Seriously, that's not a dunk
My personal opinion is that women's basketball is one of the worst spectator sports to watch.  The excitement level rivals that of curling.  It's bad enough that all WNBA franchises are in the red and barely kept afloat by revenues from the NBA, but why is there so much press coverage over a girl dunking in an NCAA game. 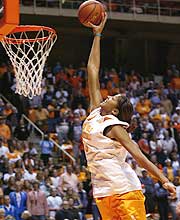 Candace Parker of Tennessee managed to "dunk" twice against Army in the NCAA tournament this weekend.  Why do I even know this?  It's because ESPN attempts to continually shove the women's NCAA tournament down the audience's throats even though most people care about this as much as they care about Richard Simmon's next workout video.

If you look at the pictures, you can tell that she barely cleared the rim.  Actually it appears in the first picture that she laid the ball in over the rim and grabbed the rim.  This is obvious because of the position of the ball.  In a true dunk, the ball would be already thru the rim.  The worst tragedy was when Ms. Parker won the McDonald's all american slam dunk contest in 2005 against the high school men.  She was able to complete a regular one handed dunk and was awarded the full 50pts whereas other kids doing 360's and windmills were awarded lower scores.