The Numbers Game: Stats are for Losers

Share All sharing options for: The Numbers Game: Stats are for Losers

"Stats are for losers.  I like winning games."  - Will Muschamp 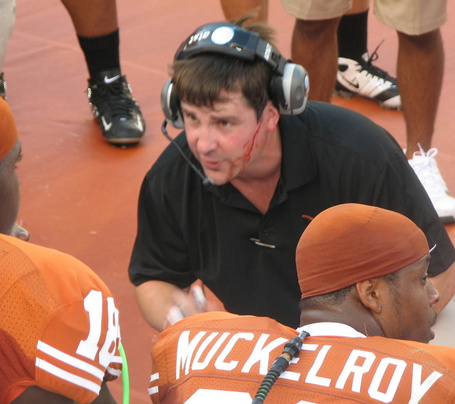 No, in fairness to his intellect and my sense of self-worth, Muschamp was saying that there's no sense in gawking over gaudy defensive statistics if you're not winning games.  And I totally agree.  Statistics other than the final score are a great way to figure out how a team is going about coming to that final score, and for extrapolating from there. But that final score is all that really matters, at a base level.  So in the sense that Muschamp's saying, "As long as we're not allowing the other team to outscore our offense, I don't care what the statistics are," I'm totally cool with that.  In fact, let's make that the theme of this weeks Numbers Game.

That should be easy right?  We'll just look at both Oklahoma's and Texas' ability to score more than their opponents (i.e. "to win games"):

Well all right then.  Advantage: no one.  Both teams are tied with each other for the highest margin of victory in division 1A.  This will require some further investigation.  Onward!

Let's take a look at the scoring margin of each team by quarter this year (all numbers are positive):

Since neither team has played a truly competitive game yet, and all games have been completely out of reach by the 4th quarter, it seems reasonable here to say that the second half scoring differences probably shouldn't have the same weight as the first half.  If the games are already out of reach and teams are playing their second string, what difference does that make to the outcome of the Texas-OU game? These percentages I'm using are completely arbitrary, but I'm going to weigh the 1st half at 100%, the 3rd quarter at 75% and the 4th quarter at 25%.  An adjusted and revised table:

We talk a lot about the points that Texas' second team offense has given up late in the game via turnovers, but we don't seem to also mention that Texas seems to have run up the score in the 4th quarter of some of these games (not necessarily on purpose on in an unsportsmanlike manner, but it's happened).  In the chart above, Oklahoma seems to have the advantage in meaningful margin of victory.  That is, OU is scoring more points than its opponents in meaningful portions of the games at a greater rate than Texas is, especially in the 1st quarter.  However, it must be noted that Texas has only been outscored in 1 quarter the entire year, and it was a meaningless quarter (the 4th quarter against Colorado, by 4 points).  Oklahoma, however, has been outscored in 3 quarters this year, including twice in the second quarter (to Cincinnati and Baylor).
What does the above chart mean though?  Short answer : I have no idea.  Possibly that Oklahoma starts out with a good game plan and then when the other teams adjust in the second quarter, some of their advantage is taken away?  OU gets out to a big lead and then coasts?  Texas comes into the game with a mediocre gameplan and then adjusts well?  Texas plays hard the whole game.  All of these are possible, and I'm open to ideas.
I think perhaps the best explanation (and most annoying) is that Texas just isn't as good as Oklahoma.  OU executes their game plans in the first quarter and absolutely dominates. They then weather the other team's adjustments while still extending their leads and then just run out the clock.  That's how they get their large margin of victory.  Texas, on the other hand, plays hard throughout the game, continually adding on to their leads, so that by the end of the 4th quarter, the margin of victory is the same as OU's.  If OU's better though, Texas at least has the advantage of having played full games this year (even if they're using second stringers by the end), while OU plays 2.5 to 3 quarter games.  This will in all likelihood be a 4 quarter game and it's possible that some advantage in the second half will go to the team that's used to playing the 4th quarter like its a real game.
And I'm officially grasping at straws now.  But you know what?  I don't care.  This week, stats are for losers, and I like winning ballgames too, coach.  So let's get out there and score more points than those toothless, slack-jawed, loudmouth douchebag yokels from the dust bowl.  BEAT OU. 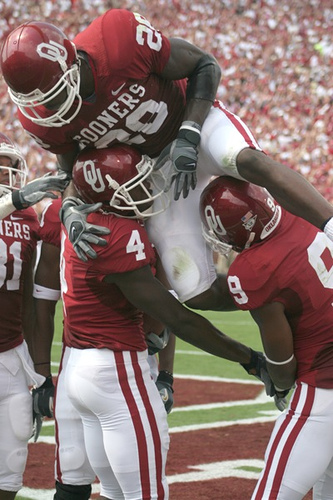