There was just too much today to confine the postgame reaction piece to the usual format. To the bullet points we go:

Awards? Nu-uh. Not today. How could we fairly decide who was more valuable to the offense among Chris Ogbonnaya, Colt McCoy, Jordan Shipley, and Quan Cosby? Could we reasonably say Earl Thomas was more valuable than Roddrick Muckelroy? What about Roy Miller and Blake Gideon? Forget all that: This was the definition of a team effort, and every guy mentioned below (and those not covered) deserve to share in the glory. No way Texas wins this game unless this Team, capital T, isn't as cohesive and selflessly committed to excellence as it has proven itself to be.

3 out of 4... Wins in this series often come in bunches, and Texas has now won three of the last four. Though Mack Brown and his staff really need to corral this year's win into a Big XII Title Game appearance (at the least) to hammer the success home, Oklahoma remains the Longhorns' lone true rival. For any and all shortcomings that may accompany any given year, the Red River Shootout is the one game that can provide for fans the satisfaction normally reserved for accomplishing long term goals.

The legend of Colt McCoy grows... He's now 2-1 in the RRS, Texas is 6-0 in a year when the Longhorns were supposed to be rebuilding for '09, and based on what I heard watching 12 hours of football coverage today, a--if not the--Heisman front runner. Though neither he nor I could care less about any individual awards, the recognition he's receiving is deserved. And Barking Carnival's EOT is right: No QB in college football is playing better than McCoy right now.

Chris Ogbonnaya is not 40, but he's a man. C-O! [clap-clap] C-O! [clap-clap] C-O! [clap-clap] One of my absolute favorite Longhorns had himself a(nother!) game for the ages, finishing with 130 yards rushing on 15 carries, and another 27 receiving yards on 4 catches. That's impressive enough in its own right, but where he (and Greg Davis) deserve credit is for how much of it came in the second half, when lesser analysts (me) were calling for a wholesale abandonment of the rushing game. Not counting the three kill-the-clock rushes when Texas was up by 10, Ogbonnaya's rush chart by half looks like this:

That's a big reason why today perhaps was both Ogbonnaya's and Greg Davis's finest game at Texas: The bulk of the success came after it looked like there was little hope to run the ball. Ryan Reynolds' injury had something to do with it, but the bulk of the credit goes to Davis, OG, and the Longhorns' offensive line, which battled hard the OU front seven.

Muschamp bein' Muschamp. That Oklahoma offense was really good, and they had more than a little success against a damn fine Texas defense. But Will Muschamp has this year blown me away with his second half adjustments and today was no exception. After Oklahoma scored on their first drive of the second half to take a 28-20 lead, Muschamp's charges forced OU into a turnover or punt on five straight drives to close the game:

Winner-winner. Even adding in the 6 plays for 49 yards after the faux penalty on the punter, the Sooners managed a mere 162 yards on 31 plays (7 points) over the game's final five drives. This, after averaging 7.6 yards over their first 36 offensive plays (28 points). Will Muschamp wins football games.

Cody Johnson scores touchdowns. With his 3 touchdown runs today, true freshman Cody Johnson has 9 on the season and has become a key ingredient for the Longhorns in the red zone. Don't sniffle: For a team that has struggled the past two years to convert red zone opportunities into touchdowns with enough consistency (38 of 56, 67% in 2006 / 35 of 52, 67% in 2007), Johnson has been a godsend--an important reason 27 of the Longhorns' 33 red zone trips have ended in touchdown (82%).

86-2. With Texas' win today behind 438 total yards on offensive, Mack Brown moves to 86-2 when reaching the 400 yards mark. And that, really, is why it's okay for fans to start dreaming big about this season: The tempered expectations this year were founded on the thesis that an offense with so few proven weapons wouldn't be able to keep pace in the Big XII while this young defense grew up.

Colt McCoy, Quan Cosby, Jordan Shipley, and Chris Ogbonnaya have in just six games turned all that on its head. And best yet...

We're not peaking yet...Though it would be hard to ask much more from this group than we've gotten already, the truth is Texas is thriving with, I'd argue, as much room to grow offensively as anyone in the country. The offensive line is good and can be better as younger contributors become more conistent; Brandon Collins and James Kirkendoll are slowly but surely getting their feet underneath them; the slim-n-trim version of Chris Ogbonnaya is finding himself as a football player; a healthy Fozzy Whittaker would add a lot to this offense; and this Oklahoma game forced Apple-Davis to expand our offensive capacity beyond what we might have had we not needed to outgun a damn good OU team today.

And that's before we even get to the defense, which it's becoming easy to forget is still anchored by as many underclassmen as veterans. And as I keep saying every week I'm asked about it on the radio, the most impressive quality of Will Muschamp's defenses is not that the unit improves game to game... It's that they improve quarter to quarter. The schedule remains daunting, but if I've said it once, I've said it a million times: Texas is going to become a progressively harder team to beat with each successive week.

Texas two-step. I've been hesitant to endorse the idea that Texas could continue to thrive in the passing game just on the backs of Quan Cosby and Jordan Shipley, but man do those two deserve game balls once again.

Defensive excellence... The 'Horns got defensive contributions from a host of players Saturday, but seven stood out as the most important playmakers of the day.

A brief word on each:

The little things... Briefly, a giant hat tip to Curtis Brown, who exemplified the Can't Quit attitude of this defense when he derailed Oklahoma's fake punt doubling back eight yards to make the first down-saving tackle.

Wrong futbol. Mike Knall may take home an Oscar, but he should have to forfeit his jockstrap for his flopping today. 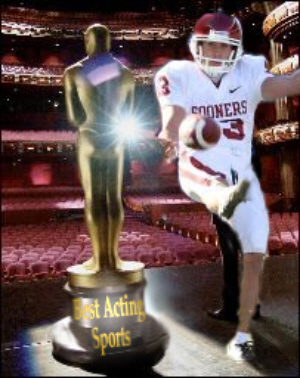 Beyond the flops... Even setting aside that atrocious roughing the punter penalty, the officiating on Saturday was horrendous. Both sides had ample opportunity to complain about the officiating, though I personally think Texas got the worst of it when you consider how badly the Longhorns' ends were being held on play after play after play--most of the time flagrantly.

Dancin' again... Did anyone else notice that the Texas Longhorns football team is dancing again? They were. And they are. The glorious Vince Young era is officially an era of the past. The 2008 Texas Longhorns are forging an identity of their own--just as loose, confident, and determined to win.