While most of the Big 12 preseason pub this year went to Texas Tech, Oklahoma, and Missouri, the Cowboys lingered well behind even Texas-In-A-Projected-Down-Year in terms of attention and/or projected strength; even among Blog Poll voters, only five of us included the Pokes on our preseason Top 25 ballots. Oklahoma State's 7-0 start has completely surprised the college football world. So who are these Cowboys and what should Texas fans expect on Saturday night?

Unsurprisingly, the best place to start might be Matt Hinton's former home at Sunday Morning QB, where in  previewing Oklahoma State during June he concluded the Cowboys could be the surprise team from the Big 12 South:

Non-Binding Forecast: A Six-Shooter Between Your Eyes or Bust. I’m a little surprised this team has received no top 25 love whatsoever – iffy record notwithstanding, it was a couple points away from nine wins last year and looks like the perfect "sleeper" bet with the likely stars on offense and promises of a revamped, readymade infusion bringing the perpetually lame D up to par. I’m not sure you’d have to be a sucker to take it, either. The defense may be too far away to put the Oklahoma-Texas hold on the South in question, but if they can take one of the four tough Big 12 road games – at Missouri, at Texas, at Texas Tech, at Colorado – I think the Cowboys are throttling their way to an eight-win regular season. At the very least, I’d be careful before I swallowed the unanimous nodding toward Texas Tech as the presumed upstart in the division.

Time will tell how Oklahoma State's story ends, but this is the week for Texas fans to take a close look as we prepare for our third straight terrifying opponent on the schedule. Starting tonight and concluding Friday, we'll spend a day on each component of the 2008 Cowboys', beginning after the jump with Part 1: OSU's Rush Offense.

I get the sense that the national perception of Oklahoma State is like that of a one-hit wonder band: Ask the average fan what they know about the Cowboys and the answer's likely to be, "Aren't they real good at running the ball?"

Oklahoma State's offense is far from one-dimensional, but it's appropriate we start our breakdown with their rushing attack--the million man army of their frighteningly explosive offensive capabilities. In truth, we're concerned with just four, but it's important to emphasize this isn't a Barry Sanders Show kind of attack; the Cowboys get meaningful contributions from three tailbacks as well as quarterback Zac Robinson:

That's three tailbacks with rushing rates that would garner all-conference recognition if sustained for 300 carries. However, not only is it hard to conceive of this (or any) group sustaining that kind of production over a full season, but a close look at the Cowpokes' rushing splits in non-con vs Big 12 play shows a significant drop in production. After OSU ran roughshod over Washington State, Houston, SW Missouri State, and Troy to start the year, their first three conference games have seen the rush production slow considerably.

What changed? First, the distribution has shifted: Highly touted JuCo transfer Beau Johnson has faded from the regular mix as "Spud" Hunter has become the tailback Mike Gundy trusts most with the football. Second, the overall production has slowed considerably. Despite what you've heard about Big 12 defenses this season, they're not quite as bad as many of their poor performance numbers suggest; at the least, A&M, Missouri, and Baylor have had athletes strong enough to deny Oklahoma State record-setting rushing numbers. (Tuesday moment of schadenfreude: If the preceding isn't much of an endorsement, it's as close to a compliment as Mike Sherman has received this season.) 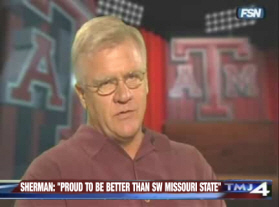 We're not far from this day. Really.

Though video game rushing numbers may be a relic of OSU's cupcakey non-conference season, the Cowboys haven't exactly struggled to run the ball in Big 12 play, and it's only fair to note that they pulled on the reins after building big leads against both A&M and Baylor. Moreover, through three conference games, the Cowboys lead the Big 12 in rushing attempts (148) and yards (621); their 4.19 yards per carry ranks third. Even at a significantly retarded pace they're still pounding the ball on the ground effectively.

The group has been unquestionably effective in 2008, but rushing against Texas on Saturday may prove to be as or more challenging as it has the past two seasons (80 yards on 21 carries in 2006; 164 yards on 45 attempts a year ago). Not that Zac Robinson is terribly concerned: Where two years ago in Austin Bobby Reid crumbled without substantial rush support, last year Robinson waxed the Longhorns in Stillwater by completing 30 of 42 passes for 430 yards and 2 scores.

Whatever the popular perception, this Oklahoma State offense is no one-hit wonder. They can run the football against the weak but have the balance to attack through the air, whether or not the run game is picking up yards. In Part 2 we discuss Zac Robinson, Dez Bryant and that OSU passing game.