Share All sharing options for: Morning Coffee Gets Colt Crazy

Relentless pursuit of perfection. Colt McCoy hasn't just approached perfection on Saturdays, but during the week of practice as well. Actually, he hasn't just approached perfection, according to Greg Davis he has actually achieved it.  Once each during the OU and Missouri game weeks McCoy completed every pass he attempted in practice. Twice more during the Missouri game week McCoy only had one incomplete pass in each practice.  No wonder McCoy is completing more than 80% of his passes and only needs to complete 63.12% of his passes for the rest of the season to break Daunte Culpepper's NCAA mark of 73.6%. I can't even think of any apt comparisons for what McCoy is doing right now simply because I've never seen anything like it. What a truly amazing season for the baby-faced country boy from Tuscola.

Return of MyBoy? Tip of the hat to juarez1729 for discovering the little nugget on espn.com that Colt McCoy plans on returning for his senior season. In the words of the man his own self:

While there is no doubt that McCoy means what he says, this isn't the first time that Longhorn fans have heard this story from players before they bolted to the professional level.  Everyone from TJ Ford to Vince Young to DJ Augustin to Kevin Durant to Jamaal Charles have uttered the same statements about returning to school, but changed their minds when staring millions of dollars in the face and weighing their chances of injury. McCoy is a different case because I'm not sure that NFL scouts view him on the same level as professional scouts saw the other players, but these things do change after the season. There's a significant chance that McCoy will be returning for a championship run in 2009.

McCoy '08. I just cant talk enough about Colt McCoy. I'm about to run out of superlatives here. I can say that the Heisman pose looks pretty good. In some ways the picture is great though because the Heisman pose in essence a good football move. It's not just the stiff arm that's about to happen to some poor fool. It's the ball positioning, held with all three points of contact. It's the bent knees, ready to explode into the open field. Okay, so maybe I haven't run out of superlatives. 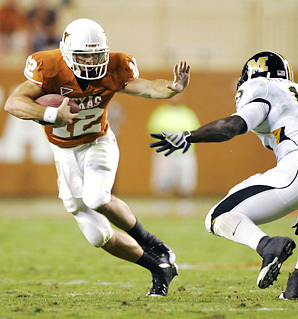 Not all of the Longhorn faithful are buying into McCoy's candidacy, though. PB is understandably lukewarm about it. Many Longhorn fans regard the Heisman with some disdain after Reggie Bush won it over Vince Young and rightfully so, because Vince deserved that trophy. If you look at some of the clowns who won the Heisman, Chris Weinke, Jason White, Danny Wuerffel, Gino Toretta and the like, you realize it doesn't really mean much to be in the company of those football players. Even ESPN called Vince Young one of the ten best football players ever. But not a Heisman winner? No one in their right mind would take any of the aforementioned Hesiman winners over Vince. Well, maybe Merrill Hoge, but that guy's just demented (too many concussions). But no Heisman for Vince. Despite all that, here's why I want Colt to win the Heisman: If McCoy wins the Heisman, I see the Longhorns being undefeated. And being undefeated means a chance at that crystal football everyone wants to hold up at the end of the year. A loss not only seriously hurts McCoy's candidacy, it also makes a national championship berth that much more unlikely, depending on if Penn State or Alabama loses. So here's my take: I want a Heisman for Colt McCoy as the Longhorns stampede their way into the national championship game.

Receiving depth spotted on the football field. After the OU game, it wasn't just the fans who were disappointed that Malcolm Williams couldn't haul in the nearly-perfectly thrown deep ball from Colt McCoy. The young receiver himself was disappointed, asking McCoy for some extra practice on high throws.

Notice anything like that against Missouri? McCoy put the ball up into some traffic, but he gave Williams a chance to go up and make a play on it, just like they had practiced, and Williams brought it in, just like they had practiced. Brandon Collins made his long play on another adjustment practiced with his quarterback, this time a sight adjustment slant on the blitz. The young receiver who didn't catch a pass in the game, but threw a nice block for Colt McCoy? James Kirkendoll. But he was the guy after the game who said he cared more about the team than not catching a pass after Brown apologized for not getting him the ball. As the season goes on and defenses commit more resources to stop Cosby and Shipley, expect the growing rapport between receivers and quarterback to lead to some big plays for the young'uns.

Series straight out the Wild West. Strange, strange things have happened recently between Oklahoma State and Texas in football. It follows the same basic pattern: The Longhorns get down early, then come roaring back. How roaring? Try 48 unanswered in 2003, followed by 49 unanswered in 2004, followed by 48 straight points in 2005, followed by 24 straights points last year in the fourth quarter to win. Think maybe Okie lite has developed a complex about that? History suggests DKR will be the scene of a wild and wacky football game on Saturday, but I expect the Longhorns to get off to a strong start, with the kind of clock-killing, confidence shattering march down the field that characterizes this football team. Perhaps Mack Brown will even consider departing from his strategy of deferring to the second half and take the football first. Trips Right took a look at the OSU/Mizzou drive charts and concluded that they bode well for Longhorn success. Mizzou went on three drives of nine plays or more, while Okie lite relied on the type of big plays that Will Muschamp refuses to allow. See the one explosive play by Missouri against Texas, which I believe came against the second-team defense. Getting off to a fast start and burying Okie lite early has the added benefit of forcing the Big 12's best ground game to take to the air. And you don't want to be one-dimensional against a Muschamp defense.