Heading into conference play, this Texas team is averaging the highest margin of victory of all of Mack Brown's Texas teams.  Sitting diametrically opposite from the 2007 ‘Horns, these guys have come out to take care of business four times out of four, with only a tiny hiccup (Bill Little says "surge") in the UTEP game for us to complain about.  The dominating performance by Rak & Co. up front and the steady progression of everyone else not playing middle linebacker has the defense on track to becoming a brick wall very stretchy rubber sheet with lots of knives behind it by the end of the season.  On offense, Colt is playing as well as anyone has ever played the quarterback position right now, aided by the fact that Greg Davis has discovered the concept of a counter (coincidence that Applewhite arrives at the same time?  You decide), and by Jordan Shipley looking as good as everyone said he was supposed to look all this time.

All cuddling aside, though, some Texas fans are not jumping on the peace-pipe train (next stop: Colt is better than Vince) yet.  We have a tailback with a conditioning problem, one with the usual starter vitriol being poured mercilessly on him while Mack and Greg make excuses, one that hasn't stood on two legs for more than one (glorious, 6 YPC) hour, and a really smart one that has a great personality good hands.  That would all be fine, if only our line could run block.  I don't know if anyone else has noticed, but we have two receivers, and they're both returning kickoffs at the same time.  Are anyone else's crazy bells going off?  Our most experienced corners are our worst ones, and our middle linebacker continues to be told either "Please don't blow this assignment" or "Just soak up a blocker, for Christ's sake."

So which school of thought are we supposed to join, then?  Well to help us decide, let's take a little walk down numbers lane... (Who saw this coming?  Not him.)

Sorry about the huge 'ness' of my char... table.  I'm  not exactly a WYSIWYGW (the last W is for Wizard!).  The gist is:  Delta(MoV) is Margin of Victory of Texas's first Big 12 game, and Avg. MoV.  SD(MoV)/Avg MoV is the coefficient of variation (CoV) of Texas's MoVs before Big 12 play.  Go ahead and wiki that.  If you didn't wiki it, then just know it's a relative measure of statistical dispersion (inconsistency, don't make me link to that belted WoW-rrior again...).  So now that I've given you a figure that you'll surely completely skip, let me give you a few that you may actually care to glance at... 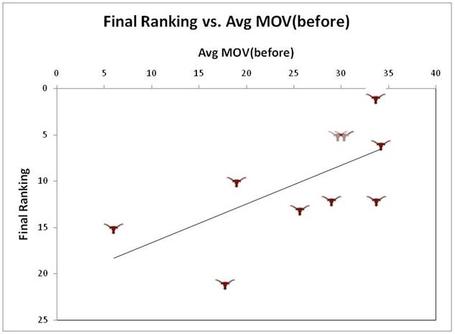 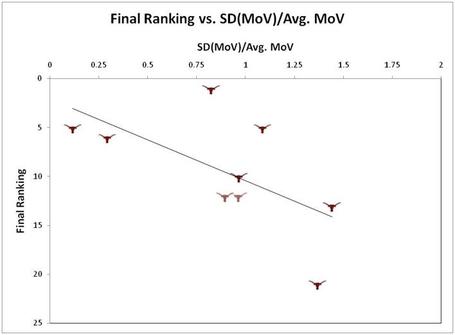 OK, first thing's first:  Did I have to change out my data markers for little Longhorns?  No, I did not.  We cool?

Secondly, I've slapped some trend lines on the graphs to highlight what I'm seeing in these.  You can see the trends rather easily for yourself:  Higher MoV, higher rank, lower CoV, higher rank.  Let's look a little closer, though...

Looking at the first graph, I see that the 2003 team finished ranked 12th despite an elite start in terms of MoV (whipping cruddy teams sure took the sting off of that Hog loss at home, eh?).  What this chart doesn't tell you is that we were ranked 5th before losing to Washington State in the Holiday Bowl.  Had we not pouted about our near BCS appearance and instead beaten the Cougs convincingly, you can see that the trend would be much more clear.  For you stat geeks, moving 2003 up to 5th would bump up the correlation coefficient for this graph up (down) from -0.69 to -0.81.  (I'm excluding 1998, just because it's an obvious outlier as Mack had yet to build Texas into "his" team and we played only two games (one against Top 10 UCLA) before heading into conference play.)

That was quite fun, but what does it tell us about this year?  This data shows that regardless of schedule, high victory margin and consistency are both indicators of a potentially great team.  Go ahead and glance back up at that table as you swallow that last sip of Burnt Orange Kool-Aid before conference play starts, and you'll see that this team has it in spades.  The numbers put this team in the same category as some of Mack Brown's better teams over the years, and it looks like a potential Top 5 team when it's all said and done.  If you count 2005, there are only three teams with CoV(MoV)s similar to this year's, and they all finished in the top 6.  Of Mack's 4 teams to average an MoV over 30 ppg, only 2003 finished outside of the top 6, and they went into their bowl game ranked 5th.

If the coaches can iron out a few more wrinkles in this team, then hang on for the ride, guys.  We may be sitting at ground zero when one of Mack Brown's better Longhorn teams hits the toughest stretch of schedule since the 90's with a full head of steam.  Cue this:

Thanks to mattadk, whoever you are, for the best Texas Football video on the freakin' internets.