The scouting reports for the two widely heralded recruits in the 2009 Longhorn basketball class are up on the website (Avery Bradley here and Jordan Hamilton here). That leaves the third member, 6-7, 205-pound small forward/wing Shawn Williams of Duncanville, TX, the lone representative of the Lone Star State in the class. While Wililams doesn't possess the elite talent of Avery Bradley and Jordan Hamilton, players like Williams who will remain and grow in the program for four years are nearly as important as the stars who remain for only a year or so. Don't sleep on Wiliams' talent, however, as he possesses good size, strength, and athleticism for his wing position. Enough talent to draw offers from Florida and Louisville, programs that aren't in the business of offering players lacking legitimate talent.

Ranked No. 72 ($) in the ESPNU 100 (Scout has him #44), Williams doesn't have the big-time scoring ability of Jordan Hamilton or the combination of length, explosiveness, and lateral quickness that makes Avery Bradley such a transcendent talent. In fact, observers believe that Williams will have trouble defending quick two-guards in college, due to the same lack of lateral quickness that limits Jordan Hamilton's defensive abilities, making Williams more of a candidate to defend opposing wing players. Rick Barnes is emphasizing recruiting larger guards like Avery Bradley (6-3 with a long wingspan) and Daniel Bejaranu (6-6) to avoid the size mismatches on opposing guards that have limited the defensive ability of previous Longhorn teams. Understandably, Barnes doesn't want players like AJ Abrams forced to guard players like Brandon Rush, even though Abrams did an admirable job against him in the home game against Kansas last season.

As you can see from the picture of Williams above, he's still a lanky kid at 6-7 and 205 pounds. He's not Kevin Durant-skinny, but looks capable of adding some strength to help him defend larger players, although with depth in the frontcourt, he likely won't be asked to guard opposing power forwards. A continued commitment to running may cause Rick Barnes to go smaller and ask Williams to guard taller, stronger players.

Williams has visibly been working on developing his body, playing his senior season at 205 pounds, 15 more than the listed weight on his ESPN page, increasing his strength by working with a personal trainer over the summer. I've said this in each of the last two posts, but the presence of Todd Wright means that Longhorn fans can rest easily that Williams will emerge from the program after four years as strong and fast as anyone in the country could make him. Adding strength would help Williams improve his ability to finish after contact, currently one of the weaknesses in his game. 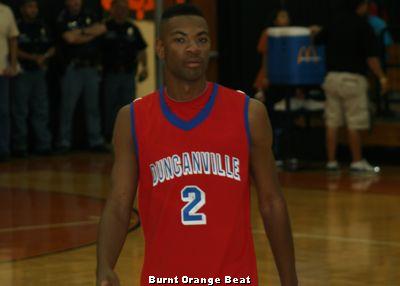 Some of the struggles with his lateral quickness could be the result of repeatedly spraining and re-spraining his left ankle, which has bothered him for several years. It's a bit of a red flag that he hasn't succeeded in strengthening the ankle, which should be a high priority for Williams during the off-season. Playing with a 100% healthy ankle could give Williams the extra half-step he needs to elevate his defensive game. Playing with good defensive posture and effort aren't the issue, which may or may not be a positive, depending on his development of more explosiveness.

Some observers also question Williams' handle, with one AAU coach saying that "he has no natural ballhandling skills." The same coach also criticizes Williams for lacking shake, meaning that he doesn't have the type of crossover, hesistation move, or shoulder shakes that characterize the elite creators off the dribble. Playing a lot of one-on-one on his own and learning to create his own shot will help Williams significantly, but the presence of Hamilton his freshman year will give Wililams time to develop as a ballhandler and creator of his own shot before being asked to carry any significant scoring load for the Longhorns.

Despite concerns about Williams being able to handle the basketball, he has improved that aspect of his game and will have another basketball season and summer circuit before arriving on campus. One observes calls his handle "rapidly improving" and notes that opponents now have to respect his slashing ability. A quick first step allows Willims to get in the lane off the catch.

The biggest strength for Williams is his ability to shoot the basketball. The same AAU coach who criticized his handle called Wiliams the best long-range shooter in the class, which is saying something considering that Jordan Hamilton has such great mechanics and range out to 25 feet, though Williams is known as being a streaky shooter. Like Hamilton and Bradley, Williams has a well-developed mid-range game, capable of shooting off the dribble or off the catch. He also uses the pump-fake well to set up a shot off one or two dribbles.

His catch-and-shoot ability allows him to work off screens and creates opportunities to drive to the basket as opponents must close out hard to avoid giving up the type of easy three-point shots that shooters like Williams can hit consistently. He understands the subtleties of moving off the ball and taking advantage of overplaying defenders with backdoor courts. His basketball IQ draws comparisons to Connor Atchley, who defines "program player" as much as anyone from Rick Barnes' tenure at Texas.

Besides an ability to rebound the basketball (though there is some disagreement about this this) and find open teammates, Williams possesses the intangibles resulting from knowing his role playing with other talented players. His Duncanville team is the best in the country ($), featuring Baylor commit Perry Jones and Oklahoma State commit Roger Franklin. Former high school stars trying to transition to being a role player in college often struggle to subsume their ego and understand how they can best help the team and fulfill the role defined for them by the coach. Wiliams is a flat-out winner, with his Duncanville team posting a 53-game winning streak finally broken in December 2007 by national power Oak Hill Academy, lead by Brandon Jennings.

Unlike Jordan Hamilton, often criticized for hunting his shot and a star mentality, Williams plays within the flow of the game, letting the situation dictate his actions, a tribute to Williams' cerebral play and the coaching he's received from Duncanville's Phil McNeely. Phil Jackson has always stressed that sense of rhythm and transcendence to his players--operating within the moment instead of operating upon it. Transcendence is the essense of playing "in the zone." Shawn Williams' high school experience and understanding of role appears to have helped him immensely in that respect. With a deep team and emphasis on accountability, Rick Barnes will demand that Williams understand his role.

Shawn Williams started his senior season strongly by dropping 34 points on an outmatched Lewisville team before efficient performances at the 2008 McDonald's Texas Invitational in Houston. The first game saw Williams score 24 points on 10-17 shooting, while filling out the stat sheet with seven rebounds, four assists, one steal, and one block. Playing again that evening, Williams dropped 21 points, securing 10 rebounds to go along with four assists and two steals. If Williams continues to post such impressive numbers, he will improve ($) on his sophomore and junior averages of 19 points and seven rebounds and 17 points and nine rebounds, respectively.

The impressive numbers provide the statistical evidence to support the visual improvements in Williams' game. His handle has continued to improve as he showed little concern for smaller, quicker defenders trying to steal the ball and a new jab step (sounds like Melo, doesn't it?) to his game. Versatility characterizes Williams' game, shown by his abiliy to post up smaller defenders and finish with his off hand. Williams reads and reacts to double teams, moving the ball and avoiding poor decisions.

As do many top high school teams, Duncanville will travel the country this season playing basketball, matching up against 2010 commit Tristan Thompson's St. Benedict's team, as well as traveling to Brooklyn to face Sebastian Telfair's former high school, Lincoln. While many players (like Avery Bradley) grow immensely competing against other top prospects on the summer circuit, few players get to play the level of competition Williams will face interscholastically.

Williams won't inspire the same type of giddy excitement reading the reports on Avery Bradley and Jordan Hamilton, but that says more about the two stars of the class than it does about Shawn Williams. In fact, you have to feel positive about a kid who displays the understanding of the game that Williams does. His ability to space the floor from the three position will allow space for the guards to operate and his size will allow him to finish in transition.

Expect him to develop into an all-around scorer before his time at Texas is complete and make a commitment to defense that could allow him to defend three positions. Versatility will be the key, as tall wings who can shoot are match-up nigthmares for even the best college programs (remember Royal Ivey defending Melo?). As a four-year player, Williams will bring stability and, eventually, experience to a program that should make deep tournament runs every season.