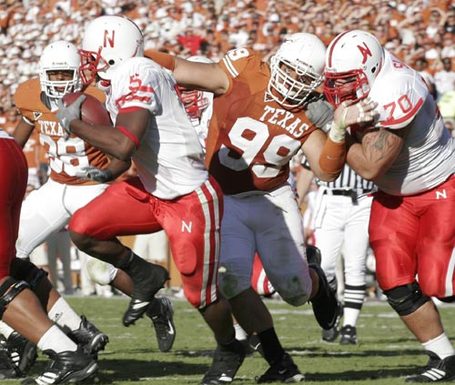 "You have to play this game like somebody just hit your mother with a two-by-four." -Dan Birdwell

The Horns face a challenge after the loss to Tech.

"We're going to go back and have a really physical practice," Brown said. "We'll go back to work. We have no choice. We'll act like it's the first game of the season."

If Texas wins this week and Notre Dame loses, we will be tied for second in all time wins.

Corraling the Rest of the Big 12

Dennis Dodd has some spoiler alerts for the BCS.

The skinny: The championship is basically down to eight teams -- the Big 12 (Texas, Texas Tech, Oklahoma, Oklahoma State), the SEC (Florida, Alabama), USC and Penn State.

The Tulsa World Conference Buzz has some tidbits about the Big 12. Art Briles was not happy about the officiating during the Bears loss to Missouri and Kansas State punt returner Deon Murphy talked some before the Kansas game.

Deon Murphy vowed he would "take one to the crib" against Kansas and served up additional bulletin board material when he said KU is "probably going to wish they recruited this whole team the way we're going to play this weekend."

Kansas won 52-21, and Murphy had a total of 11 punt return yards because the Jayhawks punted only once in 14 possessions.

Murphy told reporters he doesn't regret saying it because he is a confident dude. But, he said, "As soon as I stepped off the bus, I was a marked man."

Battle for the bottom. Colorado vs. Iowa State.

'Rounding up the Big 12 Blogs

Barking Carnival poses an interesting question: What was your favorite way to block our DE?

A coach that looks like Vince Gill and a few other look-a-likes.

Global Sports Fraternity has the entire BCS figured out.

Sorry for the short BDR, but yesterday was consumed by political coverage and covering the election for a couple of online publications. BDR will be back tomorrow with the full post.