Well, we did get fooled.  We were tricked into thinking we had a shot to stay ahead of OU, when the computers had us doomed, doomed, doomed long before the Cowboys gave up that last touchdown run in garbage time.  Still, we came much, much closer than most of you realize.  We were behind OU by one rank in both the Sagarin and Wolfe systems.  Reverse those two and we'd be headed to KC.  Sigh.

Anyway, don't completely give up hope, because there's still a chance - and it's a heck of a lot better than a Lloyd's chance in Mary... 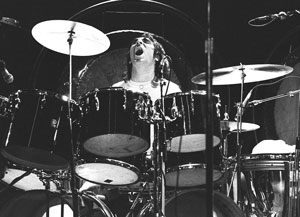 The change, it had to come
We knew it all along
We were liberated from the foe, that's all
And the world looks just the same
And history ain't changed
'Cause the banners, they all flown in the last war

I'll tip my hat to the new constitution
Take a bow for the new revolution
Smile and grin at the change all around me
Pick up my guitar and play
Just like yesterday
Then I'll get on my knees and pray
We don't get fooled again
No, no!

Damn those bastards.  There are now really only two ways for us to get to Miami.  Obviously the first is OU crapping the bed against Mizzou.  I don't know about you guys, but I feel like Chase Daniel may actually suck as much as or more than OU.  I'm not going to count on it.  The other way we get in has been discussed previously, but I want to look at it a little more.  BZ did a great job earlier with his BCS numbers post, and it gave me the idea to compare quantized rankings (1, 2, 3, 4, etc.) with continuum rankings (Texas is 2.94 instead of 3.00, kind of strong).  Let's look at it in a big old table like we normally do:

The Average column shows where a team is expected to land in the rankings given their scores in the three components.  It's basically one minus the BCS average times 25, plus one so that a perfect ranking doesn't rank you "zero".  In math, that's 25(1-BCSAvg)+1.  It gives a meaning to those awful numbers that the BCS attaches to their printouts every week.  BZ explains the concept in his post, I've just manifested it in terms of rankings instead of looking at how many poll points a team has compared to their expected score.  The benefit of looking at it this way is that it makes intuitive sense.  The BCS expected ranking is the same as the average of the three component expected average rankings, so you can see right away how many ranking points one team would need to leapfrog another, and in which polls they would need those points.  Confused?  Great, it'll make more sense when we look at our very special example:

In a Fair World, Texas Plays OU for the National Championship

That's kind of misleading, because in a really fair world, Texas would be going to KC right now and we'd get to play someone else to prove that we're number one, but this world isn't fair at all, so this is as fair as it gets now that we are where we are.  Both Florida and Texas are strong in their positions, while OU and Alabama are weak.  Right now, Florida is basically a full ranking behind Texas.  If the voters continue to vote Texas and Florida relatively the same and Florida wins the SEC, the Gators would need to gain 3 spots (relative to us) in their continuum computer ranking to pass us.  That means they would need each of the four computers that count to rank them three spots higher than they are right now, for a total of 12 computer points.  That would bring them into a tie with us, where their narrow human advantage would put them ahead.

The thing is - I don't think that they can get that many points by beating Alabama.  Their resume would have one win over Alabama, one win over a suddenly awful computer #13 Georgia, and not much else to brag about.  Plus they have a very bad loss to Ole Miss.  Texas, on the other hand, has a win over the computer #1, #13 and #20 teams (#20 and Big 12 North Champ), with a loss to the computer #4.  Hands down, Texas has the better resume, so I think Florida can't come closer than 8 of their 12 needed points in the computers.  Any teams that fall between us and Florida would widen that gap, but they could jump us in one or two polls, so we'll call that a wash.

If the humans vote us where we belong (ahead of Florida with that resume), then we're in.  They won't, though, because the last thing they want is for a trivally-decided non-conference champion to play for it all (in a rematch, to boot).  The question, then, is how much can we give up to Florida and stay ahead?  If our lead stays at 1 full ranking in the computers, then we can't be behind them in the human polls by more than 1 full ranking combined.  That's 114 Harris votes or 61 Coaches votes, spread around however you like.  Right now, Florida has us by 44 in the Harris (39% of needed) and we have them by 11 in the Coaches (They need 118% of 61 votes).  I think it's going to be close unless the coaches and the Harris pollsters start ranking us down and Florida up just to avoid the rematch.  If they vote based on who's played the tougher schedule and who has the best resume, then we're in.  If they don't, we're probably out.  This may sound promising, but do you really trust them at this point to keep ranking us where we belong instead of pulling shenanigans to try and get what they want?  Hell, some of them don't even know that Penn State lost this year, so you can bet on random luck having something to do with it.

So the gist is:  Root for Mizzou to beat OU by some miracle, because that's a free ticket to the dance.  If Mizzou doesn't beat OU, hope that they get demolished, as every #1 vote for OU is a vote for Texas at this point.  The closer Florida is to us the better.  We need to get back out on the campaign trail and convince the voters to keep ranking us fairly and not play shenanigans with their ballots to avoid the inevitable.  I'd give us a 10% chance to get past Florida based on what I've seen, with a 50% chance to get past them if the voters weren't a bunch of blockheads.

* Someone please photoshop this.

Short and sweet this week:

Hopefully whills finds this version of the graph easier to read.  I took away physical borders and fattened the bars around my words like they were illegally entering my country.  Your weirdos this week:

Alabama - You're going down, Stampy.  You've skated by with the perfect schedule full of horrible teams that everyone thought would be good, and you've barely beaten half of the really, truly bad teams you've played.  I just hope you keep it close enough so that Florida doesn't get OMG !!!11111!!!!-ed out of reach of our computer numbers.

USC - Could this be a sign?  Just before a gimme game against your horrible, awful rival across town?  With that offense?  If you sleep-walked through a 12-7 shocker it wouldn't shock me at all.

Tech - Tech is high because the computers like them a lot.  They don't play anymore games.  Meh.

Oregon - The computers are rightfully not as impressed as the humans with your shelacking of OSU.  That pissed me off.  Couldn't you have let us beat the tar out of USC in the Fiesta?  Screw you and your incredibly fast and strong monster running back that will forever haunt the dreams of Beavers both orange and pink (I'm sure) for many, many years to come.

Florida State - Oh please.  Normally I wouldn't bother hanging around down here, but this is such a high standard deviation I have to look into it.  It seems the computers still give you a little credit for having lost to Florida.  Maybe you deserve it.  I honestly think that the ACC is better than I've griped about all this year, and I can't wait to see the champ take on Cincy and then compare/contrast with the potential Boise/Utah kiddie bowl.  I don't even know if I'm kidding anymore.

Meet the new boss,
Same as the old boss...

I felt like this one came across well without links...

Again, least useful of the bunch, again highest standard deviation.  Most importantly, though, these are his top five:  Alabama, Oklahoma, Florida, Texas, USC.  WTF Billingsley?  I defy you to give me one good reason to have Florida ahead of Texas.  I.  Defy.  You.  Send me an email.

All of you faithful readers who made it this far, I encourage you to send me emails as well.  I recently received one from an Aggie who said something along the lines of "my t-sip ego can't understand" that OU should be ahead of Texas.  That's fine, but that's not what I want.  Send me an email I won't laugh at, and I'll reply to it fully either in my BCS Breakdown or in a separate post.  Ask for nerdy blog stuff, maybe I can help you out.

Finally:  Don't let me down, people.  Canvas the way we did for 45-35.  Let the voters know that we deserve to be ranked ahead of Florida, and let's get as many of them as we can to vote that way.  We're not giving up on this team, just like they didn't give up on us down 22-6 at the half in Lubbock, or down 14-3 in Dallas.  If we have to beat the Sooners twice to prove we're better than them, then that's what we have to do.  We have one more week to go, and once those votes are in they can't be changed, so let's give it one more shot.  My beard ain't gettin' any shorter overnight.