Starting today, BDR will now run on the front page, as Dime Coverage's round up is the best of its kind and risks being missed in the increasingly crowded FanPosts. Moreover, the Round Up complements -- rather than competes with -- the more analysis-focused Morning Coffee. Bear with us as we experiment with some formatting issues as well as how much to include above the cut (so Dime's exhaustive round ups don't bury everything else). And please join me in thanking her for what has truly become for Longhorns fans the essential post to start the day. --PB--

The game of football has evolved in Texas. Once a state known for producing great running backs, now it's quarterbacks. The Dallas Morning News looks at the how and why of the state's transformation.

And which state produces the best college coaches? They come from Ohio.

The Washington Post looks at the benefits and stability of the coach-in-waiting.

Once again, our condolences to Iowa State. Justin Eilers, a Cyclone linebacker from 2000-01, was shot and killed.

Football isn't just about the competition. This is one of those times. 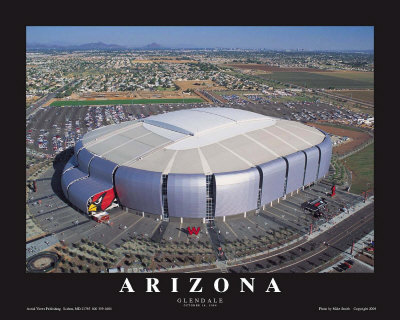 What do about that somewhat on, somewhat off running game? Mack Brown ponders the question.

Quan Cosby's maturity and leadership is a big factor in this season's success. He is also two shy of 200 receptions in his college career.

The Horns better be ready for one question to come up over and over again in Glendale.

As much as the Longhorns might enjoy the Tostitos Fiesta Bowl, they'll be wishing they were a couple of thousand miles away, in south Florida, preparing for a national championship game. No one is questioning the Longhorns' qualifications, just whether they want to be in the Valley of the Sun against Ohio State.

The Texas players will probably be quizzed Monday, when they arrive in Phoenix.

Charles McClure, Lake Travis View, has first-hand knowledge of Chris Whaley, Paden Kelly and Garrett Gilbert. He is looking forward to the future.

Like I said, I have seen the future of UT football, and lo, it is good. 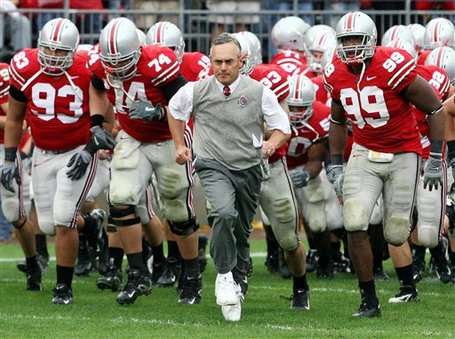 Ohio State tight end Rory Nicol has accepted his role for the team. It isn't about the individual, but what is good for the team as a whole.

Like many young players, Nicol came into the program hoping to play a starring role, which in his mind meant catching passes and scoring touchdowns.

That hasn't happened at Ohio State in recent years. Not since 2003, when Ben Hartsock had 33 catches, has a Buckeyes tight end been heavily involved as a receiver.

Since then, the high-water mark for an Ohio State tight end is 16 catches. This season, the tight ends have caught 10 passes -- six by Nicol and four by Jake Ballard.

OSU landed last year's most highly sought football recruit in the country, Terrell Pryor. Here the past year of his life.

Pryor replaced Todd Boeckman as the starting quarterback, but you might see both Boeckman and Pryor on the field at the same time in the Fiesta Bowl.

No matter what, the Fiesta Bowl will be the Ohio State swan song for senior quarterback Todd Boeckman, and sources close to the program told The Dispatch that coach Jim Tressel might have a duet in mind for the former starter.

They said don't be surprised to see Boeckman and freshman starter Terrelle Pryor on the field at the same time for some plays when the Buckeyes take on the Texas Longhorns.

It will be the final game of Person's five-year career, and the final chance to honor Armic and Edna's late son Doug, a Xenia schoolboy star who went on to play for Ohio State, just like Person. Doug Adams was one of the famous "Super Sophs," a starting linebacker who helped lead the Buckeyes to the 1968 national title.

He was killed in a bicycle accident in 1997, and when Person signed to play for OSU in 2004, he chose to wear Adams' old number in memoriam to his hometown hero.

The Buckeyes are playing for more than just a bowl win.

Ohio State coach Jim Tressel is aware of all the snickering taking place behind his back, directed at his team's miserable failures in recent big games.

It seems most college football fans and media observers consider the Buckeyes a bunch of overrated chokers who can't compete with the nation's best teams. They've come to that conclusion because the Buckeyes have played poorly in four nationally televised games the past three seasons.

How will Jim Tressel motivate his players for the game? He probably has no idea.

Eleven Warriors puts together a fantasy game between all-time greats from both schools. Of course, they believe the Ohio State team would win.

I see a close game, but – all homerism aside – I think Ohio State wins this one in solid fashion – say, by 10 points or so. 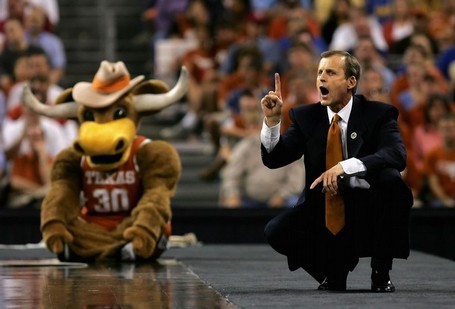 Texas beat Wisconsin at their home court in Madison. It is a tough place to play.

A.J. Abrams scored 21 points to lead the Longhorns (10-2), but Texas’ rebounding made the difference.

"We didn’t want to come in here and let them out-tough us," Abrams said. "I think we did a good job of cleaning up the glass."

Jai Lucas, the former University of Florida guard, will transfer to Texas.

Lucas started all 36 games as a freshman at Florida but decided after one exhibition game before this season that he would leave. He told Houston television station KRIV on Sunday that he chose the Longhorns over Rice and Baylor.

"Texas has always been my dream school. I always wanted to go there," he said. "I hope I can come in and contribute and be a part of something big."

Lucas said Texas coach Rick Barnes was a key to his decision.

Collegiate Baseball 2009 Preseason Division I Ranking has Texas pegged at the 10th spot. Texas opens their 2009 season with a weekend series against Illinois-Chicago at UFCU Disch-Falk Field from Feb. 20-22.

Did you know UT has an ice hockey team? 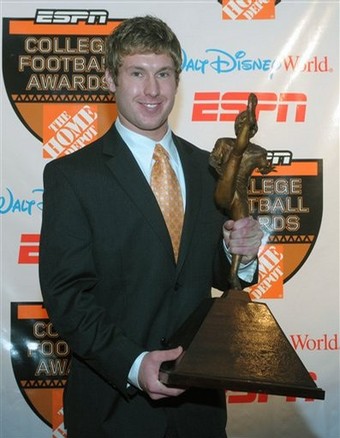 Glory is fleeting, but obscurity is forever. ~Napoleon Bonaparte. Oklahoma State punter Matt Fodge has experienced both. His position is one that tends to go unnoticed, but then Fodge was selected as the winner of the Ray Guy Award.

Since winning what his position coach, Joe DeForest, refers to as the Heisman Trophy for punters, Fodge has enjoyed the limelight often reserved for quarterbacks, running backs and receivers.

"It's been really fun," he said, "probably the most fun since I've been here."

Just call him Mr. Irrelevant. Zac Robinson got lost in the shuffle of talented Big 12 quarterbacks, but his stats proved otherwise.

Among the national leaders in pass efficiency, he ranked fourth. Bradford was first, McCoy third.

Robinson, who has thrown for 2,735 yards and 24 touchdowns, has scored seven more touchdowns on the ground while rushing for 508 yards.

ESPN's Tim Griffin lists his 30 most important moments of the 2008 season.

Are Big 12 defenses too soft?

Easier said than done. How can Oklahoma stop the Florida offense and especially Tim Tebow?

"A lot of what they do, you see it, it’s basically almost like running the wishbone," Sooner coach Bob Stoops said. "Tim Tebow is the quarterback, they motion guys in and they’re running the zone read, the option off of it."

The emphasis for the Sooner defenders in preparation for Florida will be reading their keys and sticking to their assignments.

Stoops was referring to the three juniors who left OU after last season. Wide receiver Malcolm Kelly and linebacker Curtis Lofton went in the second round after being told by agents they were first-round material. Cornerback Reggie Smith slipped to the third round.

"You know where all the projections were a year ago," Stoops said. "And none of them went (that high)."

That means Stoops will use last year's draft to make sure this season's juniors are aware of what could happen if they leave. And to tell them how much more money they'll make if they stay in school another season.

OU's offense has been tough on defenses his year, but Florida is not worried.

"They haven't played against us. . . . Nobody puts 60 points up on us," declared Florida defensive back Joe Haden.

"It's a challenge for them to come against us, honestly, because they haven't seen a defense like us," Haden said. "With the speed and the physical play and just knowing our assignments and just flying around. They probably played some good defenses, but our defense is definitely one of the top."

And, forget about all those fancy numbers, Haden said. Forget about predicting a 100-98 football game in Miami. He wants blood, guts and spit to determine the winner, not flash and dash.

"Whichever defense is going to step up, that's who most likely is going to come out on top," Haden promised.

The word must have gotten back that people don't think much of Big 12 defenses.

If Florida's not careful, they might run into a talented defense that causes some three-and-outs. Or at least that's what Oklahoma State All-American receiver Dez Bryant wouldn't mind seeing.

"When Jan. 8 comes around, we'll all see what the answer is," Bryant said."And if Oklahoma comes through, it'll be self-explanatory how good our conference is. If Oklahoma wins, nothing too much (bad) will be said about our conference again."

If Sam Bradford leaves OU for the NFL, who will be next in line?

The Florida Gators still have a little Stoops in them today.

The hoops teams have followed the leads of their pigskin peers. Five of the 12 league teams are ranked among the top 30 nationally in scoring offenses.Making Mike Leach proud, Texas Tech is the highest-ranked (fifth in the country), and sure to put a smile on Chase Daniel's face, Missouri is close behind in eighth, tied with Oklahoma State.

Daniel Blank, Sporting News, looks at who will be the spoiler in the Big 12, breaking up the Oklahoma-Texas monopoly.

SI's Seth Davis likes his college basketball where it belongs... in college.

It's tough enough watching so many sparsely-attended games being played during Thanksgiving week in exotic locales, but to have all these neutral-court contests being scheduled well into December is bad for the game. I would submit to coaches that there are worse things than losing a road game. The players prefer to play in on-campus arenas, the fans have a better time there, and it makes for much better television.

The bottom line is, college basketball belongs in college. If we wanted to watch hoops played in antiseptic environments at half-empty arenas, we can watch the NBA.

The College Football Guys put out their Christmas list. Texas Freshman safety Blake Gideon was first on the list. Ohio State got a gift, as well.

Texas and freshman safety Blake Gideon - A second chance at an interception that would have ended the "Miracle in Lubbock" and given the 'Horns a January trip to Miami over Glendale.

FoxSports Pete Flutak has his Christmas list for all 119 teams.

The Holiday Bowl definitely has an upside for the host city. With the economy tanking, tourism dollars from Oklahoma State and Oregon fans are flowing into San Diego.

Mike Gundy will receive a $400,000.00 bonus for taking the Oklahoma State Cowboys to a third consecutive bowl game. Bob Stoops only gets $250,000.00 for the national championship.

The picture formed by the data is one of schools frequently spending more than $1 million annually on academic support, with some spending hundreds of thousands of dollars more in 2008 than they did in 2004, the AP found. Eight BCS schools reported spending increases of more than 70 percent in the last five years. Four -- South Florida, Illinois, Georgia and Kansas -- more than doubled spending.