Mike Huguenin, Yahoo Sports, has the 2008 Stories of the Year.

Smart Football discusses Gus Malzahn's spread offense. The article goes into the different variations of the spread and the teams that use it effectively.

But nobody does what Malzahn does. If some no-huddle teams, like Franklin's, are light-speed, then Malzahn's spends the entire game in something akin to "ludicrous speed."

Texas and Ohio State are in Glendale and the Buckeyes are just darn glad to be there.

Texas and Ohio State arrived Monday to begin Fiesta Bowl preparations, and the Buckeyes didn't wish they were somewhere else.

"We are so excited to be here," Buckeyes coach Jim Tressel said after stepping off the team's charter flight from Columbus on a sunny, 60-degree morning. "For whatever reason, I'm more excited about this one than any other game I've ever been a part of."

The third-ranked Longhorns (11-1) landed a few hours later, and they said all the right things about looking forward to next Monday night's meeting with the No. 10 Buckeyes (10-2) in nearby Glendale.

But if Texas had its druthers, its flight would have been bound for South Florida, site of the Bowl Championship Series title game.

The Dallas Morning News has the future of the Horn's offense. 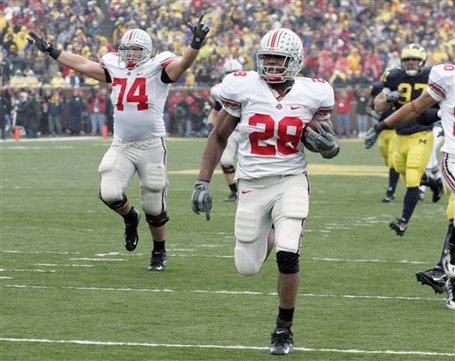 Good news for the Horns. Jim Tressell runs a very successful program but his track record of wins after a long layoff is not that good.

Eleven Warriors is counting down the days and profiling Sergio Kindle.

The unsung heroes. Ohio State's walk-on players have a very important role in the program but live in obscurity.

"I couldn't imagine being in that role," said Malcolm Jenkins, Ohio State's all-American cornerback, who appreciates the contribution of those who are. "They have the same passion and give the same effort. I don't treat them any differently."

Walk-ons are promised nothing at the start, can be cast off at any time and risk injury against teammates who often are athletically superior. They're segregated from some team functions by NCAA rules and pay their own tuition and board.

Senior Day honored a very special Buckeye player. Tyson Gentry, a walk-on, suffered an injury during a 2006 practice and is struggling to walk again.

Missouri beat Northwestern in over time in the Alamo Bowl.

Next up for the Big 12: Holiday Bowl.

“I’m a man! I’m 40!” became a catchphrase. “I should have trademarked it,” Mike Gundy says dryly.

Oklahoma State's Mike Gundy is best known for his infamous rant, but he happens to be a pretty good coach.

See, Gundy might actually be a pretty good football coach. He’s got Oklahoma State in its third bowl in four seasons, and somehow got a $400,000 bonus for doing it, which is a pretty darn good accomplishment on its own, if you think about it. A win Tuesday would mean the school’s fourth 10-win season — and the first since Gundy was the quarterback, 20 years ago.

In just a few years, he’s gained a reputation as an offensive innovator, orchestrating the game plan and calling the plays for one of the nation’s best offenses. The Cowboys’ three losses this season were to teams ranked no lower than No. 3 when they played, and they beat Missouri when the Tigers were ranked No. 3.

Texas Tech has been successful in past bowl games and they do not plan to change a thing.

Tech quarterback Graham Harrell and offensive linemen Rylan Reed and Brandon Carter said Sunday the key to the Red Raiders' string of five wins in their last six bowls is sticking to their normal game-week routine.

"When you stay in a routine like that, it helps," Harrell said. "[Coach Mike Leach] stresses that the only reason we're here is to win a football game."

Leach, though, thinks another year at Tech will be beneficial to Crabtree.

"Obviously it’ll be best for him to stay,"’ Leach said after Sunday’s practice at Texas Stadium. "I think the NFL would say it that way, too, just because if you’re good enough to play they’ll eventually get you.

"If you’re more polished when you get there, your chances are higher."

If Kansas beats Minnesota on Wednesday in the Insight Bowl, they will have 20 wins in the past two seasons.

"There’s a lot on the line, and it’s bigger than any of the players. It has a lot to do with the stigma that’s been placed on OU in big games. We pretty much want to silence anybody who has had anything to say by coming out and taking care of it." — Strong safety Nic Harris on ending OU’s BCS bowl slump.

Gator Country looks at the match up between the Florida defense vs. the Oklahoma offense.

With the loss of DeMarco Murray for the title game, Oklahoma's backfield will need to fill in.

"We will miss DeMarco because he is a great player," center Jon Cooper said. "You always will miss someone like that who has contributed all year.

"But, we are lucky enough to have depth in that position and you saw in the Big 12 championship how Mossis Madu stepped up."

The loss of DeMarcus Granger may also hurt the Sooners.

"The bread and butter of what they do is the run game, up inside," Oklahoma coach Bob Stoops said. "They give you the veer inside or the quarterback keeping it. That's a large part of what they do."

And that's what makes the loss of OU defensive tackle DeMarcus Granger, sidelined by back surgery, so critical Jan. 8.

"He's really feeling much better now. It's all gone well. We're happy for him for that. But we do miss him," Stoops said. "He's probably our most physical run (defense) guy up inside. Those other guys now just have to step up and play well."

Millions of dollars or living in Oklahoma another year... tough choice. Bob Stoops believes his players will make wise choices about their NFL careers.

"I feel our guys are more educated and more wise about what the possibilities are and the advantages of staying in school,” Stoops said.