Prepare yourself for the disappointment. Arkansas' basketball team upset No.4 Oklahoma.

ESPN's Bruce Feldman looks at the teams with the most to prove in this year's bowl season. Who gets the No.1 spot? The Sooners.

Stoops was "Big Game Bob" heading into the Sugar Bowl five years ago, before OU lost the BCS title to LSU. The next year, the Sooners got pounded by USC, 55-19, to lose another title. After that, there was the gut-wrenching loss to Boise State in the Fiesta Bowl, and then last season's stunning upset loss to West Virginia, making it four consecutive BCS bowl losses in a row over five seasons.

Brian Orakpo is ready for the QB combo, just in case the Buckeyes decide to play both Terrelle Pryor and Todd Boeckman at the same time.

"If he wants to catch the ball on a slant, here we come," Orakpo said with a smile after arriving in Arizona on Monday afternoon. "That's the name of the game. We'll see."

"Pryor is a running threat, so we have to make sure we contain him, and Boeckman is more of a pocket passer, so we have to get a pass rush on him and get to him," Orakpo said, correctly reciting the OSU QB primer.

And what does Orapko think of Chris Beanie Wells?

"I like to compare him to the guy from the [New York] Giants, Brandon Jacobs," Orakpo said. "Beanie Wells is very similar because he is so big and so powerful, but he is very fast like a speedy running back as well. We have to be prepared for that. He is a great running back that can make huge gains on his feet so we have to stop the run."

Colt McCoy gets another shot at Ohio State and James Laurinaitis.

Colt can't take out the trash because he needs to get to Arizona.

Quarterback Colt McCoy is anxious to get back to football.

"There comes a point when your mom asks you to take the trash out, so it was time to leave home and get here," McCoy said at a press conference at Phoenix's Sky Harbor Airport. "Those days off are nice, but now it's time to go back to work."

According to AZCentral.com, the Fiesta Bowl is sold out. 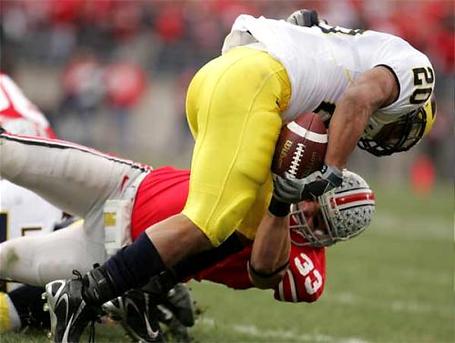 Jim Tressell exited the plane in Phoenix wearing... the vest.

Cleveland.com has the Buckeye practice blog. Nothing terribly exciting except that Jim Tressell confirmed the possible QB combo.

Tressel repeated his plan to play Terrelle Pryor and Todd Boeckman together in the backfield at times.

Ohio State cornerback Malcolm Jenkins is confident, but he does not place himself in the top tier of OSU defensive backs.

"I don't think I'd really stand a chance," he said when asked about being mentioned with OSU's best. "The only thing that would really help me is I won the Thorpe Award, and not all those guys have done it. That's the only way I can get in the conversation, in my book."

Eleven Warriors profiles Quan Cosby. They are also planning to send gifts to the Longhorns hotel.

Texas Tech right guard Brandon Carter stands out. Carter is 6-7, 354 pounds, but what really sets him apart is his distinctive style.

Most of the last three seasons, Carter has been known for his game-day appearance.

He hits the field with his face painted in a way that resembles former professional wrestler Ultimate Warrior or Batman's arch-enemy, the Joker. His Mohawk haircut is spiked up, and sometimes two-toned. His piercings and numerous tattoos complete his intimidating look.

The Raiders promise that Ole Miss will see some defense in Dallas.

In an argument that rivals the timing of the chicken and the egg, McNeill, the defensive coordinator for No. 8 Texas Tech, believes defenses in his league post uninspiring numbers because of the quality under center, not that quarterbacks have the gaudy numbers because the defenses are bad.

"We face a top quarterback every week," he said. "You can't get caught up in the stats. That's what has to change, people who hang a hat on stats. The ball is going to get moved on you, now. Just understand it. I accept it. I like it."

And Tech is extremely proud of what their defensive unit has accomplished this year.

Nebraska takes on Clemson in the Gator Bowl. Cornhusker quarterback Joe Ganz will end his collegiate career and hopefully get out from under the shadow of the outstanding QBs in the conference.

"The competitive part of you might want to match those guys, but I want to win games more than I want stats," Ganz said. "We have a lot of weapons on this team with a lot of balance. No one dominates, because everyone has talent. It's my job to manage that and manage the game."

The Kansas City Star was less than enthused with Missouri's win over an inferior opponent in the Alamo Bowl.

When he was handed the microphone at the Alamo Bowl trophy ceremony, Gary Pinkel shrieked: "How ’bout dem Tigers?!?"

The one I watched was an embarrassment for the Tigers. An inferior opponent had outplayed them for most of the night, settled for a moral victory in the fourth quarter and gave up in overtime.

Oklahoma State lost to Oregon in the Holiday Bowl.

Tim Griffin's Mailbag is back. A reader wants to know why Mike Leach has not signed his contract.

Big 12 vs. SEC. Michael Rosenberg looks at the big question this season.

Urban Meyer has the bowl routine down. He believes how teams handle the long break between the end of the regular season and the bowl game makes the difference.

"I think that's one of the challenges of preparing for a bowl game,'' Meyer said. "You always have too much time on your hands, especially when it gets near Christmas time."

Sam Bradford could be in for a major pay day if he decides to go to the NFL after this season.

Scouts Inc., which does ESPN's analysis for potential NFL draftees, has Bradford as the No. 2 overall prospect and best quarterback if he decides to come out.

It the analysis holds true, that would mean big money for Bradford.

"I was a real big Gator fan growing up. Obviously, when you are from the same town you will be influenced that way, and I still have tons of friends in Gainesville," English said. "Before that I came from Scotland, so I didn't have any other thing to push me toward another team. I can remember watching them on television all the time and wondering what it would be like to be out there."

Go Owls. Rice gets their first bowl win since 1954.

Slate.com has an article on race and coaching. The Sports Economist has more analysis.

The always entertaining Bring On The Cats has another Big 12 adventure. The schools are celebrating the New Year with Longhorns as host.