The Blog Poll is live with the preseason poll out and up for discussion. Which can only mean the return of the Blog Poll Roundtables. Our preseason edition is hosted by the ever-entertaining Hey Jenny Slater.

NOTE: I rather (over-)enjoyed the first question Doug provided, which is why the remaining questions receive mini-answers.

1. In his "visiting lecturers" series posted on Every Day Should Be Saturday over the past few months, Orson Swindle asked each participant to explain which country, during which historical period, their team most resembles. Let's bring everything up to the present day and ponder: Which current sovereign nation is your team? Or to look at it another way, how does your team fit into the "world" of college football?

One tempting choice is Russia, with Will Muschamp playing the role of Vladimir Putin, not formally the head of state but... yeah... leading the war charge. In my mind, though, the best comp for Texas right  now has to be China. 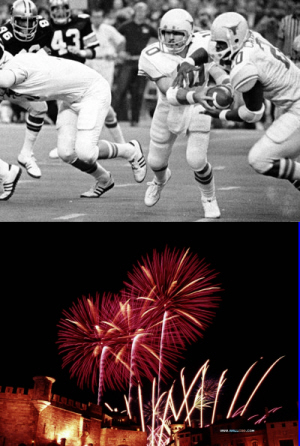 Think back to your 8th grade social studies class and you'll likely remember learning that 99 out of every 100 inventions came from the Chinese. The reasons are numerous, but the single most important is the embarrassment of riches the Chinese enjoyed in terms of natural resources. Long before us Americans exploded onto the scene with our own hyper-abundance of natural resources in the New World, there were the Chinese.

However, for all the centuries of success that China enjoyed, the arrival of the European Rennaissance and Enlightenment knocked China off its feet. Historians  have focused a great deal of scholarly energy trying to understand why, because the most important factor in their successes (abundant natural resources) was still present when the struggles began. Though the details of what happened to China are far, far beyond the scope of this post, the critical problems for China might be roughly summed as follows:

(1) Chinese people's method for science/invention was trial and error. The development of the scientific method in Europe allowed the West to surge very quickly ahead of the Chinese.

(2) As the global landscape changed and China's population continued to soar, the Chinese were forced to change the state's raison d'être--which theretofore had been more or less exclusively focused on internal, social reproduction concerns--to a new game of global chess, in which nations compete, there are winners and there are losers. China was ill prepared and found itself behind from the starting gun.

(3) Concurrently, China started to face a change in the relationships between the national government and regional interests.

That's not an exhaustive list and it's certainly oversimplified, all things considered, but for the purposes of this post, it'll do nicely to frame another rise and fall that's more dear to our own hearts: Texas football.

The China story certainly sounds familiar, doesn't it? Like China, Texas football was an early powerhouse thanks to an abundance of natural resources within its huge borders. And like China, the arrival of the modern era saw Texas collapsed into a deep slump, despite enjoying the same natural advantages that had defined its early success. Drawing rough parallels from above, we might say:

(1) College football changed in the 1970s and 80s and Texas was slow to adjust to modern facets of the game. After Akers' run in 1983, Texas fell from the national scene completely.

(2) Like the transformation the Chinese state had to undertake, Texas would be required to overhaul its entire football culture to compete in the modern era. Like China, Texas was very slow to do so. The game did not wait.

(3) And finally, Texas saw a change in its own regional relationships, as national recruiting, changes in scholarship rules, and a steady increase of strong competition nearby broke Texas' stranglehold on the state.

With all that said, Doug's question is where one's program might fit in the current global landscape, but with that background laid out, it's not hard to see why China's the right comp. Both Texas and China are big time powers again; both have modernized and once again maintain excellent control over resources in their regions. China's crowning moment is in progress as we speak in Beijing, while Texas' mountain summit came in Pasadena.

The analogy works on a number of other levels, as well. Mack Brown is undoubtedly running an elite program right now, but some of his core philosophies have held the program back. The same is true in China, of course, where the capitalization of markets has brought with it an explosion of wealth, but not as much as there could be without state restrictions.

The good news for both Longhorns and Chinese is that they're already back among the top and, slowly but surely, keep taking steps towards realizing their full potential.

2. Every preseason roundup has to have some discussion of who's overrated, but let's go beyond that. Which team do you think is poised to crap the bed in the biggest way this season relative to high expectations, and which game do you think will begin their slide into ignominy?

Clemson seems the easy answer here, but can I root for LSU? I think so. Les Miles had a lot go right for him last year. Despite the loads of talent, I could see things getting messy, if for no other reason than to restore karmic balance to the universe.

3. On the flip side of that coin, which team do you think is going to burst out of nowhere to become 2008's biggest overachiever -- this year's version of Kansas '07, as it were -- and what's going to be the big upset that makes us all finally sit up and take notice of them?

Let Texas fans all pray together that it's not Florida Atlantic, which is the clear conference favorite and, if they knock off Texas in Austin next Saturday, could have a Boise State-like run.

Aw, hell, even giving Texas the nod next weekend, I'm still choosing FAU, and if we're not the upset that turns heads nationally, I'll say the Owls get some national love by knocking off two Big 10 opponents on the road in back-to-back weeks: Michigan State and Minnesota.

4. Here's an "I'll hang up and listen" question. I put Ohio State and Oklahoma #1 and #2, respectively, despite their recent high-profile BCS face-plants. Where did you rank those two teams, and did those BCS issues have anything to do with it?

I've got Oklahoma #2 and Ohio State #4 on my ballot. Despite enjoying immensely the BCS failures of each school, it's a non-issue in 2008: If the Buckeyes win at USC, they'll have proven themselves worthy contenders; if Oklahoma runs the table in the Big 12, ditto.

5. Last season was a statistical outlier in countless ways, not the least of which was the fact that we ended up with a two-loss team as national champion. Do you think anyone plays a strong enough schedule to get MNC consideration as a two-loss team this year? Conversely, do you see anybody managing to sail into the national-championship game undefeated?

No on a two-loss title-game participant; sure-maybe on an undefeated team. If Ohio State beats USC, I may even be probable.