The first prospect personally approved by Will Muschamp his own self, the most outstanding aspect of Nkwopara's skill set is his speed, especially for a linebacker. With a new paradigm developing in the Big 12, if not college football in general, a new type of linebacker must emerge to deal with spread offenses. Rather than being able to play downhill the majority of the time, the new spread linebacker must be able to play sideline to sideline, possessing lateral quickness and the ability to effectively defend slot receivers (read: not Scott Derry). Nkwopara appears to possess those abilities, as well as significant strength for his size. When Muschamp saw Nkwopara on film, he didn't know where to play him ($), but he did recognize that the kid is a football player. 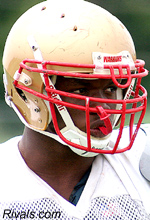 In addition to the speed factor, spread linebackers must also be strong enough to take on and shed blockers. To improve in that category, Nkwopara devoted the offseason before his senior year to improving his raw strength, his footwork, and his flexibility, adding ten pounds of muscle and increasing his bench press to 340 pounds and his squat to 470. The work paid off, as Nkwopara registered 100 tackles during his senior season, earning Defensive Player of Year honors in his district.

Lateral quickness and hip fluidity are important qualities for any linebacker, but more important in the Big 12, as mentioned above. Nkwopara possesses both those attributes ($), showing off the fluidity and mirroring ability that defines the best defensive backs, also allowing him to mirror the ballcarrier on running plays. His playmaking ability is evident by his propensity to always be around the ball, something of an intangible strength made tangible by his obvious speed. That speed allows Nkwopara to blitz the quarterback with great success ($), but he also shows off the ability to break down and change direction, with acceleration that matches his top-end speed. In addition, his jumping ability negates the size advantage possessed by tight ends.

Size is the first obstacle facing Patrick Nkwopara and the most likely reason he receives so little love from recruiting services. He's listed at 5-11, but looks more like 5-9 or so. In the SEC, that's a serious impediment, but Nkwopara won't be playing in the SEC. It's relatively unusual for Texas to pursue players with non-prototypical size, which makes his offer something of an anomaly.

The lack of size most effects Nkwopara when tackling larger running backs in space, failing to create the leverage to deliver the blow, but instead absorbing it. He likely won't look like Blake Gideon trying to tackle Angus Quigley, but in games against larger running backs, Nkwopara may not play or may play a more limited role than usual. Mitigating that concern is the presence of Tariq Allen in the same class, a player who most certainly can tackle larger running backs.

Shedding blocks is another issue for Nkwopara, an ability, of course, that Bobino never displayed in four years at Texas and yet started for most of those. Nkwopara struggles mostly when allowing offensive lineman to get into his body, a result of the type of poor technique of which Muschamp and company should rid him.

Nkwopara's size may lend credence to unfavorable comparisons to Rashad Bobino, but his raw speed nullifies those concerns in my opinion. Unlike Bobino, Nkwopara will work much more in space than everyone's favorite kamikaze linebacker. As far as a potential move to safety, the Texas coaching staff hasn't indicated to the Nigerian-born commit that they are considering such a move, but Nkwopara's speed gives him the ability to operate in space in such a way that he could draw coverage assignments that most linebackers simply aren't fast enough to execute. It's conceivable that the Longhorns could develop a type of "rover" position for Nkwopara to play, a sort of safety/linebacker hybrid capable of coming up and stopping the run when necessary and dropping back into coverage in passing situations.

It's also easy to see Nkwopara as nothing more than roster filler, especially in light of his ranking by Rivals, which is tied with Kyle Kriegel for the lowest in the class, at 5.5. Want evidence to the contrary? Will Mushcamp likes the kid. That's enough for me. It may take some time for Nkwopara to find the field, but with the proliferation of spread offenses in the Big 12, the South Grand Prairie product will find a niche with the Longhorns, if for no other reason than Will Muschamp is his coach and will put him in position to succeed. Let me repeat that for the Nkwopara haters out there: Will Muschamp will put him in a position to succeed.

The mental aspect of the game will be paramount for Nkwopara in college, particularly in reading and reacting to plays quickly to keep him from needing to take on blockers regularly. However, his ability to play in space means that he won't be manning an inside position in college and will likely play off the line of scrimmage to keep him out of the most serious traffic and blockers looking to find linebackers at the second level. If nothing else, Nkwopara possesses the skill set to make plays on special teams, certainly a major plus considering the significant struggles in covering kickoffs. As a kid with a 3.75 GPA and enrollment in every Advanced Placement class he can take, Nkwopara personifies the type of student/athlete Mack Brown covets and displays the intelligence and character to make the most of his physical skills.

Here is the Patrick Nkwopara Story.