Share All sharing options for: Bevo's Daily Round Up 1.13.09

The Texas Longhorns upheld their end of the bargain this past college football season. However, bowl meltdowns by Oklahoma, Texas Tech, Oklahoma State, and Missouri knocked Texas down to fourth in the final Associated Press rankings.

The Horns are considered the team to beat in 2009.

Texas, the team that Florida should have played in the BCS title game instead of Oklahoma, is our team to beat in 2009. After sharpening up versus Louisiana-Monroe, Wyoming, Central Florida, UTEP and Colorado to begin the campaign, the Longhorns will take a long break before going to Dallas and making it two in a row versus the Sooners. After that, the stiffest test for Texas will be its Oct. 25 date at Oklahoma State. With Colt McCoy and most of his offensive line back in the saddle, the Longhorns will be tough to keep pace with all season long.

Rick Barnes believes the Big 12 race will not sort itself out soon.

But Barnes warned that the title chase will take much longer to sort out.

"We’re going to have a great race this year in our league," Barnes said. "I think the teams are very evenly matched. Right now, unless somebody just takes it and goes with it, I don’t see a real dominant team. I think every game is going to be real competitive. Teams are going to have to win at home, and the team that wins the league will go on the road and get more on the road. That’s what will determine it."

The Horns lost to the Sooners. 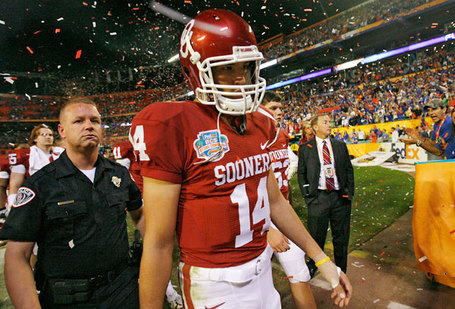 Congratulations to Mike Leach. The Red Raider head coach picked up another award this season.

Mike Leach added another feather to his cap as the ninth-year head coach was named the FieldTurf and Howie Long Divison I-A Coach of the Year on Sunday at the annual American Football Coaches Association convention in Nashville, Tenn.

Rivals.com stands up for Bob Stoops and his losing record in big games.

We bring this up for two reasons: One is to show off our knowledge of English poets; the second is in relation to football – as in, folks who criticize Bob Stoops for dropping to 1-3 in title games are short-sighted.

Yes, obviously it's better to get to the title game and win it. But, as with love, just getting to the title game is something to be celebrated. After all, OU fans again could live through the morass that was Sooners football as overseen by Gary Gibbs, John Blake, etc., one more time.

And Dr. Saturday does, too.

OU's offense may be decimated but the defense could be one of the best in the Big 12 in 2009.

While the offense will be decimated by graduation on the line and at wide receiver the defense could return up to nine starters and loads of depth on the front seven.

Don't they talk? Bob Stoops has an idea if Sam Bradford will return to OU or leave for the NFL draft.

Missouri's Chase Daniel played the latter part of the season with an injured thumb.

While training for the next chapter of his football career in Houston, Daniel revealed to the Tribune that he sprained a ligament at the base of his right thumb - on his throwing hand - late in the season. Until now, the injury existed outside the program only in rumors, having gone unrevealed publicly by Daniel or Tigers Coach Gary Pinkel.

Why is Oklahoma State losing some coaches to other programs? Money is one reason.

OSU was at the forefront of boosting assistants’ salaries a few years back, but those figures have been left in the dust behind the money that is suddenly being tossed around in the SEC.

What did the bowl season do to the Big 12's reputation?

No division in college football matched the entertainment value of the South. Each week offered must-see TV. But three losses and Texas' sloppy performance will provoke a long, critical look.

Oklahoma should've put to rest the notion that the league is too soft or too slow to beat SEC teams like Florida.

CBSSports has the All-Bowl Team. Several Big 12 players made the cut.

Barking Carnival has the BCS TV ratings. The Texas-Ohio State game viewership was up 35%.

The New York Times looks at basketball tenure for head coaches. The Big 12 ranks at the bottom.

The Sports Economist looks at bowl history and why the marquee bowl games no longer all play on New Year's Day.

In an unholy alliance, Bring On The Cats and Rock M Nation have found that Kansas has added a new major: Bachelor of Arts in Being an Annoying Fan.

Corn Nation has the Cob of the Week. Our own Colt McCoy is one of the choices for Cob.

Colt McCoy - After you salvaged a victory in a Fiesta Bowl game you did your darndest to choke all game long, you need to apologize for playing so poorly, not brag about how you are somehow unbeatable.  Especially when that choke job was against a mediocre Ohio State team that had no business being in a BCS bowl game in the first place.

Crimson and Cream Machine has some fun with their victory over the Horns last night.