Following in the footsteps of highly-touted defensive end Eddie Jones, Dominique Jones also hails from Kilgore High School. Besides Jones, Kilgore has a strong presence in Austin, with Michael Huey and Britt Mitchel also Kilgore alums. While Jones isn't as highly regarded as some of his former and once again teammates, he does have good explosiveness for his position ($) and accompanying change-of-direction skills, while also demonstrating the ability to stay low and use his leverage to bullrush offensive tackles in passing situations, drawing favorable comparisons to Eddie Jones. When Dominique does manage to stand up his blockers, besides leverage, he does so by using his hands well, indicating that he is not completely unschooled in technique. 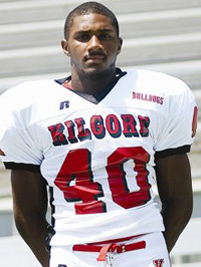 Jones was not recruited by the same caliber of schools even as Kyle Kriegel, drawing interest from TCU, Oklahoma State, and Texas A&M, deciding to commit just hours ($) after receiving his offer from Texas. Mack Brown also emphasizes recruiting players who grew up as Texas fans and Jones fills that criteria, stating after his commitment that he always wanted to go to Texas. Jones wasn't without accolades in high school, earning district Defensive Lineman of the Year while recording 75 tackles, nine tackles for loss, and five sacks during his junior year. Certainly not the gaudy statistics on display from Kyle Kriegel, but Jones plays at a much more competitive level at Kilgore. In addition to the Lineman of the Year Award, Jones just received the Defensive Player of the Year award for his district after the Bulldogs won their second straight district championship after recording 64 tackles, 10 tackles for loss, and three sacks, numbers that were somewhat down from his junior year due to consistent double teams. Besides the double teams, Jones' numbers were impacted by a shoulder injury ($) sustained before the first game that also required surgery after the season.

Despite being a physical player at the line of scrimmage, Jones does not always display proper technique, with a bad habit of lowering his head, causing him to lose track of the play at times. And, of course, the staple of every review of high school defensive ends (and even some college ends), is his inconsistent use of his hands. Jones also struggles to keep his shoulders square, turning them and allowing himself to be blocked too easily. Once again, and this is becoming redundant, Jones needs to refine his technique at the college level to break into the Texas depth chart. Maybe I should develop an acronym for refining technique. Sheesh.

Like Kriegel, Jones possesses a frame capable of adding a significant amount of weight, critical since Jones, once again like Kriegel, only bench presses 300 pounds coming out of high school. Unlike Kriegel, however, there has been no talk of spinning him down to defensive tackle, perhaps suggesting that Jones doesn't have as much room on his frame to add weight or just has better raw speed.

While Jones wasn't highly recruited early in the process, he drew the attention of a variety of schools after committing to Texas, drawing interest ($) from Illinois, Nebraska, Texas Tech, Arkansas, Baylor, and Stanford, among others. True to his word and his long-time Longhorn fandom, Jones rebuffed the advances from other schools and remained committed to Texas.

It's hard to evaluate the differences between Jones and Kriegel, since both are around the same height and weight and possess about the same speed. Jones seems a little more capable of taking on blockers and is more physical, which may indicate that he could compete for time in the defensive end rotation before Kriegel, although both need to add strength. Like Kriegel, Jones will likely redshirt and begin to compete for playing time when Sam Acho and Eddie Jones graduate after the 2010 season. Although helping his cause for early playing time by enrolling in the spring semester, Jones may not be able to participate in spring practice because of his shoulder surgery, which will certainly set back his development on the field and in the weight room.