A true dual threat at tight end, Graham possesses excellent speed for his position, evidenced by his 4.6 40s, as well as significant athleticism with a 36-inch vertical, signs of his wide receiver past and pedigree. Two skills that will serve Graham well in the Texas offense stand out: 1) his speed can stretch the field vertically and 2) he runs good routes ($) and has the ability to exploit zone coverage by finding and settling into coverage holes. An excellent student with a GPA of 98.5 on a 100 scale and future business and pre-med major, Graham displays the concentration level to adjust to poorly thrown balls. 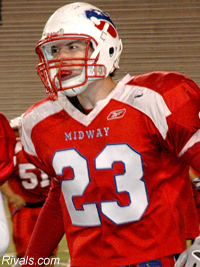 While known as a pass catcher, Graham added 15 pounds of muscle between his junior and senior seasons to wed strength to his high energy level when run blocking. Attributing those frame gains to work outs with the offensive lineman ($) in the weight room and competing with the lineman flipping tires and pushing trucks, Graham already works hard at maximizing his ability, even lifting at home in his father's own weight room ($). His frame may allow more bulk, but Graham already plays at the same weight Texas coaches want DJ Grant to play at next season, though Graham stands two inches taller and may still need to get stronger. A likely goal for entering his freshman season at UT is probably between 240 and 250 pounds, with his high school coach Kent Bachtel saying he could even eventually reach 260 ($), a weight at which Graham could lose speed. 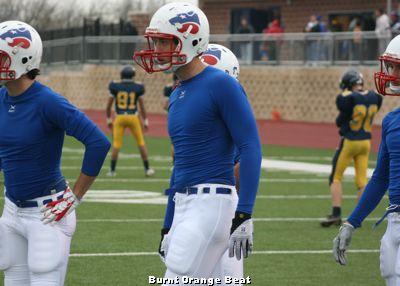 As a blocker, Graham moves his feet well and gets into the second level consistently, crediting those gains since his sophomore year to hard work and evaluating his technique on film. Graham improved as well during his senior season while clearing the way for running back John Hubert, a Darren Sproles clone who may head to Kansas State. Notice a pattern here with Graham? Yeah, kid works hard. He also places his hands well and locks onto the defender, meaning I don't have to talk about how he needs to substantially improve his technique at the collegiate level. Sweet!

While Graham has the ability to catch the ball away from his body, he falls into the bad habit of letting the ball get into his body before making the catch. In his high school offense at Midway, he wasn't asked to run many vertical routes despite his excellent speed, so he could have an adjustment period to the role Texas coaches prefer for their tight ends, which is doing exactly that.

In terms of blocking, Graham needs to get better knee bend to gain better leverage to drive defenders off the line of scrimmage. Besides knee bend, the other issue plaguing his blocking is directly related to his knee bend, as Graham's pad level remains too upright, negating his leverage.

A serious commitment to the weight room and honest critique of his blocking shortcomings allay any fears that Trey Graham is a one-dimensional tight end. With his background as a receiver and his precise route-running attesting to that experience, Graham's receiving credentials remain beyond reproach. The numbers weren't gaudy as a senior, with 18 catches for 240 yards and four touchdowns ($), but Graham isn't the Waco Midway team, he plays a role on an excellent Midway team that lost to Longview in the playoffs, the eventual state runners-up, yet still played well enough individually to earn first team All-District honors for a second straight year. In fact, Midway was flat-out loaded with talent ($) across classes. Several to keep an eye on: 2010 stud safety Ahmad Dixon, 2011 prospects linebacker Marc Martinez and Beau Blackshear (offer the kid just for his name, I say), and 2012 safety, 6-3 freshman Shakiel Randolph, already with playoff experience.

All that is to say that numbers don't tell the whole story for Graham, because his obvious work ethic and winning experience make him a more valuable prospect than his Rivals ranking suggests alone, though Austin-based recruiting analyst Randy Rodgers calls him the best tight end in Texas. When setting expectations appropriately, those intangibles make it more likely that Graham will eventually succeed at Texas. Considering what Texas ran out on the field last season after Blaine Irby's injury Graham could well have contributed this season, likely even as a true freshman.

His prospects for playing early next season appear more remote, but that depends significantly on the development of DJ Grant, Josh Marshall and Ian Harris and how the competition between Graham and fellow incoming freshman Barrett Matthews plays out. To handicap that competition, playing time will obviously depend on providing the best combination of blocking and receiving. The former receivers, Grant and Marshall, may be behind in that aspect, while Harris and Matthews may not run routes with the same quality as the former receivers or Graham, though Matthews certainly possesses speed to rival and surpass even the fast Graham.