Share All sharing options for: Bevo's Daily Round Up 1.14.09

Colt McCoy has been selected as the winner of the 2008 Archie Griffin Award.

Ditto that sentiment. Mack Brown is excited that Lamarr Houston, Sergio Kindle and Roddrick Muckelroy are returning next season.

"We're really excited that Lamarr, Sergio and Roddrick have decided to come back for their senior season," UT coach Mack Brown said. "They are terrific kids who are on schedule to earn their degrees and can be great leaders for our team.

The Longhorns, after reaching a high of No. 4 in The Associated Press poll a month ago, have plummeted to 16th. Coming into tonight's game against Colorado, they have lost three of their past four games, including last Saturday's Big 12 Conference opener at Texas Tech.

Texas started this season by raising expectations with 11 straight victories, including three over ranked teams. Since late December, however, the Longhorns have dropped three of four, with the three losses coming to unranked teams.

"We've dropped like a rock in the polls," Goestenkors said. "Maybe that's not a bad thing for us."

40acressports looks at the Oklahoma loss and comes up with a conclusion: Guard play, or lack thereof.

UT is No. 8 on the preseason National Collegiate Baseball Writers Association poll. Texas A&M came in at No. 4 in the poll. 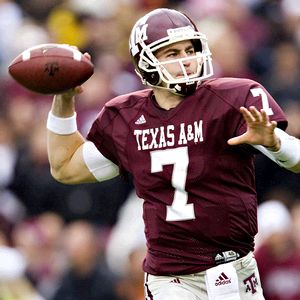 Congratulations to Stephen McGee. McGee has been awarded the 2008 Fellowship of Christian Athletes Bobby Bowden Athlete of the Year.

Nelson Peterson could offer plenty of advice to Bradford's parents. After three seasons at OU, Adrian Peterson was the No. 7 pick in the 2007 draft. He was rookie of the year last season, and this fall earned All-Pro honors while leading the NFL in rushing. He signed a five-year, $40.5 million deal, with $17 million up front. He also has many endorsements that make him one of his sport's highest-paid figures.

Bradford has made up his mind, but isn't talking just yet.

According to Dave Sittler's blog, OU quarterback coach Josh Heupel is not leaving for Minnesota.

84th Annual East-West Shrine Game will be played in Houston on Saturday. Several Big 12 players are on both rosters. The Houston Chronicle has some practice notes.

* Texas DT Roy Miller looked very quick off the snap and played with a low pad level and with good leverage in one on one drills.

* Javorskie Lane from Texas A&M weighed in at a whopping 295 which is too bad because the FB had two terrific one handed catches that showed off his underrated hands. Lane's weight is a huge turnoff to scouts in attendance who have all but written him off as a draftable prospect.

ESPN's Tim Griffin looks back at the Big 12 bowl scene and makes some obervations. What was most surprising?

The most surprising trend was the lift that the Big 12 received from the North Division, which went 3-0 in the bowls after struggling to a 3-15 record against the South in the regular season.

So easy a kid could do it. Texas Tech basketball coach Pat Knight was tired of players missing shots that even a child could make. So he went and found one to make his point.

Kansas guard Mario Little is going to play this season instead of applying for a medical hardship. Little missed the first 12 games this season with injuries.

The No. 6 Sooners are not happy with the lack of respect.

The sixth-ranked Sooners want everyone to know that they’re for real, starting with third-year coach Jeff Capel.

Capel griped about the lack of respect shown his team after the Sooners’ impressive 78-63 victory against No. 11 Texas on Monday night, taking offense to a question about Oklahoma’s short bench that produced only three points against the Longhorns.

"Everyone wants to make a big deal about the bench and starters playing X amount of minutes. We’re trying to win games, and our starters can play 40 minutes a game," Capel said. "You know, I wonder if Texas gets that, because (A.J.) Abrams plays 40 minutes a game every time.

Big Monday on ESPN is a great publicity and recruiting tool for the Big 12.

The Big 12 and Big Monday renewed their partnership last night, tipping off a season of prime-time exposure with the renewal of the Texas and Oklahoma series, one that has provided more than a few highlight moments in the conference’s 12 seasons.

The partnership has been mutually beneficial, sending conference games into an estimated 82-85 million homes and the league has responded for the most part with quality, entertaining games.

Now Colorado is in on the act. Colorado State Sen. Shawn Mitchell drafted a resolution urging Colorado's universities to push for a playoff in college football and UC Regent Tom Lucero plans to introduce a resolution to encourage the NCAA to adopt a playoff instead of the Bowl Championship Series.

The American Football Coaches Association is holding its annual convention. Care to guess what is on the agenda? Did they come up with any solutions?

Are big changes coming to the main entity that legitimizes the BCS?

The Division I-A head coaches voted Tuesday to continue awarding its national championship trophy to the winner of the BCS title game for at least one more season. The coaches voted "unanimously" at a Tuesday morning meeting during the American Football Coaches Association national convention here at the Opryland Hotel.

However, by one estimate, only 60 to 70 of the 120 I-A coaches were in the room. Three of the four coaches of teams generally regarded to have a national title claim in 2008 apparently were in attendance -- Florida's Urban Meyer, Texas' Mack Brown and Utah's Kyle Whittingham. USC coach Pete Carroll did not attend.