Matthews' coach David Aymond describes the tight end prospect as a hard-nosed blocker ($), but a talented enough wide receiver to split out wide. Galena Park North Shore counts Cory Redding and Chykie Brown as alumnus, but also includes among those ranks two current Division I tight ends ($), Miami's Dajleon Farr and Arizona's Earl Mitchell, with two others before them. Coincidence perhaps, but a third consecutive Division I tight end suggests that Aymond and his catching staff, along with the S&C staff, are during a good coaching job. And of all of those tight ends, some consider Matthews the best blocker and most athletic. 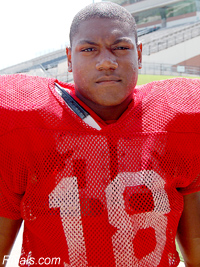 As evidence of the coaching he receives, Matthews blocks with a combination of ferocity and technique. Like Graham, once Matthews gets his hands on a defender, he finishes the block using hand placement and leverage ($) generated from his pad level and lower body. Most observers credit Matthews with the type of tenacity and nasty streak needed to block at a high level in college. His strength helps, as Matthews benches ($) 325 pounds and squats 415 pounds.

Physicality in the blocking game extends to the passing game for Matthews, as he uses his body to shield defenders, as well as battle for position. His powers of concentration and physicality keep him calm tracking the ball and making catches in traffic, which he does consistently away from his body and with good hands. After the catch, Matthews uses his exceptional acceleration for a tight end, finishing runs with his characteristic physicality. That acceleration translates into good in-line speed and change of direction, making Matthews a difficult match up for opposing linebackers and fast enough to compete for his school's track team in the 100 and 200m events. 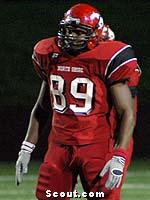 Matthews doesn't run routes with the same polish as Graham, owing to the latter's experience as a wide receiver. In addition, the North Shore offense didn't throw the ball a lot to Matthews, meaning that his in-game reps and experience falls short of the Midway star. After a junior season in which he caught 18 balls for 316 yards and seven touchdowns ($), Matthews had 14 catches for 239 and four touchdowns ($). Despite the lack of touches, Mathews still earned Offensive Co-MVP ($) of his district.

Showing an acute awareness for his own faults, Matthews critiques his own game:

I think I need to get better in route running. On play action, knowing when to break off my route is one thing. Knowing when the quarterback is in trouble and coming back to the ball is another.

The ability to understand his own faults and work to improve them will help Matthews tremendously when he dons burnt orange, but Matthews clearly has some work to do refining his route-running skills, though that is his only major weakness.

Perhaps given his invitation to the Under Armour All-American game, more buzz seems to surround Matthews than Trey Graham, even though Graham projects as more of a pure tight end and Matthews more of an H-back due to his height. When Greg Davis sits down this spring to devise ways to improve the running game, using an H-back may enter the consideration, a position Blaine Irby played his freshman year after all the fullbacks suffered injuries. It's entirely conceivable, though somewhat far-fetched, to conceive of a Texas offense in which Matthews and Graham both receive playing time next year, with Matthews in the H-back role and Graham getting reps at tight end. Like some of the less highly-rated members of the recruiting class, their first chance to get on the field may be special teams.

A close consideration of the skill sets of Graham and Matthews reveals two players who do some of the same things well, but in slightly different ways. Matthews is perhaps the better blocker at the moment because of his leverage and slightly better technique. Graham is the more polished receiver, while Matthews catches the ball away from his body a little bit better, with both players capable of quick acceleration, stretching the field down the seam, and finding holes in zone coverage.

That talent has attracted enough attention for programs like Oklahoma State, Alabama, and Florida to inquire about his services, even after his commitment to Texas. Matthews says he hasn't answered those phone calls or opened the mail from those programs, staying true to his word to Texas.