Share All sharing options for: Bevo's Daily Round Up 1.15.09

So everyone has just figured this out? ESPN's Tim Griffin puts out his final Big 12 rankings after the bowl season. Guess who comes in at No. 1?

Someone thinks Texans are upset about this? The OU-BYU game will be the grand-opening of Jerry Jones 1.3 billion dollar stadium facility in Arlington.

The sinking economy is effecting everyone. That also includes football recruits.

To enable their parents to watch games in person and to reduce travel costs to and from campus, athletes may decide to stay closer to home, said Tom Lemming, a national football recruiting analyst. 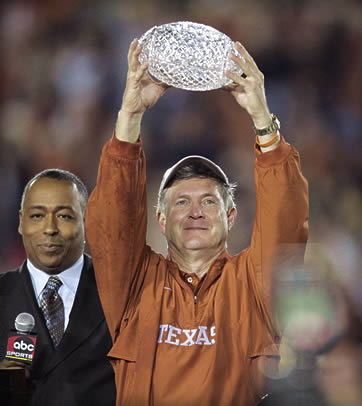 If the dream is big enough the facts don't matter. ~ Dexter Yager. Rocky Mountain News' writer Dave Krieger has a dream. College football has a playoff and it comes down to UCS and Texas.

The Horns were hoping to beef up the non-conference schedule, but it didn't work out.

At the behest of ESPN, Texas had agreed to shift its game against Central Florida, set for Sept. 19, to a future year and substitute Wisconsin onto this year's schedule, but the schools couldn't arrange a return date to Madison, Wis., until 2013 and the proposal died.

"Every year ESPN throws out potential games to play in its September window," said Butch Worley, Texas' senior associate athletic director who handles the football scheduling. "They threw out several options. Some of them were attractive; some of them were not so. None of them materialized. Wisconsin was one of the names on the list."

In case you are going through football withdrawal, spring practice starts February 27.

The Longhorns will return to the practice fields on Feb. 27. Their spring scrimmage is set for Sunday, April 5

Not as if we are keeping track... The season starts in 232 days. If you need a fix, head over to Hulu.com to watch the Fiesta Bowl.

The Texas-Texas Tech game will be televised.

Despite a poor showing against OU on Monday night, the Horns are still considered an early conference favorite.

If Oklahoma’s the favorite to win the Big 12, Texas isn't far behind, despite its poor outing Monday night. The season’s still young and Texas returns a slew of starters from last year’s team that reached the Elite 8. It can also be argued that the Longhorns had the Big 12's toughest non-conference schedule, with games against four ranked opponents (No. 8 Notre Dame, No. 12 UCLA, No. 15 Villanova, No. 19 Michigan State). Texas went 2-2 against the ranked teams.

Sam Bradford will return for his junior year at OU. During the press conference Bob Stoops compared Sam Bradford to a car.

Sam Bradford is staying for one big reason: He likes the University of Oklahoma.

In announcing his decision Wednesday, Bradford said: "I've dreamed about playing at Oklahoma since I was little. My three years here have been three of the best years of my life. There's no need to cut this experience short."

CBSSports' Dennis Dodd is happy about Bradford's decision. Next season will be a sportswriter's dream.

It means the Big 12 better get its act together on that tiebreaker because considering the strength (again) of its South Division, we could have the same ugly mess on our hands. And it would be great.

ESPN's Tim Griffin lists the most memorable moments of the 2008 season.

45-35 and beyond: Texas whipped Oklahoma on Oct. 11, but the numbers didn't add up as Sooners eventually claimed a Big 12 title berth thanks to a strong finish and a favorable computer ranking. At several late-season games, airplane flyovers reminded fans about the Oct. 11 contest ad nauseam. It only makes the 2009 Texas-Oklahoma game already the most anticipated in Big 12 history.

Absent the odd loss at Colorado, Oklahoma has become less like Florida and more like Texas, no longer winning every big game but no longer losing head-scratchers, either. Obviously, this theory, like all theories of human behavior, is imperfect and has exceptions, but the answer seems clear: Bob Stoops is no longer "Big Game Bob" because he is no longer the volatile driven coach who never blinked against major opponents yet often lost his edge against inferior opponents. Now he is a C.E.O.-style skipper who wins every game he’s expected to win but sometimes stumbles in the tougher tussles.

So how has "Big Game Bob" lost five straight major bowl games? Why, the same way Vince Dooley lost four Sugar Bowls, and the same way Tom Osborne lost seven straight bowl games between 1987 and 1993, and the same way Bear Bryant went 0-7-1 in postseason play from 1967 to 1974 . . . by getting there in the first place.

More on the Sooners' feelings of inadequacy.

What OU wants to know is why it took a victory over Texas to enter the discussion?

There was little doubt OU used lack of respect as a motivational tool. Every team goes to that reservoir at some point during the season. The Sooners clearly found some extra energy from the fountain of the slighted.

The 40/25-second clock has little impact on the bowl season. So why were games longer this year? Commercials.

For those newbies, here it is in a nutshell: There's nothing wrong with the game. The problem is the increased commercialization. Cut the commercials and you'll see the length of games reduced dramatically.

We know that's not going to happen, but there has to be a happy medium. One prediction we will make: If the rules stay as they are, expect the time of games to begin to climb again toward the 2007 level as networks cram more and more commercials into telecasts.

"I really feel that you can't leave it as is," Towns said. "Right now, if you ask what the No. 1 team is, a lot of people would say USC. Others would say Texas and if you ask anybody in the state of Utah, they would say their team was the best. I want to get a system that has credibility."

Towns said there's no timetable set, and no letters to appear have been sent out. He's hoping to get cooperation from those involved in the Football Bowl Subdivision but would use subpoena authority if needed.

Academic issues are on the front-burner at the NCAA annual convention.

Coaches who support the early signing period contend their staffs waste time and money playing defense with committed players getting bombarded by other schools. The coaches who oppose the plan -- and they have dwindled in the past two or three years -- believe they already have too little opportunity to build a relationship with players before offering a scholarship. An early signing period, they argue, would only further accelerate the process.

A new bowl game to benefit breast cancer research: Bowl for a Cure.