The main thing that jumps out about Eryon Barnett is his size. Deon Beasley's struggles this season, particularly in the aspect of physicality, illustrate the disadvantage that smaller cornerbacks experience. With big receivers in the Big 12 like the recently-departed Michael Crabtree and several others with eligibility remaining, like Dez Bryant and Dezmon Briscoe, cornerbacks without the size to match up physically will be picked on. Curtis Brown's inability to get to the ball or slow down Crabtree on the final play against Tech is another example further reinforces the point. 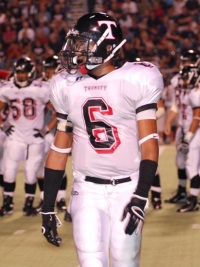 Duane Akina has long preferred versatile defensive backs who are equally capable of playing the deep safety position and walking up to the line of scrimmage to defend the slot position. At 6-3, with a long, rangy body and long arms as well, Barnett typifies the athlete that Akina covets. With the range of a safety and the fluidity of a cornerback ($) out of his back pedal, Barnett could play either position as needed for the Longhorns.

Barnett's size allows him to play physically at the line of scrimmage, not allowing opposing receivers to get cleanly into their routes. That physicality translates into tackling as well, as Barnett breaks down well in the open field and tackles with the same excellent form that Longhorn fans came to love from Aaron Williams as a true freshman. How physical is Barnett? Physical enough for Rivals to call him the second most physical cornerback ($) in the entire class.

Unlike the current set of Longhorn defensive back, Barnett actually shows some ball skills, adjusting to the ball before high pointing it and leaping well, evidenced by his 36-inch vertical. Instinctive play helps Barnett read and react to underneath routes, allowing him to play the ball or punish receivers over the middle.

Also unlike current Longhorn defensive backs, Barnett has the ability to play zone coverage with a deep understanding of the zone schemes. Considering his ability to recover and close on wide receivers, which isn't his greatest strength, Barnett could project as a strong zone coverage cornerback. Of course, that would mean that the coaches would have to find some way to teach zone techniques to the other defensive backs, not exactly an area of strength for this staff.

While Barnett displays a variety of the skills that make up good cornerbacks, he sometimes has trouble turning and running with receivers after jamming them, certainly a major problem, as Scott Derry would tell you after trying to jam Jermaine Gresham in the Cotton Bowl in 2007 and barely being able to turn before Gresham was in the end zone with the ball. For the fastest of cornerbacks, that may not be as big of a problem, but Barnett doesn't have elite closing speed. He also defends better when the play is in front of him, suggesting that safety may be the best position for him. His large frame for a defensive back also means that he could grow into the safety position.

Barnett's exceptional size for a cornerback makes him a valuable commodity at that position, but he will need some time before he becomes a good man-to-man defender at cornerback. He was, however, playing exceptionally at cornerback in the beginning of his senior season, intercepting four passes in the first five games, one more than the three interceptions he recorded as a junior, along with the 46 tackles he made and six passes he broke up.

The exceptional season wasn't meant to continue, as a knee injury that he suffered in October ($) ended his season, when he tore his ACL and split his meniscus. All reports indicate that Barnettt is recovering quickly from his surgery, but the timing of his injury probably necessitates a redshirt year to regain full strength and start adding the muscle that his frame can support. All that being considered, a move to safety seems the most likely end result of the process, the position at which Scout lists him.