Share All sharing options for: Basketball Thoughts From Norman...

...as you might have noticed, the title of this post represents thoughts from my trip itself, rather than the game.  There is currently a diary discussion following the game here, which includes a rather strong rant from whills, who refers to the players as "two bit fartknockers."

While the game was on Monday night, I've spent the past two days feeling awful, a potential aftereffect for spending over 7 hours in the state of Oklahoma.  Since my trip was merely an up-and-back, I dont have any "Senator" stories like 54b always provides.  I also dont have any lengthy On The Road notes like Horn Brain.  But, after the jump, I do have some observations over the OU Arena, pre-game displays, etc, that I thought were worth sharing.

First off, I got my tickets through Ryan Clarke, whose journeys are chronicled at his website Longhorn Road Trip.  In attending over NINETY consecutive UT basketball games, Ryan definitely has set a high bar over fanhood, especially since he began his streak as a UT Student.

While not as extensive as the Drum, there were several aspects about the LNC that I drew my interest...

1) Parking: When we arrived at the campus, we found the LNC surrounded by an expansive parking lot.  Even better, this parking lot didn't require an OU parking pass or paying ten dollars to a parking attendant.  We were able to park within a two-minute walk of the arena without charge.  Anyone who has had to make the trek from the various UT Parking lots definitely appreciates accessible and/or free lots.  While I'm happy that UT still allows my "C Lot" pass to function during basketball games, I do wish there was a better solution than walking further or paying ten bucks for regular ticket-holders.

2) No Upper Level: While the Drum has the Mezzanine Level, the LNC contains a single bowl of seats.  Even though our seats were on the second-highest row in the arena, we still had excellent seats.  Even though it only contains 11,000+ seats, the LNC provides a cozy environment for the fans.

3) Restricted Student Seating: While I know firsthand the limited O-Zone crowds for the non-UCLA home games this year, I expected a better turnout by the OU Students.  In addition to the game occurring over Winter Break, part of this mediocre turnout might be explained by their student seating arrangements.  Student seating was only on one end of the arena, with only a few students close to the floor.  Other than that, the student seating was restricted to regular seats behind the same basket.

4) Traditions, Heritage, and "Branding": Perhaps the most impressive portion of the LNC was the endless display cases, photographs, posters, and shrines over OU Basketball.  Outside the arena, there were two massive OU schedule posters prominently featuring Courtney Paris and Blake Griffin.  In walking around the arena, visitors are treated to many different tributes to specific OU players and teams.  There was also a giant OU logo that was lit up and could be seen from across the parking lot.  UT has similar displays within Cooley Pavillion and Belmont Hall, which are largely inaccessible to fans and visitors.

Going a step further, OU has also built a museum exhibit within the LNC to honor their basketball tradition.  Called the Legacy Court, it includes a 100-year timeline over OU basketball, a "Legends Wall", nets and trophies, and all sorts of TVs and interactive displays.  Even as a diehard Longhorns fan, it was pretty impressive.  I really, really, really wish we had something similar within the Erwin Center...

1) Pre-Game Video Packages: Prior to coming out on the court, the OU players are shown in a huddle, then they jogged out to the court together to the fight song.  I think the UT Video Package--modeled after the football game package on Godzillatron--is superior.  However, I thought y'all should know that Jeff Capel walked out separately from the team, with his entrance also being shown on the video board to a rousing cheer.  It looked even more egotistical than it sounds...

While the warm-up package was weak, I thought the OU player introduction video package was really bad-ass.  The music was "Let it Rock" by Kevin Rudolf and had the basket catch on fire "NBA Jam" style during highlights of some vicious dunks, blocks, and long-bombs.  These graphics fit perfectly with the music and got the crowd pumped up.  The highlight package culminated with Blake Griffin screaming into the camera after dunking in a defender's face.  It was far superior to the current UT Package, which recycles "Lets Get it Started" by the Black Eyed Peas and includes a rather vanilla string of highlights.

2) Player "Commercials" for Cheering: When UT closed the game to 54-50, the OU Video Board unleashed a particularly effective package of movie and player clips.  Prior to the player clips, a scene from "Hoosiers" was shown.  Following this scene, invididual players--in pretaped commercials--encouraged the fans to make some noise, with each successive player getting louder and being more aggressive with their mannerisms.  It was pretty effective, as the crowd got on its feet prior to the next possession.

1) Treatment by Fans:  We were treated pretty hospitably by the OU fans.  A few "Texas Sucks" chants were nullified by responding with the Gator Chomp, which was highly entertaining and incredibly effective.  I cannot give a higher recommendation over using the Gator Chomp in the upcoming months towards obnoxious OU fans.

2) Blake Griffin's Mannerisms: I don't think Rick Barnes and Blake Griffin would get along very well.  Blake's "Who Me?" or menacing glare to the officials after any call or non-call would not go over very well with Rick Barnes.  Our entire group knew Chapman was getting pulled after making gestures protesting his innocence after a foul call.  In watching Blake Griffin, he is an absolute d-bag when it comes to the officials...not that you guys didnt know this, but it was even more apparent in person.

3) Rick Barnes' Vocal Prowess: Speaking of Rick Barnes, I can confirm that Rick Barnes' voice could be heard from the 2nd highest row in the entire arena.  I think this is pretty awesome... 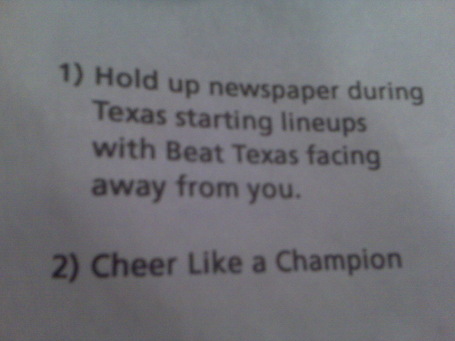 Yeah, I thought it was pretty dumb, too...

Overall, I found the Lloyd Noble Center to be an impressive basketball arena, despite its smaller size.  The various displays, exhibits, and video packages were well-conceived and added a context to the arena and game experience that don't currently exist down at Texas.  The arena was also easily accessible and had the OU logo plastered all over the place.

While it sickened me to watch the 'Horns take a beating from the hated Sooners, I definitely wouldn't be disappointed if UT Athletics and the Basketball Program adopted some of the ideas and programs being used by our less affluent neighbors to the North.  I just hope they never tell us to "Cheer Like a Champion", which would be about as bad as when they tried to get everyone to wear Straw Hats in the O-Zone...