Share All sharing options for: Bevo's Daily Round Up 1.16.09

The 2009 Heisman Race could be the best ever.

This is star power to the nth degree. This will be a year when all three—Colt McCoy, Tim Tebow and Sam Bradford —will likely be trying to one-up the other with their play, but only in an attempt to lead their respective teams to the national title. Ah yes, the national title hunt.

Mack Brown explains why he did not vote Texas No. 1.

Brown vowed to vote his Longhorns first after their 24-21 win over Ohio State in the Fiesta Bowl, but when the poll came out, Texas didn't have a first-place vote.

"I read something that said your vote didn't count if you voted for No. 1 because No. 1 already was taken," Brown said Thursday.

Brown spoke before an event to honor him as one of eight finalists for the Paul "Bear" Bryant college coach of the year award.

"I didn't want to hurt our team by voting us No. 1 and it not counting," Brown said. "So I guess I misunderstood."

Prepticket.com lists the Top 25 College Coaches. Mack Brown is No. 4 right behind our favorite coach on the other side of the Red River.

Longhorns eligible for the draft faced a tough decision.

Going pro gives the athletes visions of dollar signs dancing in their heads.

Sergio Kindle admitted it when he said he was coming back. "If I would have left this year, I would have made a lot of money. But next year, I can break the bank."

That's a great choice for the Longhorns... and probably for Kindle. The same is true for Colt McCoy. And for other players coming back.

Should Colt McCoy change his mind? No, because he could end up like Matt Leinart.

If you're having the time of your life in college, hold onto it as long as you can. Nothing guarantees a charmed existence on the other side. 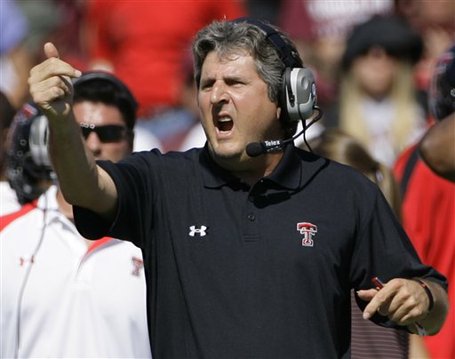 Mike Leach still hasn't signed a contract extension with the Red Raiders despite months of negotiations.

Leach, who has two years left on his current contract, said Thursday the talks are ongoing.

"They're still working on it," he said. "Just trying to make it competitive within the conference."

Texas Tech wide receiver Todd Walker is giving up football to to graduate early and go to dental school. Walker has one year of eligibility remaining.

The lead sentence of the AP version does not accurately reflect what I reported in the Tribune. The 126-word AP account begins with this sentence:

Missouri quarterback Chase Daniel says a previously undisclosed thumb injury on his throwing hand was partly to blame for his late-season struggles.

Not once during his interview with me did Daniel say his thumb injury was partly or in any way to blame for his late-season struggles. In fact, Daniel repeatedly said he was not blaming the injury for poor throws.

"I played through it," he said. "Honestly, it’s not that big of a deal. I don’t blame" the injury "on me throwing interceptions. It was just poor decision-making." 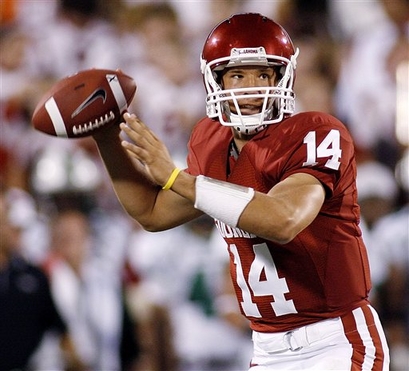 Norman is a very happy place. Sam Bradford is livin' the dream and will return, but does it surprise anyone that the OK sportswriters are taking some shots at Tim Tebow?

Just because Bradford goes about his business in a far more composed manner doesn’t mean he cares any less about winning than Tebow, or that he is any less of a leader than Tebow.

Cheers and Jeers from Barry Tramel, one of Oklahoma's favorite sportswriters.

To no more BCS title games on FOX. ABC has the title game next season, ESPN thereafter. FOX never really was in the college football business until January, and it showed.

To OU sportsmanship in the Big Bowl. From Nic Harris pulling on Percy Harvin’s ankle to Juaquin Iglesias’ late meltdown in a ref’s face, the Soonersdidn’t finish with poise.

Tramel mulls over the Sooners' bowl chances in 2009.

Bob Stoops is a happy man. Bradford's return in bigger than signing day. Maybe it will make up for the fact that one of his committed recruits bolted for Lubbock.

Missouri beat Colorado 107-62. The Buffs coach summed it up:

"What you take away from this game is a red face and a red behind," CU coach Jeff Bzdelik said. "Because you got your butt whupped."

Big 12 Sports has decided that size does matter.

Nebraska coach Doc Sadler and Oklahoma State first-year coach Travis Ford are resigned to the fact that the rest of their seasons will be spent defending the basketball equivalent of the Alamo.

"Heart. Playing hard," guard Sek Henry said of the Cornhuskers' playing style. "That's how I see it. We know teams are going to be bigger than us. But last year's Big 12 was a whole lot bigger than this year's. Teams have size, but it's not like last year.

"We just play hard, play smart, I think we'll be all right."

Here are the Big 12 plays of the week.

Giving in to recruiters looking for the next Michael Jordan, the NCAA has given in and now seventh-graders are officially prospects.

The organization voted Thursday to change the definition of a prospect from ninth grade to seventh grade -- for men's basketball only -- to nip a trend in which some college coaches were working at private, elite camps and clinics for seventh- and eighth-graders. The NCAA couldn't regulate those camps because those youngsters fell below the current cutoff.

"It's a little scary only because -- we talked about this -- where does it stop?" said Joe D'Antonio, chairman of the 31-member Division I Legislative Council, which approved the change during a two-day meeting at the NCAA Convention. "The fact that we've got to this point is really just a sign of the times."

Schools had expressed concern that the younger-age elite camps whether giving participating coaches a recruiting advantage, pressuring other coaches to start their own camps.

ESPN's Bruce Feldman goes behind the scenes of recruiting at the University of Tennesse. This is a great look at what really goes on in the hunt for 17 and 18 year-old raw talent.

SI's Stewart Mandel thinks a longer timetable for college players to declare for the NFL draft would help their decision making process.

Football players face a substantially tighter timetable than their basketball counterparts when it comes to deciding whether to turn pro. The Final Four is usually held the first weekend of April, and the deadline to declare for the draft doesn't come until May 1. Even then, if a player does not sign with an agent, he can work out for NBA teams (at his own expense) and, if it turns out his stock isn't as high as he thought it might be, can opt out of the draft as late as 10 days before the event.

NFL spokesman Greg Aiello said the Jan. 15 deadline, which has been in place for years, was set because it's "after the bowl games and before the [mid-February] combine." Teams need time to research them prior to the combine.

However, the college regular season has since been extended by a week (in some cases, two weeks), and bowl games are now played as late as a week after New Year's Day. Might it be time to consider pushing back the deadline?