In one word -- speed. Even off the football field his speed is exceptional, as he helped lead Rowlett to a state title last season ($) in track, finishing in first place as a member of the 4x100 relay team and in the long jump (a mark that would have won the Big 12 ($) in 2008) and triple jump, second in the state with a 10.38 100m, and third as a member of the 4x200 relay team. Just how impressive were those feats? Impressive enough to earn him the 2007-08 Gatorade Track and Field Athlete of the Year. Beyond state-level competition, it's not a stretch to call Goodwin a world-class athlete, attested to by his first-place finish in the long jump at the IAAF World Junior Championships in Poland last summer. 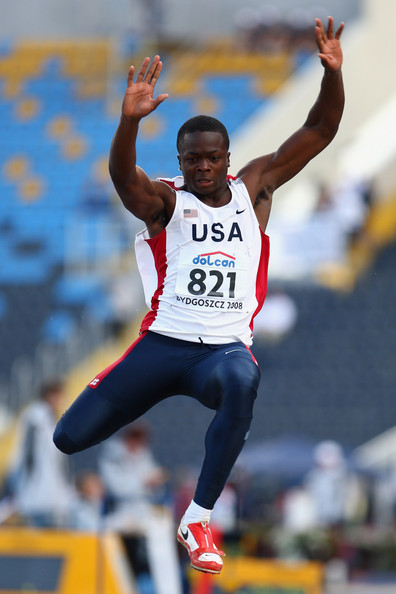 Considering Goodwin's success in track and field, which is significant, it's easy to peg him as simply a runner playing football. To do so would be to sell Goodwin far too short as a football player who caught 44 passes for 651 yards and seven touchdowns as a senior, numbers that were down from his junior year because Rowlett lost their starting quarterback to injury ($) before the season. A player who drew interest from the likes of Nebraska, Oregon, Kansas, Washington, Oklahoma, Arizona, Baylor, Texas Tech, and Texas A&M, Goodwin is an exceptional route runner, owing not only to his explosiveness, which is significant, but also to his fluidity and an effortless ability to come into and out of cuts. As necessary for a track star, Goodwin accelerates quickly and reaches top speed in few strides. Like other track stars Percy Harvin and Trindon Holliday, Goodwin is a big play waiting to happen after the catch. 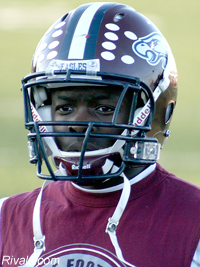 As befits a student with a 3.2 GPA, Goodwin reads zone coverages well and displays a knack for finding the soft spots in zone coverage, a necessary attribute if Texas continues to run a passing offense with Garrett Gilbert passed primarily on underneath throws.

Goodwin suffered a concussion during his senior season, raising durability questions compounded by his size. Bulking up is a priority considering his sub-170-pound weight (he likely will never reach more than 180 or so), but his track scholarship to UT could create problems if increasing his weight decreases his speed and interferes with his ability to compete at a high level in track. Unfortunately for Texas, despite his track scholarship, he would count against the 85 scholarships afforded to the football team as soon as he gets on the football field, but not until he plays a down during the regular season.

Another question is how much time he will be able to spend with the football team during spring workouts due to his track commitment. Offhand, Robert Griffin ran track last spring at Baylor, and if his freshman season was any indication, didn't have any issues with track impeding his development as a football player, though Griffin, if all reports are true, is certainly a rare case in terms of not only ability, but also intelligence and work ethic.

Goodwin will enroll in school and enter into a fray for playing time with nearly innumerable other wide receivers, especially if none transfer from the program in the offseason. Given Goodwin's need to gain weight to allay concerns about his durability and the depth chart in front of him, expect a redshirt season and any contributions to occur years down the road, if he ever sees the football field for Texas.

Despite that gloomy prognosis and questions about his ability to make tough catches ($) in traffic, Goodwin has the skills to contribute as a slot receiver or cornerback. With his speed and ability to change direction, Goodwin could eventually develop into an exceptional slot receiver, capable of breaking long runs after the catch -- the perfect complement to larger receivers like Malcolm Williams, Dan Buckner, and Greg Timmons (though Timmons may play inside as well). Those same abilities also translate well to the return game, where Goodwin will probably have his first chance to make an impact.