'Horns Still In Running For Wilson

Share All sharing options for: 'Horns Still In Running For Wilson

Turns out the 2009 Longhorn Basketball class may not be complete with commitments from Avery Bradley, Jordan Hamilton, and Shawn Williams already signed and delivered. The other prospect on the radar is Racine, Wisconsin's Jamil Wilson, a 6-7, 215-pound wing who is currently averaging 25 points and six rebounds and projects anywhere from shooting guard to power forward. Wilson thought he would make a decision in the early signing period ($) in the fall, when the three current commitments in the class faxed in their National Letters of Intent, but was unable to decide between Texas, Oregon, Michigan State, and Marquette, though the latter seems to be somewhat on the edges of the recruiting process now.

Wilson reports that Rick Barnes compared him to a young Kevin Durant, albeit with some defensive prowess. Apparently Barnes made a big joke about how Durant didn't play defense, which was certainly true when Durant arrived at Texas and something that Durant recognized and worked to improve during his year in Austin. In line with Barnes' usually honesty, he told Wilson that his breakout year would likely come as a sophomore, when Gary Johnson would have run out of his eligibility and Jordan Hamilton might not be in the program, though Hamilton and Wilson could well play together. Wilson also sounded impressed with the academic counselor ($) at Texas. 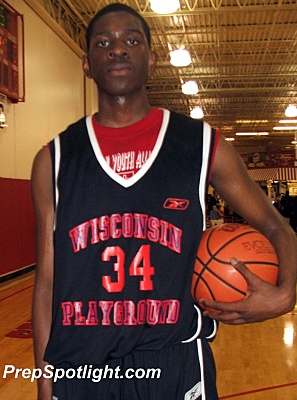 From his comments, it's hard to get a read on which school may be leading at this point, but Michigan State does have personal connections in its favor. Wilson says that he knows three players on the current team from playing with or against them and likes the coaching staff, so it seems like he feels comfortable with Michigan State, which bodes well for them considering a lack of comfort level overall lead Wilson not to make a decision during the early signing period. If he knew the players and the coaches already, then why wasn't he comfortable enough with Michigan State to commit in the fall? There doesn't seem to be a clear answer to that right now.

As for Marquette and Oregon, Wilson likes the up tempo style of play that Oregon runs in the high-paced Pac 10, which leads to plenty of shots and scoring opportunities to go around. Marquette has appeal as the local school, where Wilson would be a "hometown hero."

Like Jordan Hamilton and Shawn Williams, versatility ($) defines the game of Jamil Wilson, leading to some comparisons to Marvin Williams. Wilson may not be an elite-level athlete (though he is a star volleyball player, which has helped his vertical), but he's an elite-level basketball player with enough athleticism to succeed at the college level. For a 6-7 kid he handles the ball well, but could stand to further develop his handle if he wants to play the two or the three in college, sometimes letting his bounce get too high. His father credits Wilson's ball-handling capability to running a motion offense that demanded his bigs handle the ball away from the basket, a progressive mindset for an admitted "old school" player and former Division III baller.

He shows off the ability to be a capable passer, making unselfish plays and letting the game come to him, no small feat for a young player. There are some concerns about his jumper, in particular his slow release, but some describe him as a solid shooter with range out to the three-point line. Wilson does have the ability to play at and above the rim, where he finishes well against contact.

Not a one-dimensional player, Wilson has at times drawn raves for his defensive ability, using his excellent timing to block shots and lateral quickness to stay in front of smaller perimeter players. The questions concerning his defense revolve around consistency of effort, sometimes hard to achieve for players asked to carry a significant scoring role and exert a great deal of energy on the offensive end.

The odds are just my rough guesstimates, as there hasn't been a great deal of information coming out of Wilson's camp about his eventual decision, which is probably still nearly two months away. Texas looks to have a significant chance, with Michigan State leading the pack and Oregon and Marquette trailing. As mentioned before, Wilson has significant personal relationships with Michigan State players and has spoken well of his relationship with the coaching staff. The main issue for Texas is his early playing time, always important for talented young players. It's hard to imagine him getting many minutes his freshman season and Jordan Hamilton may even last two years at Texas.

Even his sophomore year, with Hamilton potentially gone and Gary Johnson definitely through, he would still face competition for playing time with incoming freshman Daniel Bejarano and classmate Shawn Williams, who should be ready for major minutes in his second year. Like the recruitment of Devin Ebanks, Wilson's decision could well be an issue of players in front of him and another school may be a better fit. That being said, Texas is still very much in the equation.