Share All sharing options for: Bevo's Daily Round Up 1.19.09

Rick Barnes tinkered with the lineup in the win over Texas Tech.

"I took Justin Mason away," Barnes said. "I kept trying to put him in a position where he wasn’t comfortable and he got confused. But he had a great game today."

Barnes continued to show his coaching flexibility by not compounding his mistakes.

He unveiled an altered offensive philosophy and new lineup Saturday, and after a so-so first half, the Longhorns (13-4, 2-1 Big 12) responded with more flow and movement than they’ve had in weeks. 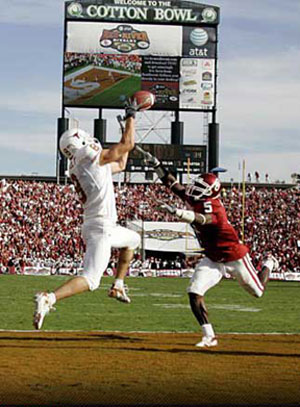 2. Texas: WR Jordan Shipley gaining a sixth year of eligibility has been way overlooked. Defense will be salty in Year No. 2 under Will Muschamp.

"I'd kind of like to stay under the radar, I guess," Gilbert said.

Had Gilbert truly wanted to remain anonymous, a career as an offensive lineman would have been more suitable. But that would have cheated him of the responsibility he loves most: making the decisions upon which outcomes hinge.

"When the game's on the line, I want the ball in my hands," he said.

Barking Carnival looks at the Texas defense and attrition.

Jai Lucas went through his second practice with the team Friday as the Longhorns prepared for today's big road test against Texas Tech. For now, his biggest contributions have to come in practice, since NCAA transfer rules call for him to sit out this season.

"He's made practices better already,'' Barnes said, "just by being there with his energy."

Barking Carnival has a recap of the Tech game.

Texas Tech is looking to play a conference game in Dallas.

Missouri's Chase Daniel struggled in the 2009 East- West Shrine Game in Houston. Nebraska running back Marlon Lucky rushed for 68 yards and a touchdown on seven carries.

Boone Pickens cannot be happy about all this. The staff turnover rate at Oklahoma State is not good.

Staff changeover is not a good thing for any program, and OSU recognizes that. Here’s a quote Boone Pickens gave me during football season:

“I think (Mike) Gundy’s done a good job. I told him, ‘I don’t want to lose any coaches off the staff, unless it’s either by Gundy’s determination or they went to a head job. That’s been exactly what’s happened. No lateral moves anywhere. They (in the past) came in for a cup of coffee. That doesn’t happen anymore.”

Except now it is. The departures of Beckman and Gonzales fit Pickens’ acceptability parameters, though staff firings always are troubling. But the losses of Taylor and Luper do not fit, and neither would the loss of Brewer.

And Mike Leach is still working on that contract extension...

How does Bob Stoops compare to Sooner coaches Bud Wilkinson and Barry Switzer?

How do his first 10 years measure to the first 10 of legendary Sooner coaches Bud Wilkinson and Barry Switzer?

"Bob took over a program that was in the dump, and he turned it around immediately," said Sooner historian Mike Treps, who has closely followed the program for 57 years. "In terms of a great 10-year period, I think Bob would have to be right behind Wilkinson."

The Sooners have moved past the loss to Florida and they are on to the 2009 season.

"We’ve moved on. We’re already on to next year," OU coach Bob Stoops said. "…Having these guys back and the opportunities, and you look at what the prospects are for next year, we’re really excited. When you look at all of the people back on defense, and now these guys back on offense. We have a chance to have another really special year next year, because of the quality of depth and experience back."

The Tulsa World thinks Bob Stoops is a classy guy.

A laid back, piano-playing connoisseur of fine wines with NFL head coaching experience on his resume, Carroll has long sold blue-chip recruits on his hip, SoCal cool approach to the college game and his NFL connections.

"The Prince of L.A.," as Carroll was recently described on the CBS program "60 Minutes," once reigned over Oklahoma and coach Bob Stoops for 60 embarrassing minutes. Carroll's Trojans hung a 55-19 whipping on the Sooners in the 2004 BCS national championship game.

But after his antics at Sanchez's press conference, Carroll demonstrated he doesn't belong on the same field as Stoops when it comes to handling a player who decides to ignore his coach's advice and leave early for the NFL.

The University of Colorado's basketball team is struggling this year. Head coach Jeff Bzdelik is frustrated.

"I’m tired of being politically correct," Bzdelik said. "We’re not on a level playing field as of this moment with other schools in the Big 12. Fortunately, our administration understands that.

"So, it’s a process. I’m excited about where we’re headed; I know the support is here to get us to a level playing field."

OU's Jeff Capel is tired of all the doubts people have about him and about the Sooners.

Even today, with sixth-ranked Oklahoma boasting a 16-1 record and a spot atop the Big 12 standings, Capel knows there are still those who doubt him and his team.

The coach is too young. The guards are average. The bench is too shallow. Capel heard it all leading into Monday’s 78-63 victory over No. 11 Texas. Lounging in a corner booth at Louie’s Sports Bar & Grill the day after the win, Capel still seemed agitated – and motivated – by Oklahoma’s detractors.

“I get tired of hearing about what we don’t have,” he says. “We’re 16-1. We’ve played a good schedule. We won the Preseason NIT and we just beat Texas for the first time in six games. Let’s talk about that."

1. Florida: No Harvin? No problem. More Rainey. More Demps. Oh, and that Tebow guy is pretty good, too. The Gators are locked and loaded to make it three in four years. Issue: National championship hangover.

2. Oklahoma: OU won't average 54 again, will it? The entire backfield is back. The defense will be older and wiser. Special teams have to get better, but Bob Stoops has the entire offseason season to work on them. Issues: DeMarco Murray's health. Bob in big games.

After the declarations for the NFL draft, here are the winners and losers.

Candidates are sending in resumes for the UTSA head coaching job.

Bill Bradley, a former UT player and NFL star mentioned as a potential candidate even before the regents approved UTSA's plan to start playing in 2011, said he plans to apply.

Davie and Wright declined to comment on whether they are interested in the UTSA opening, but they didn't rule out applying.

Thanks to Barking Carnival for finding this gem.