Rating (Rivals): Three out of five (Four stars from Scout)

If Paden Kelley is one thing beyond any other as a football player, he's a winner. A teammate of Garrett Gilbert for the two-time defending state champion Lake Travis Cavaliers, Kelley elected to block for his teammate since third grade on the college level. Even at a national combine Kelley was a winner, taking home the offensive line MVP award ($) at the Ultimate 100 National Underclassmen Combine in New Jersey before his junior season. 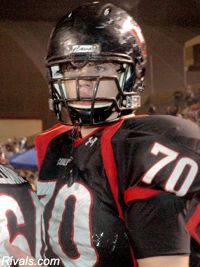 While Kelley doesn't have the typical weight associated with tackles, he may move to guard at the collegiate level, where he can use his superior reach blocking ability ($) and excellent feet to get to the second level, a skill at which he excelled in high school. Simply put, Kelley is an excellent athlete for an offensive lineman, having experience at fullback, linebacker, and defensive end ($) in his past. Kelley takes advantage of his long arms and good hands to keep defenders away from his body, while using his technique to keep his feet moving and quickly lock onto defenders. As a pulling blocker, Kelley works excellently for trap, counter, and sweep plays. 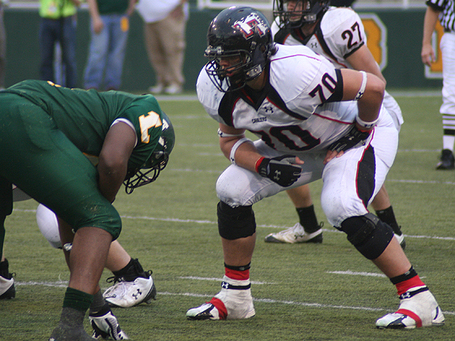 In pass protection, Kelley normally shows good bend and body control, with quick enough feet to generally have success in pushing edge rushers past the pocket. As is crucial, Kelley gets his hands on the defender's body quickly and usually has good body control and balance.

Kelley's performance in the Under Armour All-American game was not his finest hour. Playing at left tackle, Kelley experienced considerable struggles attempting to block Michigan commit Craig Roh, a standout in the game who beat Kelley using a spin move on one play, though Kelley found himself susceptible to both bull rushes and rushes off the edge. Flexibility is an issue ($) for Kelley as it limits his ability to get proper knee bend and his first step lacks the explosiveness needed to play outside at tackle.

Despite his skills as a run blocker in space, Kelley struggles maintaining proper pad level in short-yardage situations and when pulling to trap opposing defenders, an odd weakness considering his ability in getting to the second level. Fortunately, such technical difficulties like pad level are generally remedied quickly at the college level or the kid doesn't have much of a shot at seeing the playing field from anywhere other than the sideline. Kelley also needs to improve his lower-body strength to be able to drive block at the next level.

Though Kelley likely projects as a guard, he doesn't have much experience playing out of a three-point stance, which may flatten his learning curve on the college level. In addition, Kelley also had some back problems during his sophomore year of high school that caused him to miss half a season, though there has been no re-occurrence to suggest a chronic problem.

The disappointing performance in the Under Armour game lowers any expectations that Kelley might contribute as a freshman, though he was playing tackle instead of guard in the game and did apparently beat out the other competitors for the important left tackle position. It's easy to say that Kelley needs to gain weight to play inside against 300-pound defensive tackles, so he will be an interesting test case to determine how much long-term commitment the Texas coaching staff has towards the zone blocking scheme currently employed with little success this last season. Kelley still has a lean body, which the Longhorns coaching staff prefers because it means that Kelley is capable of adding weight in the weight room rather than at the training table.

In the zone blocking scheme, Kelley probably doesn't need to gain much weight, as the scheme places a premium on the type of good feet and movement that Kelley already has. Therefore, any weight gain to play guard either means that he can maintain his quickness at that weight or that the coaches plan on going back to a man-on-man blocking scheme emphasizing moving the line of scrimmage downfield rather than sideways.

With guard Charlie Tanner and Chris Hall the weak links on the starting offensive line and an open starting spot at guard that Michael Huey may or may not fill, there are chances for young offensive lineman from the 2009 class to gain early playing time. However, with his lack of experience playing from a three-point stance, the other three lineman in the class are probably better equipped to play early than Kelley, who will likely redshirt and may be the last of the four from this class to see the field.