On the Road to Scottsdale: Day 1

Share All sharing options for: On the Road to Scottsdale: Day 1

Halfway between Houston and San Antonio on the Road that Goes Forever, as I cursed myself for not having anything to write since Texas got the final BCS shaft, I decided that I would make good use of the plethora of hours I had at my disposal while my girlfriend took her turn at the wheel.  Since many of you aren't attending the game, and I'd imagine the vast majority of those who are attending will be traveling to Scottsdale at 36,000 feet, I feel like it's my duty to at least give you all an idea of what you're missing on the ground.  1,000 miles of I-10 to cover in the next three days, and you're riding shotgun with me.  Along the way, I'll talk about the bowl games from the previous day and any that happen to be coming in on my stunningly low-tech terrestrial radio that somehow slipped past my nerditude and countless Christmas and birthday wish-lists.  I'm also on a mission, and that mission is to see Brutus Buckeye cry a real tear through all that felt.  So I'll make sure to bring it all back to the game at hand by the time I pull into my hotel for the night and upload the day's diary. 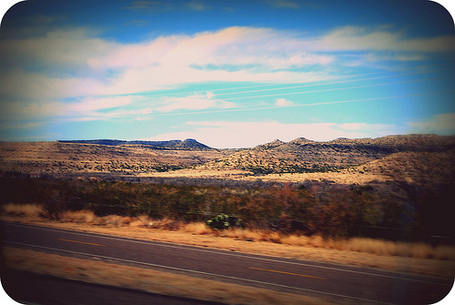 Today's diary starts off a few miles past Kerrville in the beautiful Texas hill country, where the sky's as blue as the grass is yellow, the deer are from India, and the speed limit is 80 miles an hour until you hit El Paso (the picture above is from much further west, obviously).  I'm still picking up the Cotton Bowl on AM 1300 from Austin, amazingly, but only on one side of each hill, which makes for endless fun speculating just how that touchdown was scored:

The announcers start yammering about how you can't beat Tech with smash mouth football because you can't score enough points, when I am suddenly reprieved by the total loss of the signal for good.  Later, I find out that Tech's losing 38-21 in the second half.  I didn't find out how that turned out until much later when my new BlackBerry came back into data service and I read the comments on the open thread.  Geez.  Thanks a lot to Texas Tech for making our loss to them look worse all of a sudden than Florida's to Ole Miss.  You just cannot count on the rest of the Big 12 to play worth a damn outside of conference.  Why can't the Cotton Bowl be your Super Bowl, Tech?  And why does Okie State decide to look like a JV team on defense against Oregon?  On a positive note: Thanks to Northwestern for not utterly embarrassing our conference, and thanks to Kansas for whipping Minnesota like they should have.  Also, thanks to Nebraska and Clemson's "Bad Greg"-like OC for giving us some sort of evidence that we're playing defense.

Tech getting stomped isn't all bad, though.  It eliminates that whole three-way tie thing, simultaneously ruining OU's best win so far.  If by some miracle OU doesn't choke in the championship game, and we put a hurt on Ohio State, the AP will have no excuses not to make us national champions, thus setting up the meanest State Fair ever held next October.  Can I go ahead and put in for tickets now?  It's enough to make a guy think about going to a women's basketball game to earn priority seating status. 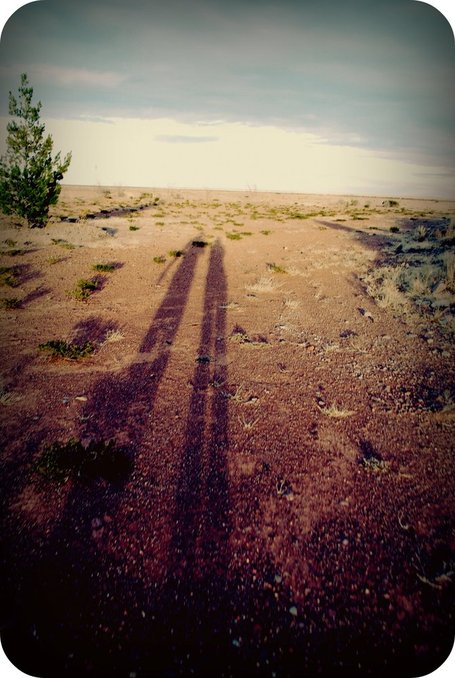 The landscape has slowly lost its trees, giving way to an endless sea of mesquite bushes and tan dirt where there used to be tan grass.  No, I'm not metaphorically talking about this year's bowl season, though you wouldn't know it.  Trying to remember the good games, I can think of Boise State - TCU, which was really only very close because TCU couldn't convert any of their drives into points.  If you have a foot fetish, maybe you would have liked the punt and field-goal fests that were the Oregon State - Pitt and Nebraska - Clemson games.  There was that great UNC - WVU game, which got way too creepy when everyone started slobbering all over Pat White there at the end.  But the UNC receiver with the ridiculous hands was a-freakin'-mazing.  I hope these pictures turn out all right that I'm taking, because the sun broke through the clouds over some short mountains and this is the equivalent of the few games we've seen so far that had any power to hold my attention. 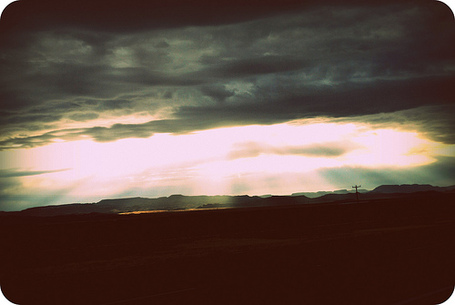 The Rose Bowl was a huge disappointment, and you could see where the game could have been a lot different if it weren't for a few bonehead coaching decisions by PSU early.  Running a slow straight handoff play on 3rd and 1?  Twice?  Fail.  Obviously JoePa didn't watch the first Texas possession in Lubbock.  I'm not going to talk about the Orange Bowl, because I didn't even watch it.  Wouldn't have paid nine bucks to see it if I lived outside the stadium. 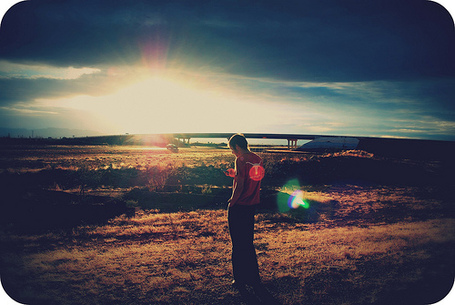 It's starting to get dark now as we close in on El Paso.  The girlfriend drives like a bat out of hell, which is great so long as I'm not paying for her insurance.  Do I feel bad for her dad?  Not one bit, because he didn't raise his daughter to be a Longhorn.  Plus, she takes great pictures.  Sometimes you get what you deserve, though never in football apparently.  Take the Fiesta Bowl for instance.  Instead of a resurgent Alabama team and the chance to help dispel the myth that we can't play defense and our offense is junk, we get a shot to not screw it up against an Ohio State team that can't even sell all of its tickets to the game.  It could be worse, of course.  Shuffle the order of losses a little and Texas Tech could be headed to the (other) desert and we could be the ones Stoops-ing away a Cotton Bowl game against Houston Nutt.  That's why I'm making this trip and why I drove completely across Texas in one day so that we could spend two full days traversing the disaster that is the New Mexico and Arizona highway systems (More on that tomorrow).  The Enemy awaits...

What do I expect from this game?  Let's start with the offense today.  We certainly have every reason to pound the Buckeye's tails green and muddy, but I wouldn't be a Longhorn if I didn't harbor a nagging fear that Greg Davis has randomly decided that we should suddenly run I-form on our own goal line, or that we should allow shot after free shot by big uglies on Colt as we refuse to make tOSU pay for blitzing on every damn play.  We've basically been guaranteed by Tressell that the Bucks are going to completely change their identity in preparation for this game, and from my experience, that means that we'll do absolutely jack until halftime in this game.  The difference is that we have a robot-warrior at QB who will make whatever Davis calls work with ridiculous accuracy and timing, so long as the receivers catch the balls.  I'm expecting something like the A&M game, with us looking completely confused early on as we fart around to the tune of 10 or fewer points before sucking in our paunches and exploiting those of the Buckeye front seven for mucho Colt-to-Shipley love connections over the middle.  I think we can get to 40 on these guys if we engage the clutch early enough, but if we're ahead by more than two scores in the fourth, Mack will shut everything down and we'll end up with 34 or thereabouts.

Ah, the warmth and comfort of a West Texas HoJo...  Quite a long trip today.  About 800 miles in 14 hours with a stop to visit the grandparents along the way.  Now I'll watch what's left of the Sugar Bowl (to be discussed tomorrow as we weave through the speed-trap minefield of New Mexico), and say my prayers.