Despite being listed as an inside linebacker on his Rivals page, Allen projects as a true middle linebacker in college -- a downhill linebacker ($) with the ability to knock the absolute slobber out of running backs coming through the hole or tight ends in the flat, as he did in the Army All-American game. With a strong and thick body, Allen looks the part of an extremely physical presence, combining that strength with short-range explosiveness. Unlike most high school players coming into college, Allen physically looks like he's ready to step on the field and contribute, suggesting that his strength training work will focus on maximizing his speed to the greatest extent possible.

Allen's size can sometimes be deceptive, as he moves well laterally and with a fluidity unusual for someone of his size and one of the reasons Allen is such a highly regarded prospect. As a tackler, Allen shows great form, wrapping up opposing players and using his legs to drive them backwards and into the ground, a practice that severely limits second efforts and additional yards after contact -- Allen would have been at home tackling Beanie Wells in the Fiesta Bowl and would make a great Big 10 linebacker. The production as a tackler on the high school level ($) is there, as Allen notched 122 tackles, 16 tackles for loss, four quarterback hurries, four sacks, and a fumble forced and one recovered as a senior, one fewer tackle than he did his junior season. 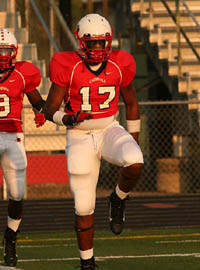 Will Muschamp loves linebackers that can blitz and get to the quarterback, with some talk of even using Keenan Robinson in the Buck Package next year, reprising the role developed for Sergio Kindle this season. Allen fits into that mold with significant blitzing experience in high school and the speed/strength combination Muschamp covets. The Irving Macarthur product could well be the next Buck Package linebacker for Texas.

The question about Allen is his place in the current Big 12. Jared Norton is a very similar player to Allen, with both larger, physical middle linebackers. However, Norton struggled in his first season of significant playing time, often lacking the speed to cover skill position players in space. Like Norton, Allen lacks true sideline to sideline range -- Derrick Johnson he is not.

Despite his lateral quickness and fluidity diagnosing and reacting to running plays, Allen doesn't display the same fluidity in his hips in pass coverage, often finding himself flat-footed, a recipe for big plays. In fact, Allen looks stiff at times, even in pursuit of running plays, struggling with changing direction, In this sense, it's imperative that Allen doesn't add too much weight in college and further limit his foot speed and lateral quickness.

Given his size and strength, Allen rarely had to deal with blockers who could overpower him in high school, leaving his ability to shed blockers underdeveloped and the technical aspect of his game Allen most needs to correct and improve upon. Often Allen struggles when dealing with offensive lineman because he plays too straight up, failing to use his strong legs to help his efforts. Once again, Allen is another player who will grow quickly when the technical aspects of his game improve with good coaching in college.

In questioning Allen's eventual role in the defense, it's not to say that Allen lacks the proper skill set to find success at Texas, it's rather to say that his role may be more situational than every-down. That is, unless Mad Dog can pull a miracle and increase Allen's speed in his first several years in the program. Beyond that, Allen projects as a pure run-stuffer -- in other words, a two-down linebacker at the college level. In that sense, Allen is a little bit like a young Sergio Kindle, a player capable of playing downhill, but uncomfortable in space, though Allen seems more advanced in his pass-covering ability than Kindle, who never backpedaled in high school. Of course, Allen can expand his role to a third-down linebacker, but Muschamp will probably use him as a pass-rusher on third down if Allen shows the same aptitude for getting to the quarterback in college he did in high school.

It could be possible that if Allen starts gaining weight when he gets into the strength training program at Texas, he could spin down to the defensive end position, though there hasn't been any public discussion of him doing so and Allen doesn't seem to have the room on his frame to grow that other players in the class possess. Basically, the comment is simply an exercise in remote speculation, but does seem worth mentioning.

In terms of contributing early, Allen could see time as a freshman backing up Jared Norton and projects to take over his job when Norton graduates after the 2009 season. As an early enrollee, Allen will help his cause by being able to participate in spring practice and should benefit by not having any direct competition at his linebacker position in this class, as Patrick Nkwopara projects as an outside linebacker or rover/linebacker hybrid.