Defensive end Tevin Mims found himself one of the fastest-rising prospects in the state of Texas after an outstanding senior season, as he lead Stony Point to the state semifinals for the first time in the nine-year school history, notching ($) 54 tackles, 14 sacks, 11 tackles for loss, two forced fumbles, nine pass breakups, and 13 quarterback pressures. Mims rose so quickly that by the final LSR he was the 16th-ranked prospect in the state and earned a fourth star. A shoulder injury during his junior season held back his development, a torn labrum, the same injury suffered by Drew Brees and Garrett Gilbert, respectively. The two latter players recovered well from their surgeries, as did Mims, who experienced no pain or issues with the shoulder during the football season. However, the surgery did keep him from attending junior days or camps last spring ($), which kept him behind other players in his class in terms of physical development and more importantly, recognition from major college programs.

A lot of speculation surrounds Mims about the position he will end up playing in college. With the type of frame strength and conditioning coaches dream about, Mims was able to add 20 pounds of muscle between his recovery from shoulder surgery and the start of his senior season. His high school coach, Craig Chessher, believes that Mims could add even more good weight  ($) once at Texas, making him a candidate to spin down to the defensive tackle position, where he could compete more quickly for playing time:

Tevin weighs 240 and looks like he weighs 220. He's a kid that could end up being a really big guy and I think that could happen really quickly. My guess is that he'll play defensive tackle. Maybe he'll just be a strong 240 and stay at defensive end, but I think a move could happen. Once he gets on the three or four squares a day and lifting at Texas, he's probably going to be a much bigger guy. 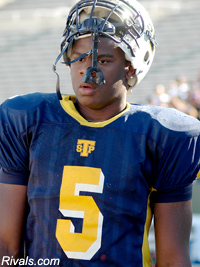 "He's got a good wing span. His arms are longer than what his body would indicate. He's got the uncanny knack for turning hips when he's a pass rusher. He can really turn the corner easily, there's no effort there. It's a natural movement for him. I coached some really good players at North Shore but they didn't have that natural hip turn. I coached college for six years and that would appeal to me.

While Mims does get off the ball well, it's really his physicality as a pass rusher that stands out. Mims has the ability to bend his legs and generate power from the bottom half of his body, while also using his hands well to punch the opposing offensive lineman and keep them out of his body. Mims shows proper placement of his hands ($) and has the long arms needed to effectively use them. As a bull rusher, Mims can knock offensive lineman off balance and get by them, a skill that would serve him well on the interior of the line, where getting to the quarterback is more about leverage and strength than pure speed.

Mims also pursues plays well down the line of scrimmage, showing the ability to crash down the backside of a play and make stops if his teammates force a running back to slow down or make a cut. And there's a reason he can do so, according to BOB's Bobby Bragg:

He also does a good job of taking on a cut block and staying on his feet. He attacks the cut block with bent knees, uses his hands to push defender to the ground and uses his quickness to slide laterally and stay on his feet.

It's certainly a good sign that Mims does some things well technically, meaning that he won't have to completely redesign his game from a technical aspect on the college level. A powerful lower body and the ability to add significant muscle to his upper body has lead to the rise of Tevin Mims as a college prospect. The natural hip turn and his good hand placement and leverage are the ideal combination for a college rush or power end.

Despite his incredible production on the field, particularly in the playoffs, Mims isn't an elite-level athlete like Alex Okafor or Devon Kennard, as he lacks the explosiveness of either and sometimes struggles to change directions and move laterally. To simply say that Mims lacks elite-level athleticism sells him short, however, as Mims simply makes plays on the field and his production is hard to argue with.

Mims also needs to diversify his pass-rushing arsenal. Readers are probably tired of hearing that phrase by now, but it's true for virtually every high school pass rusher. Bragg has the specifics on what Mims can do to improve his pass rushing in college:

Mims also has to develop a low inside shoulder rushing the passer, a more refined and powerfully quick rip move, a secondary move when redirected and needs to play hard on every snap.

Mainly, Will Muschamp will ask Mims to get to a designated spot on the field, then convert his speed into power by attacking the offensive lineman, Muschamp's primary requirement. If Mims can do that, he will get early playing time.

Along with his ability to convert speed into power as a pass rusher, the most important factor in determining the position Mims will ultimately plays is how much weight he adds to his frame in muscle when he gets to Texas. His high school coach projects him to add between 20 and 30 pounds, which pretty much makes him a defensive tackle, though he could compete at the power end position at Texas vacated by Henry Melton. Recall that Lamarr Houston played his sophomore year at power end at around 260 pounds. Mims could probably add 10 pounds of muscle during the summer at Texas and compete for playing time at that position, or redshirt and add the weight to spin down to defensive tackle.

The current defensive ends on the roster seem like more of the quick end variety, like Eddie Jones and Sam Acho, a group also including Alex Okafor, with Mims not really fitting into that group, essentially eliminating the quick end position by virtue of his skill set.

Mims certainly doesn't have the developed upper body yet because of his shoulder setback, but seems more likely to compete for playing time next season than Dominique Jones or Kyle Kriegel, both long-term projects. Whether Mims ends up at power end or tackle, his versatility and frame provide a significant amount of upside.

The Longhorns typically go after one or two players every year late in the process, often drawing fire from the recruitniks in Longhorn Nation for taking what they consider to be marginal players. Tevin Mims does not fit into that category whatsoever and there is no doubt that he will have a chance to play at Texas, likely relatively early in his career. Similarly, there's little doubt that Mims will develop into a solid, if likely unspectacular, player in the rotation, providing much-needed depth on the defensive line. All in all, the Longhorns were probably lucky that Mims was open enough late in the process to consider attending Texas after other schools that had put more effort into his recruitment. But, hey, it's good to be king.