Looking at Thomas Ashcraft, his potential placement on the interior of the offensive line becomes immediately apparent -- the guy has significant beef in the lower part of his body. That beef belies Ashcraft's feet, however, as the Cedar Hill product moves well when pulling and trapping ($) from his guard spot, showing deceptive athleticism. That athleticism translates to the pass blocking game, where Ashcraft can line up in a three-point stance at tackle and get back into his set position before the opposing defender can get into his body. That's an invaluable skill to maintain pre-snap deception about whether the play will be a run or a pass, robbing defensive players of a quick jump in the pass rush, instead forcing the hesitation needed to read and react to the offensive lineman after they come out of their stance.

One of the foremost questions to consider when evaluating offensive lineman committed to attending Texas is how well the player reach blocks and projects as a zone blocker. Until Texas changes their running scheme, that skill will be important beyond nearly any other, with pass blocking certainly a close second. Ashcraft has the agility to double team at the point of attack, then get to the second level, where he latches onto defenders and displays the tenacity to block up through the whistle -- that little nasty streak that each offensive lineman needs. 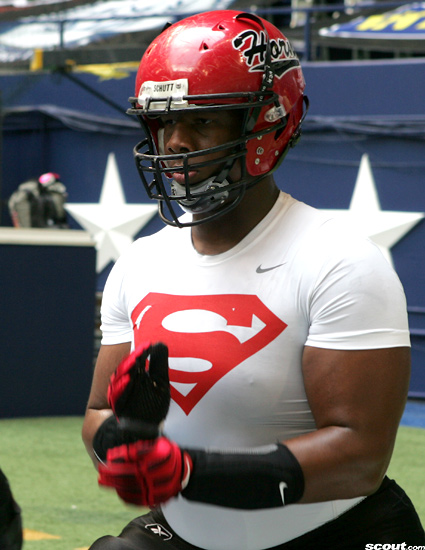 Even in the current Texas scheme, reach blocking isn't everything. On short-yardage situations the Longhorns still drive block and an offensive lineman can't be one dimensional in terms of only being able to effectively one way. Of course, considering the struggles in the running game this season, the Longhorns may well decide to return to a drive-blocking, man scheme. In that case, Ashcraft fits in well, strong enough to drive defenders off the ball and stay on his feet throughout the play.

Baron Flenory, a recruiting analyst at Scout, weighs in ($) on Ashcraft's strengths:

Ashcraft is everything you look for in a dominant left tackle; he is massive with an athletic frame and good feet. Once he latches on, he can run with a defender, shadowing their every move. It is hard to beat him with strength because he is too big and just as hard to work a move on him because he has great feet and can stay in front of a defender. On top of all that, he has a huge upside.

Already at 300 pounds, Ashcraft has a body that is ready to contribute immediately on the college level, as strength doesn't seem to be a serious impediment to early playing time (witness the guns above), though he can still stand to improve it.

While Ashcraft does well in most aspects of offensive line play, there are several areas in which he can improve. Most notably, Ashcraft must use his hand placement better inside the framework of the defender's body to take advantage of his long arms and keep the defender away from his body. Better knee bend and a flatter back coming off the ball will make him a more powerful blocker, along with maximizing his explosiveness through his strength-training regimen.

Rivals recruiting analyst Barry Every evaluated ($) Ashcraft at the Under Armour All-American game, concluding that Ashcraft needs to work on his "bottom heavy frame" and, as a result, needs to work on his lateral quickness. Apparently Ashcraft struggled some in pass protection with his ability to move his feet.

A player with serious upside, Ashcraft already possesses the skills to contribute in the blocking scheme the Longhorns employ. While the coaching staff prefers lighter offensive lineman they can mold as they like, Ashcraft exists slightly outside that continuum, already possessing significant beef. That's not to say that Ashcraft is fat and out of shape, however, as he carries a lot of weight in his lower body, while looking only slightly doughy in his upper body when I saw him in person at a football game last season. In older pictures, he looks pretty cut in his upper body, so he may have added that weight recently. 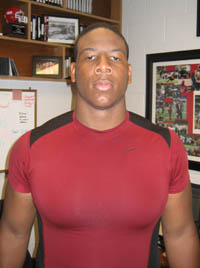 The key for Ashcraft, in my opinion, will be to add weight as muscle rather than fat, because he can play effectively in college without having to put on anything more than 10-15 pounds. In fact, rather than adding weight just for the sake of adding weight, Ashcraft needs to focus on increasing his explosiveness to the greatest extent possible.

With the versatility to play in a man or zone blocking scheme, Ashcraft projects well as a guard at Texas, as his frame and bulk make him a candidate to play on the interior of the line, though he played outside at tackle late in high school and early at guard. Although there are an abundance of guards on the Texas roster, Ashcraft is skilled enough naturally and possesses enough technical refinement to compete for playing time when he steps on campus, which will occur this spring as a December high school graduate. Participating in spring practice and off-season weight training will put Ashcraft into an even better position to contribute than a similarly talented player enrolling in the summer.

Despite the reasonably solid projection of Ashcraft as a college guard, he could play tackle if needed. The reason for the movement of Ashcraft outside in high school was because of the emergence onto the scene of 2010 guard prospect Adam Shead, forming a left side of the line powerful enough to pave the way ($) for running back Ben Malena's more than 2,000 yards and 34 touchdowns in 2008. In other words, it was a move borne of necessity. Of course, Ashcraft moved inside ($) in the first place because of a deep group of tackles on the roster when he was a sophomore. Make of that what you will. Offensive line coach Mac McWhorter told him back in the spring that he get a chance to play any position on the line for which he shows an aptitude. With only four tackles on campus next season with experience and Adam Ulatoski set to graduate, there could be a need for Ashcraft at that position, depending on where Mason Walters and Garrett Porter end up and how long it takes Paden Kelley to develop.

At the Under Armour Game, Ashcraft played both inside and outside, showing an eagerness to work against the best defensive lineman on the opposing squad. Barry Every concurs with the projection of Ashcraft on the interior of the line in college. Ashcraft's high school coach, Joey McGuire, believes that Ashcraft will play tackle at Texas.

Whatever the position, Ashcraft has the potential to develop into a dominant college offensive lineman and is a great pick up for the Longhorn offensive line.