The only out-of-state recruit currently committed in the 2009 class, Derek Johnson blends a unique combination of speed and strength. With a 330-pound bench press and 485-pound squat, Johnson draws comparisons to a "miniature Incredible Hulk ($)." As evidenced by his five-flat 40 time, Johnson has good speed and explosiveness (good enough for Rivals to rank him in the top 10 nationally in quickness ($) at his position), but it's his strength that he uses to knock blockers backwards into the quarterback, often collapsing the pocket with a straight bull rush.

A physical anomaly at defensive end in high school, Johnson racked up tackles, with 98 tackles in his sophomore year and 81 his junior season, with 10 total sacks over those two years, numbers aided by his high motor and ability to finish plays when his pursuit catches up to the ball carrier. For his senior season ($), with more offensive attention paid to him and consistent double or triple teams, Johnson notched 76 tackles, 12 quarterback pressures, 10 tackles for loss, and a fumble returned for a touchdown. In one game last October, Johnson recorded ($) an outstanding 19 tackles, with six tackles for loss, and two sacks, despite facing consistent triple teams.

For many high school defensive tackles, the main issue revolves around pad level. Playing at a relatively small school in Arkansas, Johnson rarely matches up against players his size, so he can get away with raising his pad level early in the play and rarely suffer the consequences. Since his strength is already present in spades, Johnson needs to focus on firing his hands to keep offensive lineman out of his body and improving his flexibility will allow him to play with better pad level. Taking better angles in pursuit will allow him to make more plays around the line of scrimmage.

For defensive tackles early in their career, strength is a big factor. Work in the summer and fall practice should help Johnson refine his techniques with his hands and play with better pad level. Just his sheer strength makes Johnson a guy worth a look early in the season against weaker opponents (read: everyone on the non-con schedule for the Longhorns). 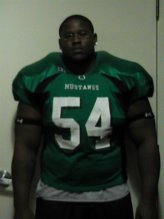 Like most position battles, whether or not Johnson will see the field will be determined as much by the other players battling for a spot in the rotation: redshirt freshman Jarvis  Humphrey, senior Ben Alexander, and true freshman Calvin Howell. Johnson's ability to bull rush offensive lineman and collapse the pocket may lend to some work in passing situations, where he can use his strength to full effect.

With the recent discussion about who and how to pursue from outside the state of Texas, Johnson's situation sheds light on how important the player having a former connection with the state becomes. While Johnson was born in Arkansas, he spent seven years in El Paso before moving back and eventually chose Texas over offers from the likes of Arkansas and Oklahoma, among others. Johnson also illustrates the need to go around the country to find defensive tackles, the most difficult position to fill in college football.