With good size for the position and a developed body, Vaccaro passes the eyeball test. What he shows on the field supports how he looks in pads -- capable of delivering big hits in support of the running game or on receivers coming into his area, Vaccaro has the physical presence and nasty streak to occasionally make receivers short arm the ball, perhaps the true test of a safety's intimidation factor.

Playing with the instincts necessary for his position, Vaccaro reads and reacts well ($) when playing man or zone coverage, jumping routes and displaying the ball skills to high point a potential interception, along with timing his jumps well. In man coverage, Vaccaro can get up on the line of scrimmage to jam and re-route the opposing receiver. Those skills paid off ($) in the form of seven interceptions as a junior, including one from the hand of Robert Griffin in a victory over Copperas Cove, who set the NCAA record his freshman season for most passes attempted without an interception. 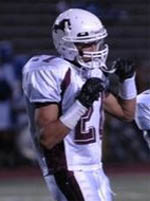 When playing the running game, Vaccaro reacts well to his reads and does a good job of avoiding blockers with his hands. In fact, Vaccaro avoided blockers so well and tackled so physically in high school that his coach at Early moved him to linebacker for the games he was able to play in his senior season.

Beyond his physical skills, Vaccaro comes across as an intelligent, mature kid. He's helped his mother raise his five siblings after his father passed away. He has a 3.5 GPA and feels grateful for the opportunity to have his schooling paid for, as few members of his family have gone to college.

The biggest knock on Vaccaro has less to do with his own faults than with who he isn't. Vaccaro isn't Craig Loston or Kevin Brent, the two superstar safeties who spurned the Longhorns to leave the state and may end up being two of the best safeties to come out of the state of Texas in years. That's not to say that Vaccaro doesn't have his own strengths, because he does, but he just isn't on the same level athletically as the other two.

Besides who he isn't, the other aspect of his game that Vaccaro struggles with is one that plagues Blake Gideon -- he has trouble breaking down and changing directions when pursuing running plays downhill, causing him to miss tackles or overrun the play. In my opinion, the ability to break down and make plays against more athletic players isn't something that can be taught. A player either has it or doesn't and there are questions about whether Vaccaro does or not.

Vaccaro fits the mold of defensive backs craved by the Texas coaching staff, with the ability to line up on slot receivers, giving Muschamp the option of playing three linebackers on first or second down when the opposing team goes with three wide receivers. In the Big 12, where most teams have at least three wide receivers on the field virtually every play, safeties must be able to cover receivers with the same aptitude as cornerbacks. Even with that coverage ability, there isn't currently any talk about training Vaccaro at cornerback, where the Longhorns have greater need than safety, likely because his skill set fits the safety position more than, say, Eryon Barnet

With five safeties on the depth chart in front of him, Vaccaro will enroll for the spring semester hoping to get some practice time towards the end after working to rehab from the knee injury ($) that cut short his senior season after the third game. The knee injury will set him back, but Vaccaro was a special teams standout in high school and could see the field as a freshman on the kick and punt coverage teams. As far as being limited in his lateral quickness, from all accounts Vaccaro is more athletic than Blake Gideon, which bodes well for his career, and the Longhorns aren't counting on him to be a major contributor for several years, if ever.