The Horns beat the Aggies Saturday night 67-58. Damion James led all scorers with a season-high 28 points.

James opened the game up by attacking the rim. His first bucket during that surge was a driving layup that also drew a foul. One possession later, James scored by flying away from the rim and flipping back with his left hand.

His final bucket in the run — which put UT out front 52-40 with 9:26 to play — was an alley-oop slam initiated off the fast break by guard Varez Ward.

“I didn’t know that I had that many straight points,” said James, after scoring more than 20 points for just the second time this season. “It was just open shots.”

Congratulations to Colt McCoy once again. McCoy was named the Chevrolet Offensive Player of the Year. 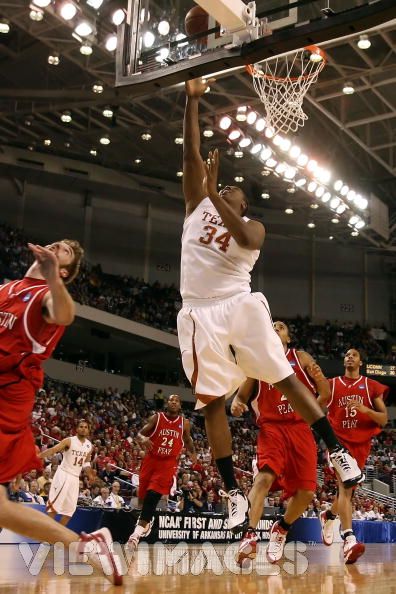 Dexter Pittman is a really nice guy, just a great big teddy bear. That could be good unless you play college basketball.

And that’s the problem now — basketball isn’t a sport that lends itself to hugging.

"I was raised to be sweet. It’s the only way I know. Now, I’m trying to have a mean streak," the 298-pound Pittman said. "It’s like a switch that I have to flip off and on, and it’s a work in progress. I need to become more physical."

Rick Barnes worried about moving Justin Mason from wing to the point, but now that Mason is back his game has improved.

Mason was back on the wing last Saturday in Texas’ victory at Texas Tech. He responded with 15 points and 10 rebounds, his first career double-double.

"It feels good to get back to doing what I’m used to doing, to play a more natural position," Mason said this week. "I tried my best at [the point], but at the same time I could tell my defense wasn’t as intense and I wasn’t able to rebound the ball as good as I had been able to in the past."

This could be Matt Hill's year.

He took care of small details that added up to big things, setting screens at the high post, making passes to keep the offense flowing, defending in the low post.

"He's a glue guy," said Todd Wright, the Longhorns' strength coach. "A guy you need to make the engine go."

After the game, when Barnes praised Hill in the locker room, teammates applauded. Damion James pronounced Hill as most valuable player for the day during a postgame news conference.

"We love Matt to death," Atchley said. "We know how hard he has worked, what he has been through."

Barking Carnival has some thoughts on the A&M game and a post-game wrap-up.

The Texas Women's Basketball team lost to the Sooners 89-69.

Texas Longhorns baseball team will host Fan Appreciation Day at UFCU Disch-Falk Field on Sunday, February 15 starting at 1 p.m. The team will have a scrimmage starting at 4:10 p.m.

Mel Kiper put out his Top 13 for the NFL draft. Brian Orakpo is listed at No. 13 and Kiper thinks he may be playing for Washington. Redskin fans are thrilled.

Four Longhorns will be playing in Superbowl XLIII. Casey Hampton, Limas Sweed and Tony Hills play for the Pittsburgh Steelers, and Lyle Sendlein plays for the Arizona Cardinal.

Even though the Aggies lost to Texas, A&M coach Mark Turgeon was pleased with their effort.

"Losing is no fun, but I can live with our effort," Turgeon said. "I was really proud of our group."

Turgeon wasn't as downcast after this loss as he has been after some of the others.

"I thought we battled them," he said. "We played smarter tonight, played with a lot more intelligence.

"The elephant in the room is we have trouble scoring," he added. "But as a coach, you're happy when you execute, and we executed tonight."

I Am The 12th Man believes that the Aggies are better than Texas in overall talent, but but they are outmatched when it comes to coaching.

What does Missouri need to do to get the next level in terms of program prestige and winning?

1. Recruit at the Texas/Kansas level every year, creating a highly skilled team capable of outgunning opponents. They can stand on the accelerator for entire games if they have better players than their opponent.

2. Balance their approach as needed. Teams don’t have to impose their will for 40 minutes to win consistently. Teams can win by mounting offensive runs and preventing opponents from doing the same. Settling down at key points in the game would allow the Tigers to make their trademark 12-3 and 15-4 runs stand up.

Texas Tech coach Pat Knight wants to model his program after another winning coach in the Big 12: Texas' Rick Barnes.

We won’t know until then where Pat can take the program in the next few years. But he does know what he wants it to be — like Rick Barnes’ program at Texas.

"His program is the one I’m trying to emulate since I took over," Knight said. "I’m trying to do a better job of recruiting, to get this program someday to compete with his."

Missouri walk-on kicker Jeff Wolfert will be rejoining the swimming and diving team for the Big 12 conference meet.

Nebraska quarterback Joe Ganz was overlooked in the Big 12 and now it is happening again.

"I’ve heard from a couple teams — San Diego and Denver," he said Thursday. "They said they liked me."

Ganz obviously has become accustomed to underdog status, and here we go again. Granted, nobody expects Nebraska’s 2008 starting quarterback to be a first-round NFL draft pick April 25-26, or even a first-day selection.

College Football News looks at who's hot and who's not after the 2009 Senior Bowl. Graham Harrell's NFL stock seems to have taken a plunge.

There were questions about whether the former Red Raider star could look like an NFL quarterback when put under center. He didn't throughout the week of practices, struggling with his consistency and his accuracy, and then came the nightmare of the Senior Bowl. He didn't show off an NFL arm and completed just 4-of-13 passes for 40 yards with an interception.

They are already counting down the days. Tulsa World columnist Dave Sittler wants a countdown calendar for the Oct. 17 Oklahoma-Texas game on the OU page of their SportsExtra.

'Gotta love those sports writers from Oklahoma. Charles Ward, Examiner.com's OU writer, isn't happy about their cupcake game with Idaho State but since the team needs six home games, the match-up is needed. Oh, and he calls our schedule slop.

Now, if OU loaded it's non-con plate with slop like this, Idaho State would be tough to justify. And it would be great to think of a better way to pay for an athletic department than scheduling a fundraiser with the football equivalent of Joe Piscopo as a headliner.

ESPN put out the final installment of their prestige rankings. You probably know who came in at No. 1. Ivan Maisel looks at the state's history and how football has played a role in their collective psyche.

It was one of Boren's predecessors, George Lynn Cross, who set in motion the monster that stands astride college football today. The state of Oklahoma barely survived the 1930s, when the Depression and the Dust Bowl sucked the life out of the Oklahoma soil and the pride from Sooners bones.

The university hit on football as a way to make Oklahomans feel good about themselves. Little did anyone know when Bob Stoops won his 100th game this past September, he made Oklahoma the first school to have four coaches who won at least 100 games in the same program. Bennie Owen put the school on the map in the early part of the 20th century. Since World War II, Bud Wilkinson, Barry Switzer and Stoops each have won 100 games and at least one national championship.

Kennedy has been mentioned for two positions: Hillary Clinton’s New York Senate seat and diplomat to the Court of St. James, which is ambassador to the United Kingdom.

Kennedy seems a quality choice for St. James Palace, which is a far less controversial appointment than the Senate.

But if JFK’s daughter had been sent to Capitol Hill, who might have been the next-most likely choice for London?

How about David Boren? The OU president was a Rhodes Scholar, remember, and there are worse assignments than ambassador to Merry Old England.

Looking for any excuse to get out of Oklahoma? Tramel wants the Sooners to become Dallas regulars.

Bob Stoops called former Miami University quarterback Robert Marve. So it seems the Sooners are just one more school for Marve to consider.

This could be the BCS. The best argument against a BCS playoff is a devalued regular season. SI's Stewart Mandel sees the NFL's Arizona Cardinals as the embodiment of everything wrong with a playoff system.

On Thursday lawmakers in Congress voted on a resolution commending the University of Florida for their national championship. Representatives from Texas and Utah voted against the resolution.

Texas Tech is raising their season ticket prices by $110 and fans aren't happy.

Minnesota coach Tim Brewster wants to get rid of his cupcake schedule and add a top BCS opponent every year.

College basketball programs are much more inclusive when it comes to hiring African-American head coaches.

Freshmen are not having the same impact on the college game as they did in 2007 and 2008.

The freshmen are, well, what freshmen traditionally have been — first-year players trying to figure things out at the college level and not playing like sure bets at the next.

Not that this rookie downturn was unexpected.

"You could see this coming two or three years ago," ESPN analyst Fran Fraschilla said. "We had an extraordinary couple of years. Now, with a few exceptions, there aren’t many impact players."

Check out a Facebook page of a four- or five-star recruit - especially those who have not yet committed - and you will find dozens of wall postings from fans trying to sway their decision.