A rarity for high school receivers, Timmons displays a level of polish that few others can match, particularly for larger receivers, who often struggle with running precise routes. He catches the ball away from his body ($) with his hands, runs excellent, crisp routes, and isn't afraid of getting hit after catching a pass over the middle or in traffic, showing an ability to high-point the ball when draped by defenders. That route-running ability -- getting into and out of his breaks quickly -- allows him to get open on short or intermediate routes, a perfect fit for the current Longhorn offense.

While Timmons isn't known for his top-end speed or getting open down the field, he does possess the suddenness to make defenders miss in the open field, while his size and balance make the task of tackling him even more difficult, as Timmons consistently shows the ability to run through ankle tackles. 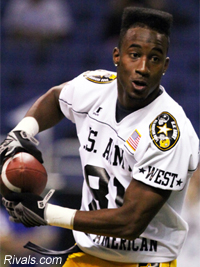 In addition to his abilities as a route runner, Timmons also uses his hands well at the line of scrimmage to fight off defensive backs trying to press him, a skill aided by his strength and size. That physicality at the line of scrimmage likely results from his work at tight end in middle school and early in high school, leading Timmons to talk about how much he likes to block ($).

Timmons also had an impressive performance in the week of practice leading up to the US Army All-American game, surprising observers with his polish and ability to catch the ball in traffic, earning the designation of the best wide receiver ($) for either team. That wasn't hyperbole, as Timmons earned that respect by beating the best cornerback ($) in the nation. That translated to the West scrimmage ($) during the week, during which Timmons caught three touchdown passes, including a difficult catch in the end zone with defenders all around him.

As mentioned above, Timmons doesn't have the elite speed to convince observers that he is a true deep threat. Mitigating that assessment was his ability to get open deep down the field on one play in the US Army All-American game. Of course, that play raises other questions for Timmons, as he was unable to adjust to the underthrown ball and let it drop to the ground after it got into his body, raising questions about his ball skills, particularly on underthrown balls or balls thrown behind him.

To be fair to Timmons, he is known for his hands and that one play certainly doesn't define his ability to catch the football. The play in the game wasn't the only time that Timmons managed to get open down the field ($), as he demonstrated that same ability throughout the week of practice. Maybe his biggest weakness isn't really that much of a weakness at all.

Given his perceived limitations in terms of his ability to stretch the field vertically, the Longhorns will need to bring in a deep threat at receiver in 2010. Fortunately, there are several large, fast receivers who fit that bill. Therefore, the weaknesses of Timmons won't necessarily restrict what the Longhorns want to do offensively. In fact, with his ability to get open and use his body to shield defenders, Timmons projects as a possession receiver in the mold of a larger Quan Cosby, having a similar ability to make the first defender miss and pick up extra yards. Like Cosby, Timmons won't wow anyone with his speed, but he knows how to play the position with a maturity beyond his years, capable of converting tough third-down opportunities, with the potential to become a security blanket for his quarterback. All that being said, Timmons may be more of a vertical threat than generally given credit for, giving his defender a nice shoulder fake of the post route in the Army game to get himself wide open.

Unfortunately for Timmons, at least in regard to any chance at early playing time, Colt McCoy already has a security blanket in the form of Jordan Shipley. After Shipley graduates, however, Timmons should compete for serious playing time in his redshirt freshman or sophomore season, with James Kirkendoll projecting as the only other competition as a possession receiver. With the depth at the receiving position, redshirting makes a lot of sense for Timmons, but injuries or an impressive fall practice that vaults him past more experienced receivers on the depth chart could lead Timmons to find the field as a true freshman. If could be that Shipley's double-move ability puts him in a slightly different niche than Timmons, though Malcolm Williams will take over Cosby's old role, leaving Timmons to battle with Brandon Collins and James Kirkendoll for playing time. With his size and fit for the offense, Timmons could very well carve himself out a role with the Longhorns in 2009.