Share All sharing options for: Bevo's Daily Round Up 1.28.09

Congratulations to A.J. Abrams. Abrams matched the Big 12 record with his 338th career 3-pointer against Baylor. 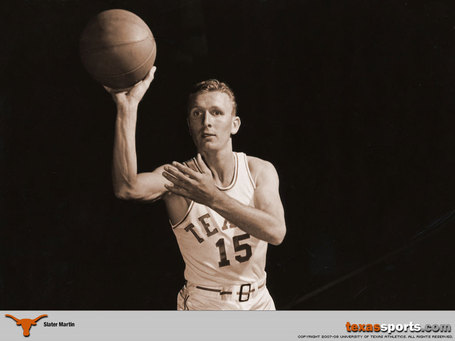 Longhorn great Slater Martin will have his number retired when the Horns play Kansas State on Saturday.

He went on to become a seven-time all-NBA player with the Minneapolis Lakers and St. Louis Hawks.

The Big 12 schools are having a hard time filling the seats.

Entering Monday's Oklahoma-Oklahoma State game, Big 12 teams had only sold out 17 of 142 home games. And Kansas accounted for 12 of those.

Kansas is getting better on the road.

But for a young team like the Jayhawks, it was essential for them to start having some success in hostile arenas — no matter who they played.

“I think when we had the road game at Colorado, we struggled here and there,” KU sophomore Cole Aldrich said. “It was a good road win for us because we really needed one.”

Tuesday was the 10th anniversary of the plane crash that took the lives of 10 people associated with the Oklahoma State basketball program.

The DFW I-20 corridor is a hotbed of gridiron talent.

Programs along the stretch continue to develop such a large quantity of talent that Cedar Hill coach Joey McGuire said, "You can win a national championship recruiting that area."

In the past two years, eight schools along I-20 have sent 86 players to college programs. During that time, Cedar Hill, DeSoto and Arlington Seguin have had eight recruits on the Star-Telegram State 100 list, six of whom signed with schools in the Big 12 or Southeastern Conference.

Finally, I went ahead and calculated all the points for each of the five major conferences. I’m not wasting time with the Big East or any other conferences because they are miles behind the five below. Also, shown is their average per team, not total points.

Keep in mind none of these conferences existed in the same form as far back as 1936. There are dozens of changes. So, this list below is not about the conference itself, but rather the components of the conference (teams). The prestige of the 12 schools in the Big 12 is what is being measured, not the Big 12 itself. After all, the Big 12 has only been in existence for a dozen years.


The Wiz of Odds is once again asking for votes for Cheap Shot of the Year. Two Big 12 players are up for the award plus the infamous Oklahoma State laser incident in the game against Colorado.

So what will Oklahoma State's Mike Gundy be doing next season?

It’s becoming less and less clear how Mike Gundy will manage his team in 2009.

A couple weeks ago, I asked Gundy if he thought he’d be calling plays again next year, and he said he wasn’t sure.

A few days later, offensive coordinator Gunter Brewer pulled his name out of contention for a job at Minnesota where he would have been the play-caller to stay at a place where he didn’t call plays.

And a few days after that came this quote from new defensive coodinator Bill Young when asked what he thought Gundy’s involvement with the defense would be: “He will be involved with the defense all week long. During games, he’ll be focused in on calling the offensive plays, but from Sunday until Saturday morning he’ll be involved defensively, too.”

The life of a recruit. ESPN The Magazine looks at so-called recruiting experts and what life is like for talented 17 and 18 year-old kids.

Dr. Saturday wants you to hug your friendly recruiting rankings. They actually mean something when you compare winning records with recruiting points.