Rating (Rivals): Four out of five (Five stars from Scout)

The hallmark of every great cornerback is recovery speed -- the ability to make up for a misstep or poor read on the play and still have the speed to impact the play. A perfect example was a play during the Army All-American game in which Davis was beaten, but had the speed to recover and break up the pass -- in fact the only throw that came in his direction during that game, a remarkable sign of consistency from Davis, absolutely crucial for cornerbacks.

Coaches love seeing potential recruits and commitments take part in summer mini-camps, because it pits top players against other top competition, the type of match ups that don't occur often in high school football. Davis didn't disappoint, as his name was the first coming off the lips of the wide receiver attendees, with Davis saying that he did not give up any big plays at all, a performance that would have been similar to his appearance in the Army game, in which he did not allow any receptions. 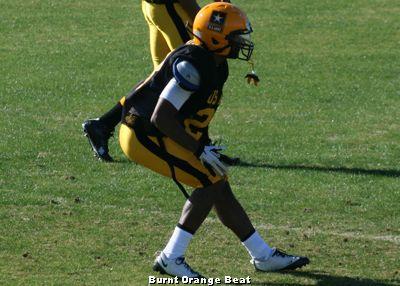 It wasn't a surprise that Davis allowed nothing during his time on the field during the game, since he and his West defensive back teammates dominated during the week of practice ($). Davis showed off his physical nature by crunching Patrick Patterson after he caught a hitch and knocking the ball free, an ability noticeably absent from the Longhorns secondary last season -- that of forcing turnovers. All week Davis made receivers pay for catching passes, a rarity for cornerbacks and a main reason recruiting services think so highly of him.

Davis has the size and skills to play safety, never more evident than in his ability to provide support in the running game ($), tackling with form reminiscent of Aaron Williams, wrapping up and driving his legs to finish the play. Further, Davis takes good angles when playing safety and does a good job of working his way through traffic.

Muschamp likes to blitz use his safeties and cornerbacks to blitz at times to keep quarterbacks guessing where the pressure will come from and Davis shows the ability to get to the quarterback and finish the play, recording four sacks as a senior, often finishing with big hits.

As a cornerback Davs is a little bit raw, but has great ball skills, able to attack the ball at its apex and maintain proper body position to properly track the ball. Where Davis really excels though is in zone coverage, where he can read and react to underneath routes and punish receivers for making catches.

There have been several players, like Patrick Nkwopara and Kenny Vaccaro, mentioned as possible special teams contributors early in their Texas careers, but Marcus Davis fits into a different category of special teams contributor. More than any other player in the class, Davis could be a dynamic return man for Texas with his rare blend of top-end speed and ability to reach that speed extremely quickly.

Since Davis excels in zone coverage, it stands to reason that jamming receivers at the line of scrimmage is not his strength, tough he was physical in the practices leading up to the Army game. With his relatively large frame for a cornerback, Davis should have the tools to learn the proper techniques at the college level and it's unclear why he struggled in high school to do so. The other aspect of his game that he struggles with is his ability to play man-to-man coverage, as those skills are still quite raw. That rawness manifests itself as a result of his questionable lateral quickness and flexibility, serious concerns for a cornerback who will likely be asked to play a lot of man defense in college. Davis also has issues with defending vertical routes, as his lack of flexibility keeps him from consistently sinking into his back pedal to turn and run with receivers.

It's difficult to overstate how important it is to have large cornerbacks. A lot of teams in the Big 12 like to run wide receivers screens, which means that cornerbacks have to be strong enough and willing enough to fight through blockers to make plays. With the size of Texas and good receiving prospects coming out of the state every matriculating (that's for you, BZ) at Big 12 schools, there are physically dominate receivers like Dez Bryan, Michael Crabtree, and Dezmon Briscoe in the league every year.

In addition to needing cornerbacks to match up physically with large receivers, the members of the secondary are the last line of defense against large running backs steaming into and through the second level. The difference between Deon Beasley being back there or Aaron Williams being back there could well be the difference between six points and a touchdown-saving tackle.

With Ryan Palmer leaving an open spot in the cornerback rotation and Davis the only corner in the class, he should see playing time as a nickel or dime back his freshman year. How much playing time he receivers depends on his ability to pick up on the nuances of playing the position that he currently lacks, as the Longhorn coaching staff hasn't shown the ability to teach zone techniques, even though guys like Davis and Eryon Barnett excel in zone coverage.

His playing time may also depend on how far into the doghouse Deon Beasley descends, since Davis is larger and more physical in the running game. It may be that Beasley has slid much further in the minds of Longhorn fans than he actually has with the coaches. Perhaps the best comparison for Davis is Aaron Williams, another large, highly-rated and form-tackling cornerback who played in some nickel situations as a freshman. Expect a similar trajectory for Davis, aided by his early enrollment and ability to participate in spring practice.