With the possible exception of Thomas Ashcraft, who is still quite athletic for his build, each of the offensive lineman committed to Texas in 2009 is extremely athletic. Porter is no exception, with excellent feet for his size. That athleticism makes Porter versatile -- able to play inside at guard or outside at tackle and able to drive and reach block, while also trapping well and moving in space to attack defenders in the second level and lead the convoy down the field on screens. Porter maintains that athleticism by working to put on the right kind of weight ($) -- muscle, not fat. Remember, the idea here is to physically shape lineman after they get to Texas, not re-shape them.

His combination of size, agility, quickness, and long arms also helps in pass protection, where he moves his feet well and has the flexibility to settle into the proper position, areas in which he worked hard to improve. Saying that he's a good pass protector is an understatement -- Rivals ranked him ($) as the best pass protector in the country last summer, though a rising prospect like DJ Fluker may have passed him since then. Still, the accolade speaks for itself. As with his run blocking, Porter uses his hands reasonably well, but has room for improvement. 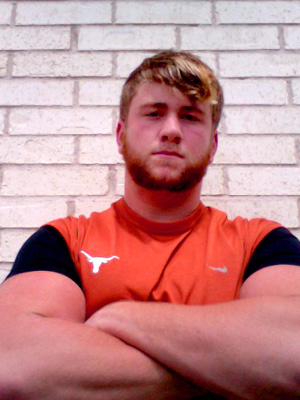 Porter had a chance to show off his skills at the US Army All-American game early this month and performed well, using his superb footwork and mobility ($) to excel in one-on-one drills in practice at guard and tackle. During the game, Porter made himself essentially invisible, meaning he didn't get beat on any pass plays and performed solidly, if not spectacularly, with his second level-blocking when called upon. His performance stood in stark contrast to the highler-rated Fluker, who had serious struggles in the game -- none of the West quarterbacks "protected" by Fluker are going to line up to have him block for them again. Unless they're masochists, which doesn't seem like a successful attribute for quarterbacks.

In a final assessment of Porter's strengths, it becomes apparent that Porter has a rare blend of athleticism, versatility, and well-developed technique honed through sound coaching, self-awareness, and hard work that will put him in a position to make significant contributions on the offensive line at Texas, though they might not be immediate.

The offensive lineman version of poor pad level is their ability to use their hands. Good offensive lineman deliver a strong punch to the defender to knock them off their course and balance. It's not that Porter is incapable of doing it, as he deals with stunting, twisting, and slanting defenders well, it's just that his punch needs to pack more power and occur more consistently

Porter was generally good in the week of practice leading up the to Army game, but he did struggle occasionally with the speed rushers ($) coming off the edge. That didn't show up in the game, so it's hard to say it's much of a concern. Really, there isn't much to dislike about Porter, as befits a recruit of his caliber.

One of the major criticisms surrounding the running game at Texas, besides perhaps the pure scheme of it, is the schizophrenic nature of recruiting at the position. Some members of the line are maulers and some members work better in space and reach block well. What makes the 2009 lineman class so special is that each one of the lineman is versatile enough to succeed in whatever blocking scheme the Longhorns decide to employ, even Ashcraft and his doughy lower body. Obviously, Garrett Porter figures prominently in that equation and the Texas coaching staff deserves significant credit to get a group of lineman with a cohesive vision. There are no questions about Porter's ability to function in the current Texas running and blocking schemes, but he and the rest of the lineman also provide the coaches with schematic flexibility across multiple positions for the future.

With an opening or two in the guard rotation, that's the position at which Walters, Ashcraft, and Porter will compete for playing time in '09, with Walters having a shot at center. Though Porter has the skill set to remain outside, he also has the ability to play inside at guard as the tackle rotation is essentially set. Since Buck Burnette is an idiot, Cedric Dockery is gone, and Chris Hall is probably the weakest link on the offensive line, there is a slight chance that Porter could play in 2009, but might be better served by redshirting a year. Ashcraft has more experience at guard and Walters can play both center and guard, so Porter could find himself on the outside looking in and redshirt. Adam Ulatoski will graduate after the coming season and Kyle Hix the year after, with the backups at both positions heading into their junior years. With a redshirt year for Porter, that puts his best opportunity to start outside in 2011, when he and Walter should be in position to take over the starting tackle roles. However, it would surprising if Porter didn't see the field at least in 2010 in the guard rotation.