On the Road to Scottsdale: Day 2

Share All sharing options for: On the Road to Scottsdale: Day 2

Day 2 didn't begin with nearly the same efficiency as Day 1.  Yesterday I woke up at 5:30, brushed the teeth, threw the girlfriend and her bags into the car, complained that no one had taken the back seats out before piling all of their crap on them, hit the ignition and we were almost to San Antonio by the time the girlfriend re-awoke.  That's efficiency.  Today began two and a half hours after the girlfriend turned off my alarm because I didn't notice it first.  We had a nice Mexican breakfast of huevos rancheros for me and chicken and bean nachos for her at about noon before finally crossing the border into New Mexico at light-speed.

Once we noticed that we had crossed the border (When the mile markers jumped to 160-something.  New Mexico had no welcome sign unless you count the "Speeding fines double, Safety Zone" signs that accompanied us all the way to Las Cruces.), light-speed immediately gave way to one mile an hour over the speed limit.  I figured cosine error would give me that one mph back and keep the taxmen police off my back.  Double speeding fines for what?  To keep people from careening off of the highway trying to avoid the swarms of police?  That was the straightest, smoothest piece of highway we'd seen since we left Houston.  The speed limit could have comfortably been 100, but New Mexico has decided that rather than an insincere "Welcome to New Mexico, Drive Fast and Keep Your Head Down!" sign, the best way to show their appreciation for our tourism is with a personal thank you card from one of New Mexico's finest.  I didn't get a ticket this time because of my cunning strategy of driving the speed limit, but I was still lucky to avoid one of the 75 to 35 with a cop waiting at the sign speed traps by staying mostly on I-10.  Anyone who has yet to get to NM, be careful. 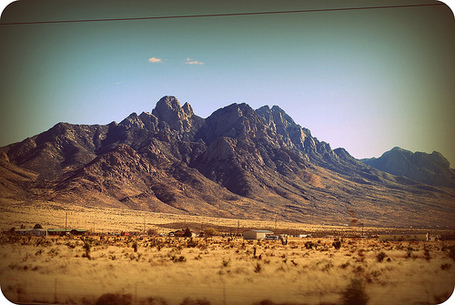 Since we were six hours from Phoenix with two days to go, we took a detour to White Sands National Monument for some photo ops.  It was surprisingly not disappointing for a New Mexico destination, and actually very cool, much like the Sugar Bowl the night before.  As I finalized yesterday's post, I was constantly tempted to comment on the Utah School of Butt-Whoopin's tremendous performance, but I had to leave it for today.  Alabama finally showed why they barely made a bowl game last year, and that they played an absurdly easy schedule considering they play in the supposedly greatest conference in the land.  Utah, on the other hand, showed that the Mountain West had some serious teeth this year.  They beat Oregon State, TCU, and BYU, a trio of wins that Alabama didn't match during their season, and now they have a victory over a 12-win Crimson Tide.  Oh, and did I mention that they're the only undefeated team in the FBS?  Utah has a legitimate argument to be #1 this year, over either of the BCS CG participants.  You can disagree with it, but you can't dismiss it.  If Texas and OU both win, then you've got three schools with real claims to the title.  THREE!  The BCS was supposed to fix this!

White Sands was very cool, and we ended up spending the whole day there-leaving just before sundown on our way to Tucson for the night.  This has been the worst decision of the trip so far.  I was so frustrated driving in the darkness as I could see shadows of mountains and canyons fly by almost invisibly.  I still have no idea what it's going to look like when I open the curtains tomorrow.  I even drove through a place called "Texas Canyon" which I would have loved to mock if I had only seen it.  Shameful.  The worst part is that I have no Arizona pictures to show you.  Instead, you'll have to live with more White Sands photos: 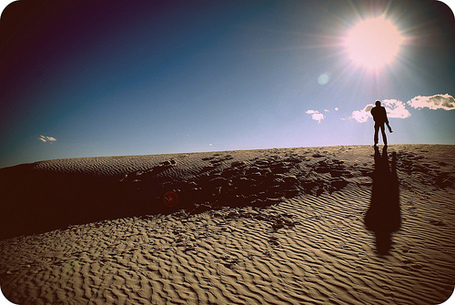 Quantum of Solace, only I'm packing a tripod.

When we finally pulled into Tucson late tonight, we were starved.  I had been thinking about Troy Smith showing up fat to the 2006 title game in Scottsdale which reminded me that In-and-Out Burger has locations in Arizona.  I've never had one, and I'm not 40, so I figured my heart could take it, especially since everyone kept telling me it was the GBOAT.  I ordered a Double-Double just like I like all my burgers (everything but tomatoes), fries and a vanilla shake.  Wow.  Was that ever a letdown.  Fries were good but nothing special.  Just regular fries.  Shake was pretty good, I thought, a little thick, but with plenty of vanilla flavor, buttery and savory is the best way I can describe it.  The burger was a total downer.  It came half-wrapped, which got me all excited, but then it tasted like a poor-man's P-Terry's.  P-Terry's is that burger stand basically on the corner of Lamar and Barton Springs that prides itself on using food that you would buy to make your burger.  Heinz Ketchup, fresh lettuce, good beef, etc.  The best part is that they pepper their patties a little, giving a little extra subtle flavor that really makes the burger special.  In-and-Out was like this, but without the pepper, and with a big chunk of white lettuce.  Patty and buns were fine, but they did nothing to deserve the adoration that I've been bathed in every time I try to talk about what I think is the best burger.  In-and-Out is a product of socialization.  The place is incredibly popular because it's not everywhere, it's not McDonald's, and it's pretty ok.  I will no longer be entertaining any mention of In-and-Out in my future discussions of best burgers. 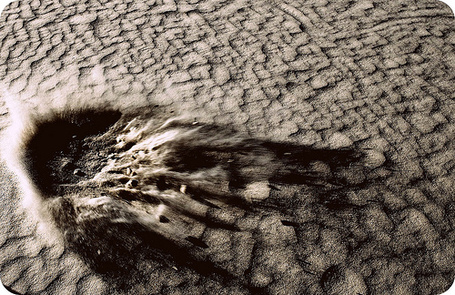 The burger disappointment obviously lends itself to a segue into a trend we've seen in yesterday's biggest bowl games.  ‘Bama and Tech had been so built up to be such great teams because they were supposed to be at this point.  ‘Bama was good because they'd crushed Clemson and Georgia, both Top 10 teams at the time.  No one second guessed their ranking of the Tide when those teams turned out to be awful, and Alabama sat at number one after playing possibly the weakest schedule ever by an SEC team before losing to Florida.  Still, a loss in the SEC championship game was more than ‘Bama hoped for after last season, but they weren't thinking about that, and found themselves being clobbered by Utah.  Tech gets a miracle last-second play to beat Texas despite being spotted a full half of play, then plays a good game again OSU and proceeds to take a big, curly dump in its next three games.  That's called disappointment, folks, and it can happen to us too, if we don't focus on Brutus, Laurinaitis, and Wool-Chest the Terrible.  All of our campaigning and arguments will mean jack if we can't slap around a 10-2 team from the Big Ten. 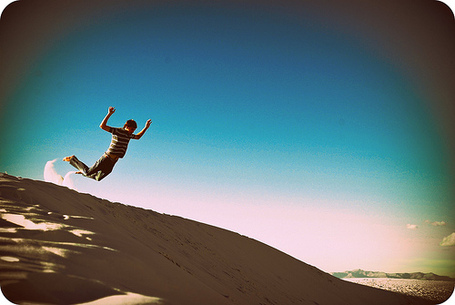 I assure you, this ends badly

Will Mack have us ready this year as he did last year?  I haven't heard anything about how mean he's supposedly been, but I do have insider information that Muschamp is still coaching the defense, and that's got to mean something.  Reading the Bevo Beat on the Statesman is distressing somewhat, as you'll get reports of us going to watch Kansas play Minnesota or a Suns game (did we go to a Suns game?  I seem to remember hearing about that.).  That doesn't mean anything certain, of course, but we surely hope that Mack and Will are slapping them around a little bit in practice.  "Them" includes Greg, btw.

So that's Day 2.  I'm sitting in tonight's motel trying to ignore someone on "Showbiz Tonight" telling me that their top 5 A-listers over 40 are "truly an inspiration," while I set my alarm to something really, really loud and annoying.  I'm not sure what tomorrow's excursion will be yet, but tonight's entertainment will be trying to jam the door with these stubby hotel chairs since we had police cars and a helicopter shining spotlights on a bunch of cargo containers strewn about the lot behind our motel.  Real prayers, tonight.