I'll probably bump this up front and center again early next week, since the weekend's live action will shove this down the page pretty quickly. But the post is done, so if you're here and reading it, dive in to the fun.

With the exception of our look at Sergio Kindle's speed rush, the Snap Shots series primarily has focused on the offense. Today, we spend a few minutes with the defense, and in particular the unit's work against the screen. What follows is a frame-by-frame breakdown of Texas' exceptional work disrupting an attempted screen during the first quarter of the UTEP game. The Miners may have been outmatched in this contest one way or another, but this particular play neatly illustrates a host of broadly applicable points about this year's defensive unit.

THE CONTEXT: It's 3rd and 10 for the Miners, who line up in a look the Longhorns will see many, many times this season: shotgun with aces spread wide, a tailback alongside the QB.

TEXAS' DEFENSIVE SET: Texas is in its base nickel package, the alignment of which is telling about how Muschamp wants to defend the spread passing attacks we'll often see. First, note the alignment of the secondary: the corners Curtis and Chykie Brown are in soft-press coverage, the nickelback Aaron Williams is up on the line pressed over the strongside slot receiver, Earl Thomas is eight yards deep over the weakside slot, and Gideon is twelve yards deep behind Chykie and Williams.

Rod Muckelroy and Keenan Robinson are your LBs, Eddie Jones and Sergio Kindle are upright on the ends, while Sam Acho slides inside to flank Lamarr Houston on the interior. You'd have to sub Christian Scott for Gideon to get a faster, more athletic group of 11.

If you're wondering why you should care about this, please recall, first of all, that Chizik, Akina, and McDuff were defending these offensive sets from the 4-3; but second, it's also worth looking at how Muschamp and this young-a-year-ago defense have matured. It's not difficult to see how nicely Texas is aligned pre-snap to handle this set, and we could spend an entire post talking about the niceties of the alignment and personnel alone. 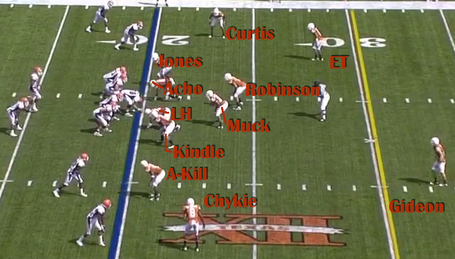 At the snap: As Vittatoe receives the snap, Texas brings five rushers towards the line -- tackles Houston and Acho strike to engage on the inside, while the highlighted trio of Kindle, Muckelroy, and Robinson move forward. Note, however, Eddie Jones, shaded in the picture below: he's most likely sitting in a read (taking away the quick pass to the weakside slot) or, possibly, simply disinterested in rushing based on something he sees. 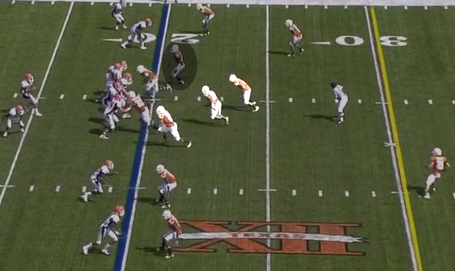 Reading the D: As UTEP's interior receivers start downfield, two potential screen receipients run strongside (green lines below). The observation here is centered on Texas' defensive ends: Sergio Kindle has properly altered his rush to account for the tailback sliding outside while Eddie Jones continues to hold his ground unengaged, watching Vittatoe for his cue. 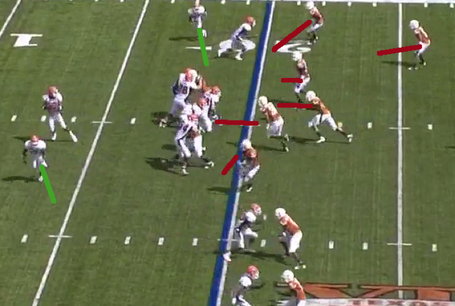 The match up: It's easy to see from the frame below what factors will control the outcome of the play. As Vittatoe starts to pass the bubble screen, UTEP's left guard (shaded) has what looks like a good line on Eddie Jones, who is making his initial step towards the play as he sees what's coming. Note that if a second from now UTEP's left guard successfully engages Eddie Jones, there's a nice gap in the middle of the field, thanks to a nice seal block from the center on Keenan Robinson (just inside the left hashes). 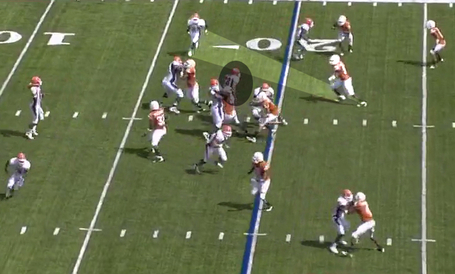 Heads up: As the ball is released, UTEP still looks to be in good position to make a solid gain out of this: the left guard has what looks like a good angle towards Jones, Acho (shaded) is engaged with a blocker, and Robinson is sealed inside by the center. Look closely, however, at the shaded area (might be helpful to click the image to enlarge): If you peer in close, you can see a small, but crucial detail: Acho has both kept his head up (eyes on the QB) and used his arms to keep separated from the back-pedalling, upright left tackle. 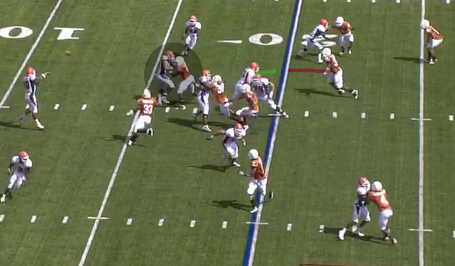 Zooming in: A fraction of a second later, you can start to see why this screen is going to fail. At the left of the image the shaded Sam Acho, eyes on the ball, is disengaging from the left tackle, while Eddie Jones (shaded near the 20 yard line) has begun his close on the play with a quickness that -- in a mere split second -- has turned what looked like a good angle for the left guard a not-so-hot one. 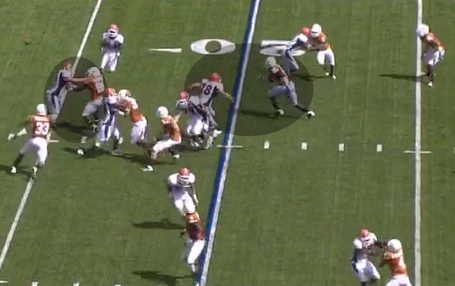 Ball arrival: As the ball arives, Acho is disengaged and lurching towards the receiver, while Eddie Jones is racing past what is now an out-of-position left guard for the Miners. 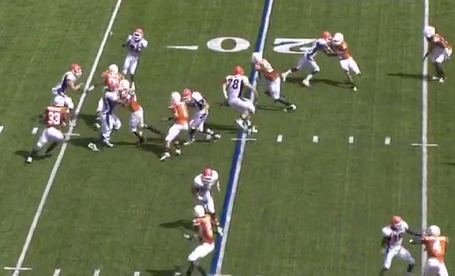 Might as well drop it: The UTEP receiver drops the screen pass, in all likelihood because he can't help but notice that Sam Acho and Eddie Jones are about to crush him at the same time. 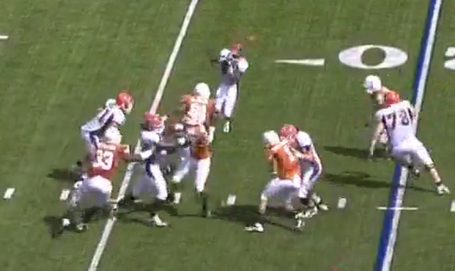 Fail: What looked like a promising play at the outset turns out to be a painful incompletion, thanks to Acho and Jones's discipline and athleticism. 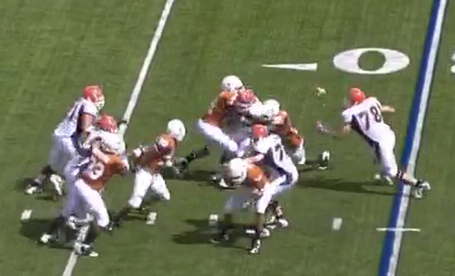 The lesson:  Texas is defending the screen game exceptionally well so far in 2009, in a way that highlights a bevy of important points: