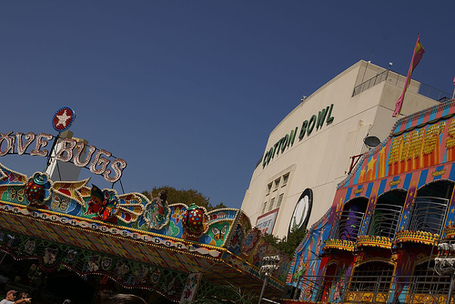 It's that time of year. Let the hate begin.

So much has happened since Texas' 45-35 victory last October.

For those with short memories, here are the highlights: the three-way Big 12 tie, the politicking, the Texas flyover, the BCS-decided tiebreaker, Bradford's Heisman win over McCoy, Texas' victory in the Tostitos Fiesta Bowl, Oklahoma's loss in the BCS title game, the asterisk on the Texas meeting room wall and Bradford's sprained right shoulder.

The big question is whether all the grudges of the past year are still front-burner issues, considering the stakes for Texas and the adversity suffered by Oklahoma.

I guess we owe Colorado a thank you note.

“It was a tough game and a physical game and one we really needed going into next week,” Texas coach Mack Brown said.

After the Colorado game, at least they still consider Texas in the elite three.

They've separated themselves. Six weeks into the college season, and Florida, Alabama and Texas are clearly the elite.

Everyone else is just chasing and hoping.
"It's like climbing a mountain," Alabama coach Nick said. "The higher you get, the more treacherous it gets."

Colt McCoy was on the Dan Patrick Show.

For more on the Colorado game, see Sunday's BDR. Barking Carnival has an entertaining look at the game with the Buffs.

The Aggies lost to Oklahoma State 36-31.

Oklahoma State rode the powerful legs of Keith Toston and the right arm and will of Zac Robinson to a 36-31 victory Saturday in the Big 12 opener for both teams.

They didn't want a moral victory.

Sherman's expressions and words after the game let it be known the "moral victory" step is one the Aggies expected to bypass. He truly believed A&M could defeat 15th-ranked OSU, defend home turf and move on to the next responsibility.

Safety Trent Hunter, only a sophomore, has become a spokesperson of sorts for the defense if not the team as a whole, and it was quite clear that this Big 12 loss hurt more than any of those that were by an average of 25 points in 2008.

His defensive coordinator, Joe Kines, was quick and succinct in conveying that disappointment.

"The thing that hurts on this one is we went into the game expecting to win, not because of circumstances (OSU wide receiver Dez Bryant's suspension and running back Kendall Hunter's injury) but because of how we worked," Kines said. "The difference in the team now is we react to situations like a team is supposed to react, nobody is supposed to be happy or think its all right and they didn't think it was all right. They thought we should pull it off."

Usually rainy days and Mondays get us down.

The big news? Sam Bradford is back. The Sooners beat Baylor, but you know what is on everyone's mind...

That answer, 33-7, tied into the paramount issues. How healthy is Sam Bradford, and did the Sooners refine themselves enough to beat Texas a week hence?

Those answers? Slingin’ Sam’s shoulder is fine, thank you, which gives us the answer to the Texas query. Maybe, just maybe.

The first-half Sooners, who couldn’t run or catch, would have little chance against the Longhorns.

The second-half Sooners, who grew fangs on both sides of the ball and rubbed super glue on their fingers, most definitely could spear the Steers.

"If we come out and play the way we did in the second half, we have a great chance to put ourselves in position to win,” said OU defensive end Jeremy Beal. "We can’t beat Texas the way we played in the first half.”

Bradford has some new friends.

Brandon Caleb led the way for the Oklahoma receivers with seven catches for 139 yards, who helped the Heisman winner throw for the eighth-most yards in school history.

Caleb provided the most electrifying play of the day, breaking a tackle and cutting across the field to turn a 10-yard completion into a 49-yarder.

"I love the energy they played with today," Bradford said of his receivers. "I thought they played great."

High praise from a Sooner. Gerald McCoy thinks Texas might be pretty good.

"We played well, but there was a lot of little things we gave up that we have to be better at if we're going to beat a team the caliber of Texas." — defensive tackle Gerald McCoy

Two players were injured in the Baylor game.

OU offensive lineman Brian Simmons and safety Quinton Carter both suffered knee injuries that sent them to the bench. Coach Bob Stoops said he didn't have any information on the severity of either injury.

Do we really care about the Pokes this week?

Oklahoma State's All-American running back might want to get back from his injured ankle as soon as possible.

Because Keith Toston is getting the job done.

Toston accounted for 204 all-purpose yards including 130 rushing yards as he helped catapult the Cowboys to a 36-31 win over Texas A&M at Kyle Field on Saturday.

Deion Sanders' agent was not present when Dez Bryant was at his house.

Here's the Big 12 weekend wrap up.

Kansas beat Iowa State 41-36, but the Cyclones aren't too upset.

Someone going by the name cyclone1 summed up the feeling of players hanging around outside Iowa State’s locker room late Saturday afternoon.

“Let’s be honest here,” this person wrote on The Register’s web site after Saturday’s 41-36 loss against 16th-ranked Kansas. “If the Cyclones play like this the rest of the year, I see at least 6-6 ... ”

Players from the 3-3 team shared that optimism.

Mark Mangino did not like the Jayhawks' defensive play.

The offense is historically good. Quarterback Todd Reesing will set records that are unlikely to be approached for a long time. His favorite wide receivers, seniors Dezmon Briscoe and Kerry Meier, are setting records every game. Plus, the Jayhawks have a big freshman running back who is proving adept at just about every skill a team could want and an offensive that was so good in Saturday's 41-36 victory over Iowa State, Mangino said he had never seen better.

Then there's the defense. Iowa State, an improving team with a heady quarterback and a fast running back, piled up 512 yards against the Jayhawks. And Kansas still faces Oklahoma, Texas, Nebraska and Texas Tech."On the defensive side of the ball, it was not a pretty picture," Mangino said. "I want to give credit to Iowa State."

The Red Raiders devoured Kansas State 66-14. A quarterback controversy may be brewing.

Making his first collegiate start, Sheffield passed for 490 yards and threw seven touchdown passes to guide the Red Raiders to a 66-14 Big 12 conference victory over the Wildcats at Jones AT&T Stadium. With the win, Tech improves to 4-2 overall and 1-1 in conference play. Kansas State dropped to 3-3 and 1-1, respectively.

Sheffield started in place of Taylor Potts, who stood on the sidelines in street clothes after suffering a concussion last week against New Mexico. Asked after he completed 33 of 41 passes if he feels as though he has earned the starting job, Sheffield said: "In my eyes, yes. But that’s not my decision.

"It’s up to the coaches and we’ll see what coach [Mike] Leach says this next week and go from there."

“We’re fighters, and we’ve always known that,” Baylor defensive lineman Jason Lamb said. “We proved it today. The whole game was a big fight, and we made them work hard for everything, but we just didn’t finish.”

From the opening kickoff, there was a buzz in the crowd as Bradford made his first appearance since going down with a shoulder injury in the season opener against BYU. He hit 27 of 49 passes, but his numbers would have been more impressive if not for 11 dropped passes.

Our thoughts go out to the Raiders and cornerback Nathan Stone. Stone suffered a spinal injury against New Mexico and his football career may be over. This is one injury Mike Leach should address.

It looks as if senior cornerback Nathan Stone’s career is over, the result of a spinal injury he suffered in Saturday’s game against New Mexico, and Leach doesn’t acknowledge that. Here’s what he said Wednesday about Stone:

“Great player. Still part of our team. I think really a guy that has continued to elevate. He started from way back and worked his way into being a scholarship player. I think he’s really had an impressive career and has come a long way.”

No mention of what went on Saturday with Stone, a backup cornerback and special teams player. The way he got hurt, lowering his head and flipping a New Mexico return man, looked frighteningly familiar for football fans who have seen players suffer life-changing paralysis that way. Stone took a knee or thigh to the helmet and dropped, face forward and motionless, to the turf.

High school players are bigger than ever before, but not necessarily healthier.

Once a rarity, teenaged mega-players have become a common sight under the Friday night lights. "If you were to weigh the lines of high school football teams, they're significantly higher in recent years," said Brian Carr, a physical therapist and trainer at Georgetown High School. "Compared to just 15 years ago, there's a huge difference."

Doctors and trainers are reporting increases in certain injuries — stress-related muscle and ligament tears, knee strains and foot fractures — that can be directly attributed to the strains placed on developing bodies by extra bulk. Weight-related medical problems are also beginning to crop up among the giant teenagers.

A good reason to hate Oklahoma...

A tornado outside of beautiful Oklahoma City.

Oklahoma is Hell On Earth. AskMen.com ranks Oklahoma City #5 as a city the world should just forget.