In the Trenches - System Failure or Sphinctered Heads?

Share All sharing options for: In the Trenches - System Failure or Sphinctered Heads?

After reading over 100 comments in PB's postgame react and completely reactionary articles such as this one, the fanbase is screaming for an explanation about why Texas rushed for 46 yards on 25 carries while Toledo rushed for over 300. Our very own dimecoverage, in response to a comment in her postgame Daily Roundup responded:

My mother would like our o-line to get their s&%$ together.

So what was the deal? Is it evidence of a soon-to-be-fatal weakness, a warning klaxon for a complete system failure? 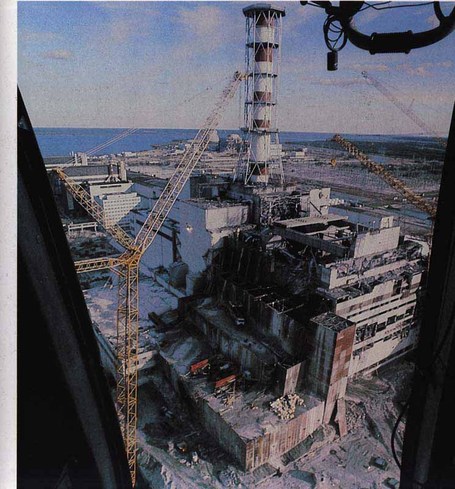 via www.stsci.edu Reactor meltdown at Chernobyl. A metaphor for the Texas running game?

Or is it a case of hubris and overconfidence, causing the players to play like they had their head firmly inserted into a sunless area 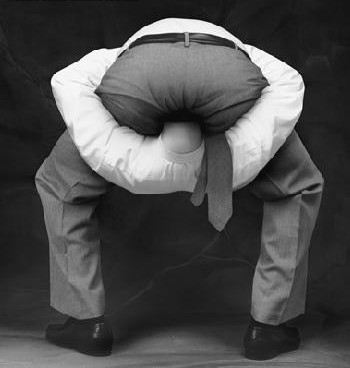 via 4.bp.blogspot.com - The Extra Blocking Surface? Anyone? Anyone?

In this week's rendition of In the Trenches I'll explore these and other questions. But here's a hint : hold off just yet on reaching for that morning cocktail, the Vallium, or even the Tylenol.

"And the shuttle Atlantis has just exploded over the Atlantic ocean...."

Let's first entertain that the sky is truly falling and that the Horns' woeful performance is indicative of impending system failure. What would be the evidence?

#1. The running game has been a worry since VY left.

#3. Texas has three running plays: the zone read, inside zone handoff, the speed option, and the spread counter (the sorta-counter). Even a Pop Warner team has more running plays than that.

#4. Texas is averaging less than 6 designed QB runs from scrimmage per game in a spread offense that only functions properly when the QB is a threat to run. Keep in mind that this is NOT the Texas Tech offense, which uses draws and traps to punish defenders that drop LB's too quickly and rush the passer too fervently. Texas' running offense is designed to run the ball on first down when the defense EXPECTS the offense to run.

Logical Conclusion: This is a scheme that wastes plays running and results in lots of third and long situations, with back-breaking sacks (2 by Colorado, including a fumble) and interceptions (averaging more than 1 per game). Against a highly talented front seven of OU, frustration and disaster are imminent.

Where the Sun Doesn't Shine

And now let's consider the alternative, that Texas was flat, uninterested, and basically did not have their head in the game for this week only.

#1 Colorado was the first team Texas has played this year to run multiple, sophisticated run blitzes. This created considerable confusion at times among the offensive linemen, who seem to have forgotten that they saw lots of these blitzes last year, and at the least created 7 defenders against 5 blockers on virtually every running play.

#2. The playcalling seemed to suggest that the Horns treated the game like a scrimmage, in which the assumption was that plays would succeed as long as they were executed properly. Colorado' attacked every play like they had heard it called in the offensive huddle.

#3. Several players had absolutely miserable games blocking in the running game: Greg Smith (aka the EBS), Chris Hall, Michael Huey, and Dan Buckner. We fans acknowledge that some of these players are poor on a weekly basis, but subpar games by Huey and Hall are a surprise. Buckner saw things from his flex position he's probably never seen before (more details below).

#4. Because of the relative novelty of having to read a lot of blitzes, Kirkendoll and Chiles weren't always on the same page as McCoy, resulting in broken routes and missed reads.

#5. Like it or not, words to the press notwithstanding, players (and coaches) were saving their intensity for OU.

Logical Conclusion: Put your money on the head-up-your-ass explanation. We forget that Newton was out, McGee was injured (ankle and then hurt his shoulder) and Cody Johnson is simply not a good zone runner (backcut and go is not his forte). I don't know why Hall and Huey struggled so much to pick up stunting and delayed blitzing linebackers -  the best explanation is that they just weren't prepared for the intensity, but it isn't easy to understand why they weren't. Up to this point in the season, most running plays have assumed that two defenders (one DE and one outside LB) can initially go unblocked, leaving 5 offensive linemen to block four areas at any time during the course of the play. 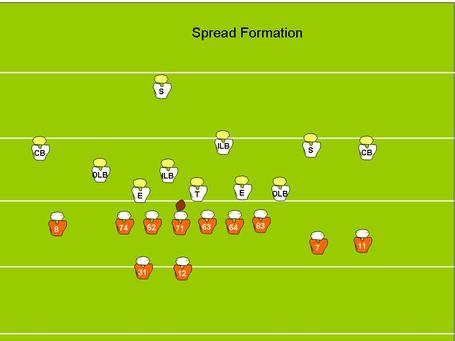 By blitzing in the interior gaps and doing a lot of stunting and twisting (where defenders cross behind others to attack different gaps in the line than they covered at the snap), the Buffs forced the Horns to have to block six areas. The zone blocking scheme used by Texas succeeds by getting a blocker under one of a defender's shoulders, pushing him aside and then leaving to block another defender. Against Colorado, blockers had to shift laterally and with poor leverage to block defenders coming from different directions, which is why they looked out-manned at times. 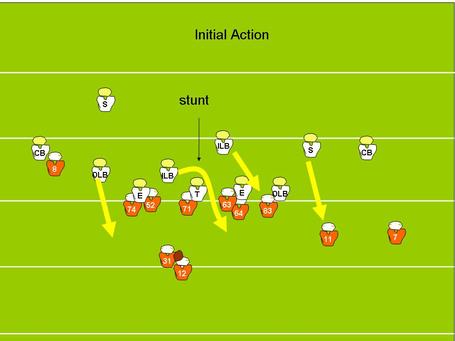 Note in this next diagram that Michael Huey and Greg Smith end up badly out of position because the defenders are past them before they fully release from their initial block. Note also that a poor block by Kirkendoll removes any outside escape. This leaves Cody Johnson with no place to go and not enough quickness to cut back behind Charlie Tanner (52). 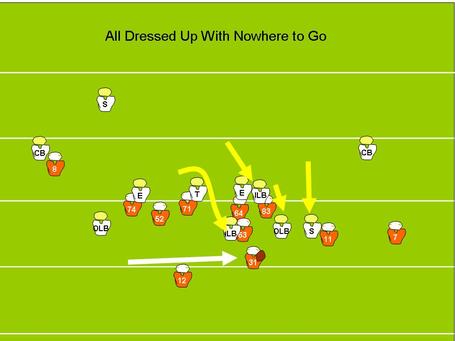 The final piece of the puzzle has to do blocking by the receivers. Without a true dual-threat tight end, the Horns have called on Dan Buckner to block out of his "flex" slot position. Against Tech and UTEP, for example, Buckner usually just had to chip the oustide linebacker before an offensive lineman would arrive to lay the wood. With the linemen preoccupied with other things, Buckner was in position to make several key blocks on the outside linebacker and largely whiffed. One play in particular, a little shovel pass to Whittaker in the first quarter, might have gone for 15 yards or farther except that Buckner missed his block. Dan knew this because after the play he looked the coaches and pointed to himself as if to say, "My bad."

One doesn't normally think of wide receivers as "in the trenches," but with as many bubble screens as the Horns throw, the wide receivers become key blockers in the offense. Wide receiver screens had a huge potential on Saturday night because the Buffs were attacking so strongly with their linebackers and a good initial block on the cornerback would have yielded a ton of open space. Kirkendoll has succeeded in the past by blocking defenders from the side and sort of nudging them outside. Colorado's strategy was to attack Kirkendoll, knock him down and then go make the play. This was an effective strategy all night against the Chiles screens and also effectively turned the zone read and speed option plays inside to the stunting linemen and linebackers.

A message: Mr. Buckner and Captain Kirk, nobody's going to beam you up or come to your rescue to save your glutes; you're going to have to man up and do your job next week.

The jury is still out on this dilemma of failed system with impending disaster vs. a one-game welcome back to the Big 12 punch in the face will depend on the coaches and players. Some key possible solutions.

1. Get creative with the weakside guard and let Colt run. More than any single other suggestion, this will help the overstuffing of the running lanes for the running back. If Colt is an actual threat to run, the outside linebacker on the weakside (the Will) has two gaps to cover. Colorado basically gambled that Colt would not run. Use either Hix (64) or Ulatoski (74) to engage the end and pull Tanner (or Huey (63) to kick out the outside linebacker if he attacks up field to cause Colt to "read" the DE and hand the ball off. If the linebacker attacks the 3 gap (between the tackle and guard). Colt can then either go inside or outside the tackle. Mind you, this requires the guard to read whether the LB is attacking him or pushing upfield outside the tackle. A couple of 10 yard runs by Colt, and the linebackers will have to stay home, allowing the running play to work as planned. 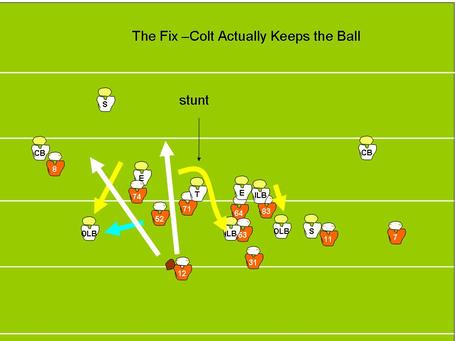 2. Recognize that Malcolm Williams is not, and never will be, a "practice player" but is one of your very best players - get him on the field. Particularly in the slot as a blocker for Chiles or Shipley on the screen. Send he and Buckner up the seams on deep curls or, gasp, flag patterns, hit a couple of those and get those linebackers out of the gaps. Pump fake the screen, fake the handoff, and then let Williams or Shipley run past the attacking DB and up the seam.

4. Get Whittaker in the game. He and Newton have the right one-cut quickness it takes to make the zone-blocking scheme work. Witness Whittaker's 12 yard touchdown in which he reversed field to wide open spaces on the backside of an initial zone stretch play to the left.

5. Let's see some reverses, middle screens and slants to the WR. Make the LB's pay for their aggressiveness.

A Final Word. None of this should be new to any football professional. My purpose here was to suggest for discussion some ideas about what when wrong and how to fix it. Here's to confidence that the game was nothing more than a punch in the mouth by the first attacking defense the Horns have seen this year and that next week, the Horns are prepared to slip the jab and land the uppercut.