There have been many words spent castigating Greg Davis, the offensive line, James Kirkendoll, Cody Johnson, Chris Jesse... pretty much everyone in the stadium except for Jordan Shipley and Colt McCoy. Most of it's fair, but I've now re-watched the game, and I regret to say that McCoy deserves some share of the blame. Below, the opening drive of the second half, directed by Bad Colt.

1st and 10: Texas is in its base 11-personnel, with Shipley split solo on the weakside at the top of the screen, Vondrell McGee at tailback alongside Colt. The Buffs are in their base 4-2-5, safeties 10 yards deep. As McCoy receives the snap, the linebackers are statues because, dude, why not? It's not like Texas is gonna run it. 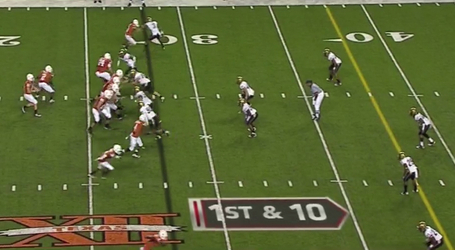 Checking his reads Shipley: As McCoy scans the situation, this is what he sees. Shipley is smothered by a triangulation of Buffaloes: press coverage from the corner, safety help over top, and a Will linebacker breaking towards the sideline.

Real teams run screens: Obviously, McCoy is still locked in on Shipley here, but this frame is presented to highlight a different point. Imagine for a moment we had a better offensive coordinator. He'd look at situations like this and conclude, "Gee, we could easily run some successful screens here." It's pretty easy to see what a good situation Texas would be in if LT Ulatoski (#74) and LG Tanner (just below him) released their blockers to McCoy. As Shipley dragged the corner and safety down the line, McGee (#2) would be wide open for the dump screen, with Ulatoski and Tanner paving the way in front, with only the linebacker to block. Sigh. 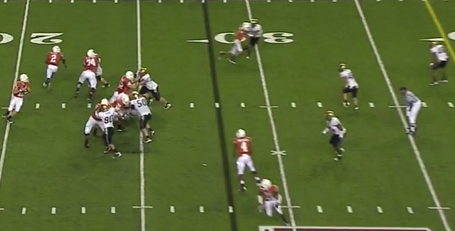 Still. Checking. Shipley.  C'mon Colt. For crying out loud, he's just not open. Can't get open. Smothered, like you like your hash browns at the Waffle House in Abilene. MOVE ON. 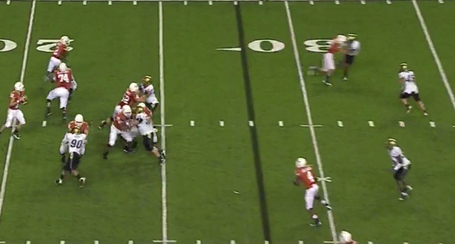 Lack of options: To be fair, McCoy's options on the other side of the field are miserable. Dan Buckner has "run" a... well, a nothing. He's standing at the line of scrimmage, threatening exactly no one. Not pictured at the bottom of the screen, Texas' other wide outs are comfortably covered by two corners with safety help. Why do they have safety help? Because Greg Davis has sent Buckner on a stand and watch route and can be covered by a linebacker. McCoy's best option was probably to swing it out to McGee in the flat, where he'd have a chance to make a linebacker miss. 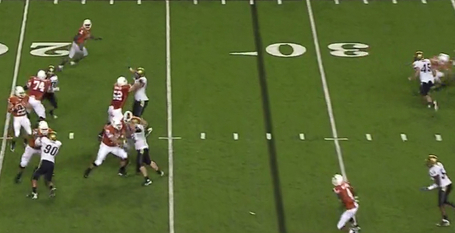 Completions are misleading: McCoy completed 33 of 39 passes on Saturday, but more than a few were like this one to Buckner -- good for nothing. This one's not so much a manifestation of Bad Colt as it is an example of the mediocrity of Davis's design in the passing game. 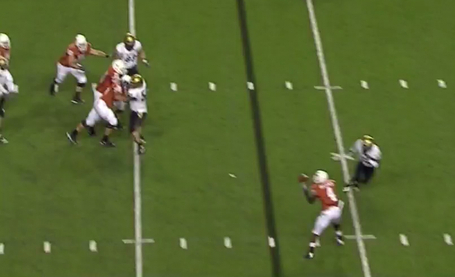 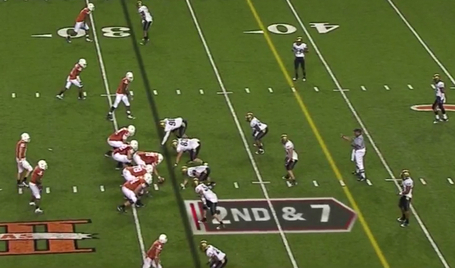 QB draw holler! As soon as Chris Hall snaps to McCoy you can see him start to release upfield. 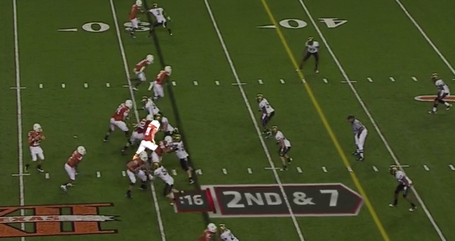 Hey, this looks promising: Looks pretty good at this point, don't it? If Hall can engage the linebacker, McCoy's just gotta dart through the nice hole between Tanner and Ulatoski and let his receivers wipe out the safety. 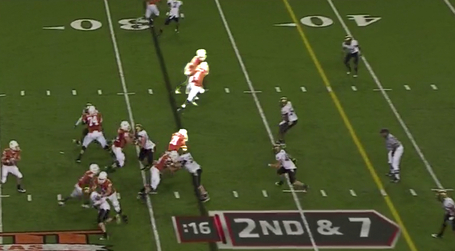 WRONG WAY! Colt! You're going the wrong way!!! I've highlighted where you need to go! Nooooooo! 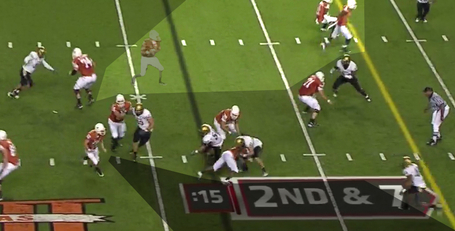 Army of white: No gain, Texas. 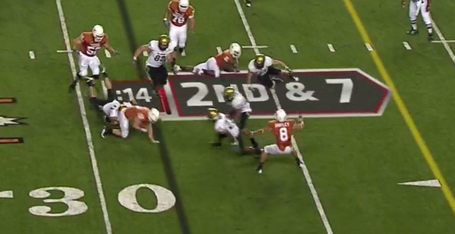 3rd and 6: Empty set with Fozzy Whittaker in as a fifth receiver at the very top of the screen, flanked by Kirkendoll and, upright on the line, Buckner. Shipley's in the near slot, with John Chiles split beneath him at the bottom of the screen. 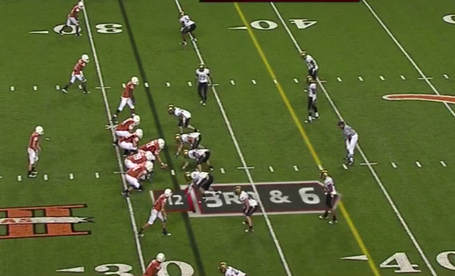 Bringing six: As McCoy receives the snap, Colorado sends the linebackers -- it's a max rush, with 6 guys headed at 5 blockers. Colt McCoy, senior Heisman candidate, has seen this many times and knows where the ball needs to go. Right? 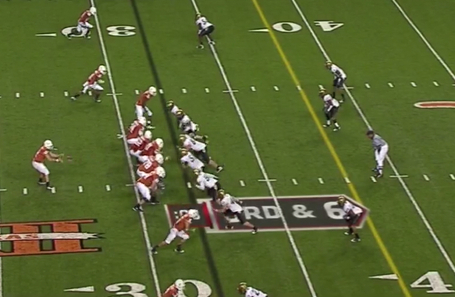 Maybe not: Christ almighty, Colt's looking to the near side, where his options are comparatively terrible considering the open space Texas is working with on the strongside of the play. 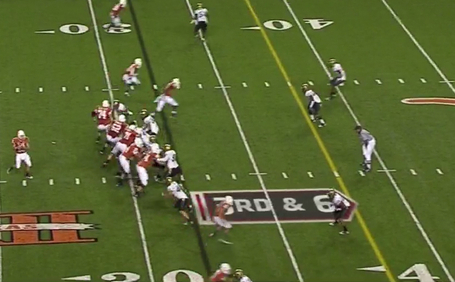 Locked in: Colt apparently made up his mind before the snap. He's looking to Chiles on a slant. Period. For all the complaining about the offensive line, they've given McCoy a beautiful pocket to take a moment to make a read here. He's not interested, though. 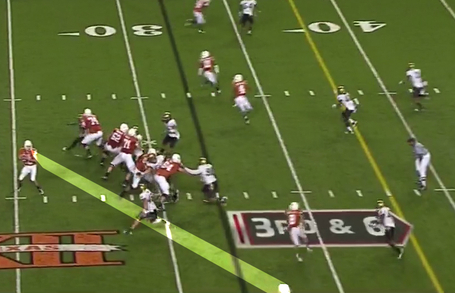 Gross: One other note as Colt releases the pass to Chiles -- check out the routes Kirkendoll and Buckner have been sent on. I hope one of them got it wrong... 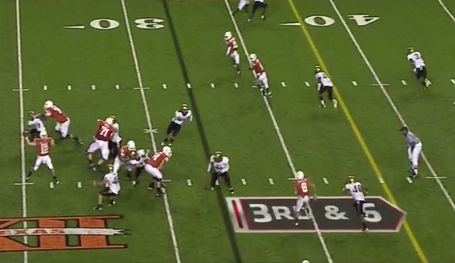 Behind the receiver: Nevermind the question of whether John Chiles is the guy you want throwing a slant to on 3rd and 6, even if he is McCoy's pass is crap -- well behind the well-covered Chiles. Incomplete and it's time to rugby punt it six yards down the field. 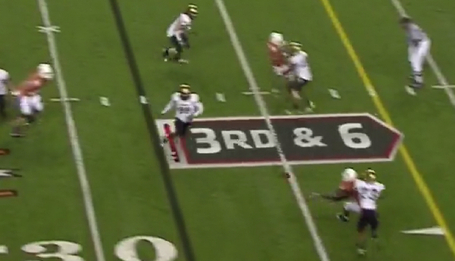