Share All sharing options for: The State of Oklahoma: Offensive Line Struggles with Right Tackle Comedians

When I was watching Oklahoma struggle against a Griffin-less, penalty-loving Baylor team for the better part of three quarters, I laughed and Iaughed.  I even started to feel a twinge of overconfidence, especially as pessimism grew among Sooner fans.  Whoops.  Laughed too soon.  Now both sides have had their bouts with doubt and worry after subpar performances against two of the Big 12's weakest teams (Baylor might have been decent with Griffin, to be fair).  I don't want to talk about our game against Colorado.

Luckily, I don't have to; I can just ignore our mistakes and focus on OU's struggles, which sure brightens my day.  This week, I'm going to discuss a few weaknesses in OU's team and possibly how to exploit them, so I will leave discussion on Okie State's game against A&M for later.  Unfortunately, I have a big research paper due on Thursday, but I will do my best to get content up leading up to the game.  I will also not limit myself to just their problems; surely their strengths are appropriate to acknowledge as well, but today, we'll look at a problem area.  And if one wants to talk about OU's weaknesses, what better place to start than at offensive line?

I rewatched both OU games against Miami and Baylor, and neither viewing improved my opinion on this Oklahoma line.  It's just not very good.  However, since much has already been said about the offensive line, I'll simply key in on the right tackle position, which has probably been the weakest area so far.  Jarvis Jones and Cory Brandon present a favorable matchup for the Longhorns, and it is something you know Muschamp has every intention of exploiting.  In this post, I'll focus on the game against the Hurricanes because their athletes are more similar to our own than Baylor's.

Jones and Brandon like to commit penalties, dive at opposing players' knees, and get burned around the corner.  Brandon lost his starting job after a horrible game against BYU, but Jones has not been that large of an upgrade. He basically makes the same mistakes Brandon does in less glaring a fashion and a bit less frequently.  Neither player (and arguably OU's entire line) can handle fast, athletic ends coming off the edge.  I noted several times where pressure came quickly through the right side against Miami, leading to drive-killing sacks, pressures, or penalties.  Run-blocking is better, but nothing to be impressed about. 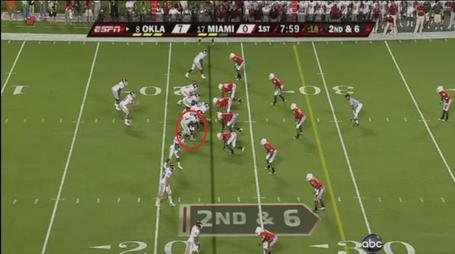 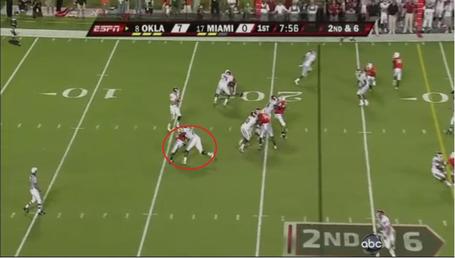 Uh... that looks bad.  Can he at least hold him?  Sooner lineman are always good at that. 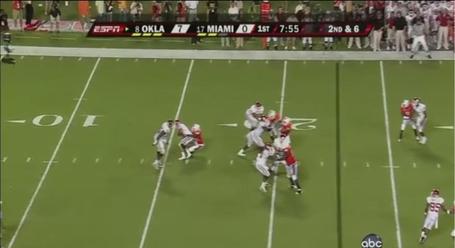 There's really not a whole lot to analyze here, save to comment on Marcus Robinson's great balance to finish the play.  There's no "freaky leg plant,' fancy pass rush move, or confusing blitz; on a four-man rush, Robinson just runs around Jones and then fights to stay on his feet as Jones tries to grab him.  This was a big sack because it came on the drive after Harris' second interception.  The Sooners could have rocked Miami way back on their heels if they marched right back down for a score like their previous drive.  Instead, this helped lead to a punt. 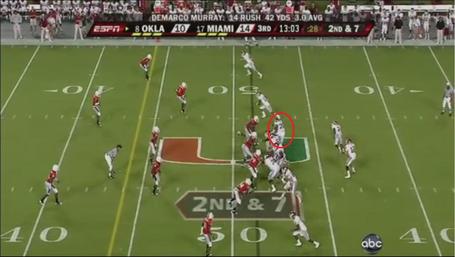 Here's the start of a designed rollout for Landry Jones.  Jarvis Jones is circled again. 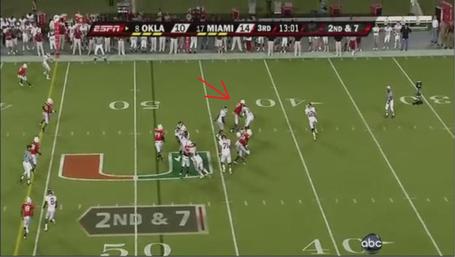 Allen Bailey has already gotten loose from Jones.  To be fair to Jones, the coverage was decent and Demarco Murray threw one heck of a lazy chip.  You can see Demarco standing around doing nothing. 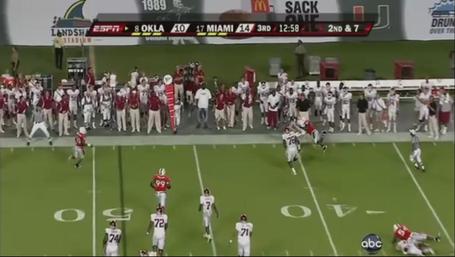 Landry Jones is dropped for the sack.  To add salt to the wound, the ref calls Jarvis Jones for holding, which is declined.

This play set up third and long, and on the next play, Jones was beaten on the edge again and Landry Jones rushed a throw for an incompletion.  OU got lucky because Sean Spence carelessly grabbed the receiver (wasn't much, but enough for the ref to see), but otherwise, this play would have led to a punt. 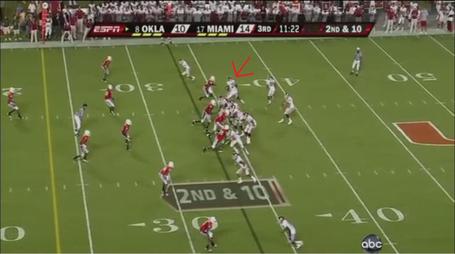 Later that same drive, here's Jarvis Jones against Marcus Robinson again.  Jones is clearly trying to avoid getting burned around the corner again and jumps out to meet Robinson. 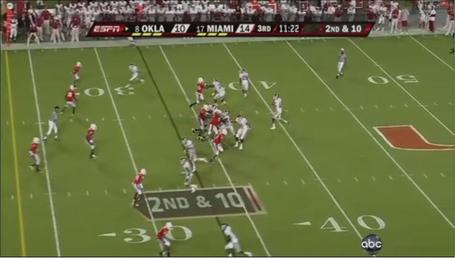 Unfortunately for Jones, Robinson stops, uses his arm to slap Jones further along with his momentum, and cuts back inside for a clear path to the quarterback. 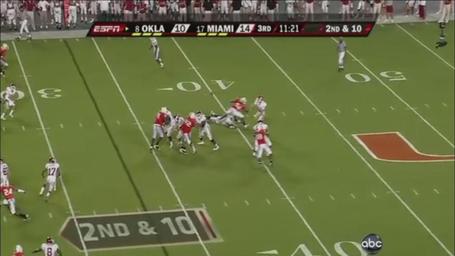 Not to be outdone again, Jones hits Robinson low from behind and takes him out, which should have been a penalty but wasn't called.

Jones, scared of the rush off the edge, over-committed and became susceptible to the inside move.  He resorted to a move that should have gotten him a 15 yard penalty, which seems common practice for these fellas.  Later this drive, Trent Williams would be called for a leg-whip. 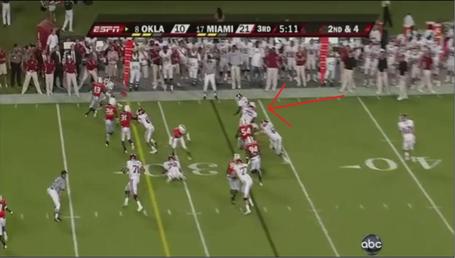 Of course, we have to talk at least a little about Cory Brandon.  Here, Brandon fails to seal the defender on an outside run and resorts to holding to get Murray free.  He is flagged. 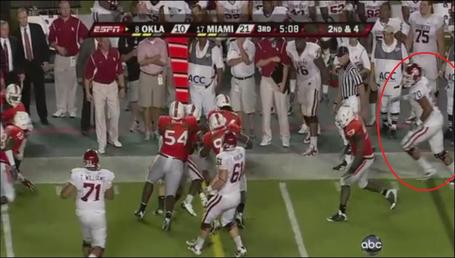 Murray's forward progress has been stopped and the play is clearly over, but Brandon wants to hit somebody.  For no reason.  See him eye his target, the jerk Marcus Robinson who dared to embarrass his teammate. 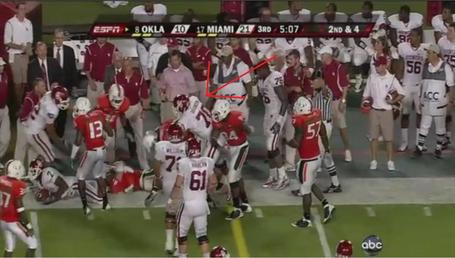 Brandon flies in after the play is over and bulldozes Robinson straight in the back, knocking the wind out of him for several moments.  Brandon, remarkably, is not flagged for this one.  Not cool, man.

And finally, early in the fourth quarter, Marcus Robinson put nifty spin move on Jarvis Jones to get around him, only to get tackled from behind.  Jones received his third holding penalty then.  I'm sure you're sick of pictures so I'll spare you this one.

Sergio Kindle can be moved to this side to create a very favorable matchup; after all, both of Kindle's big hits on Potts and Vittatoe came against right tackles.  Kindle (or any of our defensive ends) doesn't really need to worry about Jones or Brandon being able to block him on a regular basis.  Not even Trent Williams has shown good ability to handle athletic rushers from the edge.  What Kindle will have to watch out for, apparently, are holds, leg whips, blocks at the knees and from behind, and retributive shots to his back.  How lovely.

It's not just these two guys who need work, either.  Trent Williams has been underwhelming, Brian Simmons is out, Tavaris Jeffries is new and shaky, and Stephen Good, Simmons' probable replacement, got run over by a Baylor DT for a sack.  Brian Habern has also had problems, getting planted on his back by another Baylor defensive tackle on one play and struggling with recognizing blitzes.  Brody Eldridge can help as a blocking TE, but while he's a decent blocker, I've seen enough mistakes from him to know that he's not the greatest blocker in the Stoops' era.  It's certainly a mismatch if Eldridge is asked to block one of our DE's by himself, as he did against Miami.

We have had our own line problems, so I refrain from laughing at Brandon and Jones too much, but Oklahoma just lost a starter and their line wasn't even very good to begin with.  Their tackles are slow-footed, their guards are not very strong, and they have problems picking up blitzes.  We will do more four-man rushing as Miami did, but Baylor and BYU had success blitzing and it would obviously be prudent to mix similar blitzes in.

Our frustrating offensive performance against Colorado injected some concern in the fanbase, but if there's one major area of confidence, it's here:  The right tackles of OU are a big weakness, and it's a weakness we're well-equipped to take advantage of.