Sing along. You know the chorus.

Just the way we like them. Roddrick Muckelroy is quiet and dangerous.

Asked to name the meanest, most intimidating player on Texas this season, receiver John Chiles returned to his days as a quarterback.

He mentally went through all his options in about two seconds and settled on senior middle linebacker Roddrick Muckelroy. The reasoning?

"Because he's quiet, and you don't know what people are thinking when they're quiet," Chiles said. "You can't tell whether he's happy, mad, whatever."

Hmmmm. Everyone says the same thing.

"Just another conference game," UT quarterback Colt McCoy and defensive end Sergio Kindle each said in identical, clearly premeditated responses to questions about facing OU at the Cotton Bowl this Saturday. But not even Kindle could keep a straight face when delivering his line. He started shaking his head and chuckling before he even uttered the final word.

"It's always a challenge," Stoops said. "He’s a guy you have to account for on every play."

Sergio Kindle has a very tough audience. His dad.

Defensive end Sergio Kindle says his father is on him about getting more sacks. "I'm about seven behind where he thinks I should be," he said.

Kindle, who has two sacks, does have 16 quarterback pressures.

"That doesn't matter to him," Kindle said. "All that matters is if the ball is there."

What's the defense's goal in this year's game?

So, against one of the best quarterbacks in the country, what would the UT defense consider a good day in terms of points allowed?

It's not just that Mack Brown had trouble imagining Jordan Shipley becoming one of the country's most exciting and productive college football players.

Brown can look back and laugh about that part of the story because he's thrilled to have been wrong.

Funny how things play out. Some of us figured a Longhorn would win the Heisman Trophy this season, but maybe we've had our eye on the wrong one. 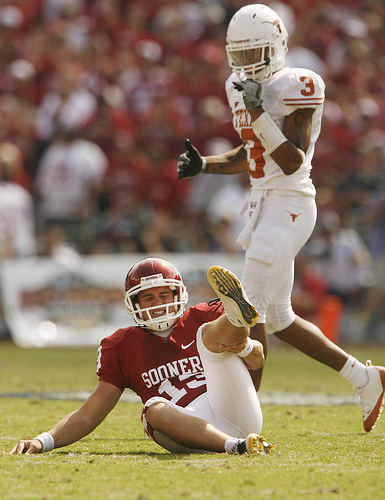 Will he get a raise? DeMarco Murray may have to work a little harder on Saturday.

The reason? Murray is completely healthy following hamstring and toe injuries that hampered him early on in the non-conference.

There was intelligent life in Oklahoma. There has been a brain drain at OU.

Over Bob Stoops' 11 seasons at OU, five of his assistants – Mike Leach, Mark Mangino, Mike Stoops, Chuck Long and Kevin Sumlin – have taken Football Bowl Subdivision head coaching jobs. Other than Kansas State's Bill Snyder – who's produced seven, including four on Stoops' coaching tree – no other current head coach has mentored as many. Certainly not three who have been as successful as Leach, Mangino and Sumlin.

And now that the coach formerly known as "Big Game Bob" has lost five straight BCS bowls and three straight national title matches and six of 10 bowls and three of four against Texas and two of five games this season, not to mention that he's 16-14 outside the state of Oklahoma dating to the USC debacle, it seems like more than coincidence.

Bob Stoops isn't the genius. His former assistants were.

Bob doesn't care about beating Texas. It is all about the championships.

"Everybody makes such a big deal about this game, but in the end, the objective is the championship. So that's what matters."

There is was a beef ad before the interview with Bradford about the Texas game. Coincidence?

Sam Bradford isn't as laid-back as he appears.

With OU ahead only 14-7, Bradford was "extremely vocal" during the break. Whatever Bradford said, it worked, as the Sooners rolled to a 33-7 win following a much smoother second half.

"That was the thing that we were missing a lot, Sam's leadership in the locker room," said left tackle Trent Williams. "It was kind of surprising."

Does OU's defense have a soft spot?

Faced with a single play to all but end the game, Oklahoma let Brigham Young tight end Dennis Pitta slip through the middle of its defense and catch his seventh pass of the game, a 23-yard reception on fourth-and-four, to keep the Cougars’ game-winning drive alive.

A month later, Miami tight end Dedrick Epps snatched an 11-yard go-ahead touchdown that gave the Hurricanes a lead they never gave back.

Those two plays were a major part of Oklahoma’s two losses. Two plays that, no matter how well the defense plays for the other hundreds of snaps, will be impossible to erase.

"We always feel pressure to stop passes,” said defensive coordinator Brent Venables. "But we have to minimize the short passing game.”

The "how” is the hard part.

More on all that criticism of Sooner offensive coordinator Kevin Wilson.

The Sooners are 3-2 pre-Texas, which constitutes a crisis. Someone must pay for such high crimes, and that someone is the guy calling plays. It’s an Oklahoma tradition, dating back 40 years ago when a know-nothing named Barry Switzer ran the Sooner offense.

NewsOK's Barry Tramel has a new name for Bob Stoops. And Jenni Carlson has her OU-Texas preview.

Sooner Sports has video highlights of past UT-OU games.

Leave the game at the Cotton Bowl.

"The tunnel feels like it's a mile long," Williams said. "You're so excited, you can't get to the field quick enough. You hear the rumbling outside. I love the Cotton Bowl. It's just historic.

"I wouldn't trade it for the world."

Neither team should score 20 points which means both teams will score over 30, because college football never works out the way you think (UTEP over Houston!? What?). I can say with some confidence that OU won’t score over 20, and I can say with some confidence that we at least have that ability, so I am taking Texas is a close one. It’ll probably look like the Tech game where we aren’t really in danger of losing, but one big mistake could do us in in the second half. I see it coming down to mistakes. Whoever can play their game without doing anything stupid will win. This seems like a good place to point out that the Texas offense or special teams has given up points in all 5 games so far. Sleep tight!

And finally... Just in case you have forgotten.