The first several offensive iterations of this series have mostly focused on Colt McCoy's poor decisions and reads, and particularly on his frustrating tendency to at times lock in on his roommate and close friend, Jordan Shipley. Since teams are playing more zone defense against the Longhorns this season, it means that the defensive backs can do a better job of reading McCoy's eyes and anticipating his passes, they don't have to turn their backs to run with the receivers.

Furthermore, teams at this point in the season are willing to keep two safeties deep most of the time and play the cornerbacks off the Longhorn receivers, daring McCoy to complete short passes in front of them. Then, in instances like the pick six against UTEP, a cornerback may be able to jump a hitch if he times it correctly and get a big play out of it. Baiting McCoy, essentially, knowing that the two will make a sight adjustment to a hitch route or another shorter pattern.

Throughout the first half of the game against Colorado, the only really successful aspect of the offense was McCoy throwing to Shipley, whom the Buffaloes decided to single cover for much of the period. Bad idea. Prior to the following play, McCoy and Shipley had hooked up six times for 66 yards. After two long drives that resulted in only three points for Texas, the situation was becoming a litle bit more desperate late in the first half, having just given up a touchdown to stretch the Colorado lead to 14-3, shocking considering the pre-game expectations.

Just like the game against Wyoming, the Longhorns needed a momentum-changing drive before halftime. Eschewing the ineffective running game in the one-minute drill, Texas moved the ball steadily, hitting passes underneath for short gains, but keeping the chains moving. After a first-down completion to Shipley, the Longhorns called a timeout with just over a minute left in the half.

According to the Statesman, that's when McCoy mentioned to Greg Davis that he thought Shipley could beat the Colorado coverage with a double move, as he noticed the defender sitting on the shorter routes. Davis concurred. After a screen pass to Marquise Goodwin that could have gone for big yardage had the pulling linemen been able to make their blocks, it was time for the big play, one the Longhorns don't use often, but usually to great effect. 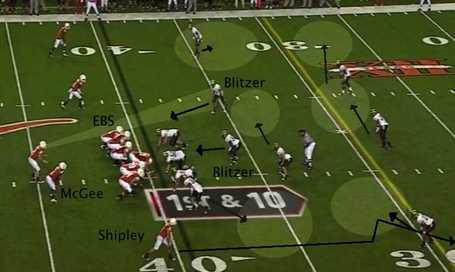 The Colorado defensive calls sets up perfectly for Shipley's double move -- CU calls a zone blitz on the play, bringing the linebacker in the middle of the field and the nickel back. Since the double move takes time to develop, Davis calls for maximum protection, keeping Vondrell McGee in the backfield and inserting EBS, as, well, an extra blocking surface. In his pre-snap read, McCoy sees the nickel back walking towards the line of scrimmage and should recognize zone coverage, but it doesn't even really matter, because the important thing is that even though there are two safeties deep, the blitzing nickel back forces them both to cover the strong side of the field.

McCoy isn't concerned about the strong side of the field, because this play is for Shipley on the weak side all the way. The weakside defensive end bails out into the flat to cover a slant or crossing route, while the cornerback covers the zone behind him. However, the important thing to note here is that the cornerback has no help over the top. 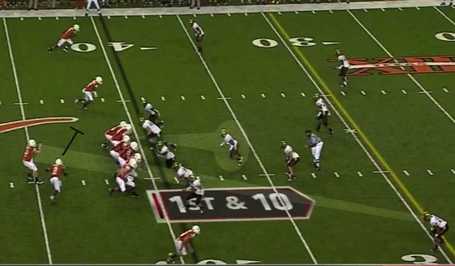 McGee crosses in front of McCoy to pick up the blitzing nickel back, while the left guard focuses in on the blitzing linebacker. The weakside cornerback has his eyes on McCoy.

On this play, there's no concern about McCoy locking in on Shipley -- that's going to help make the cornerback bite on the inside fake. Let's take a look from the end zone view:

As Shipley approaches the cornerback, there are at least four routes he could be running -- if it's an option route, he could go inside or outside depending on the coverage, he could run the post, and he could stop and run the curl. 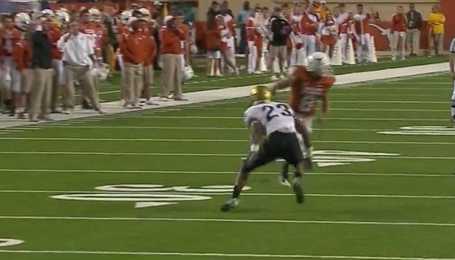 Shipley fakes the post and the cornerback plants and bites on the inside fake. Notice that Shipley turns his shoulders and head to fake looking back for the ball, a subtle but key aspect of selling the route inside. 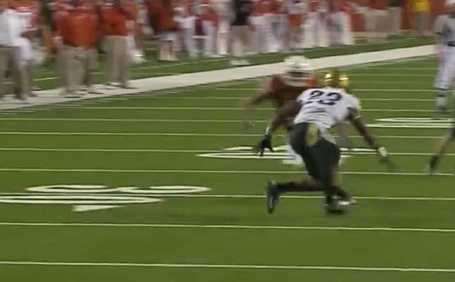 Shipley plants his foot hard to begin accelerating to the outside and this is where Shipley is so sensational -- his ability to change direction on a dime and then quickly get up to speed. The defender knows now he's made a big mistake: 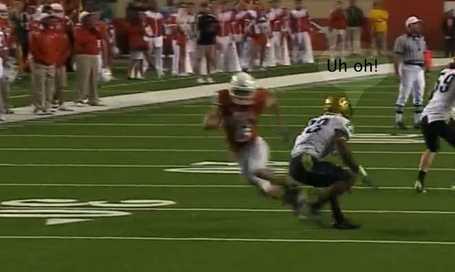 The defender is off balance and heading in the wrong direction. Now, Shipley just has to create the separation and wait for the football: 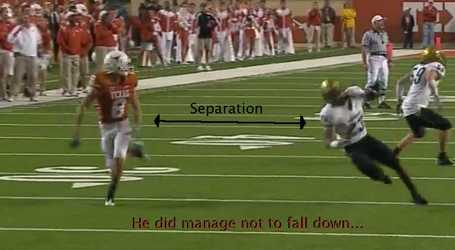 Meanwhile, McGee has pretty much whiffs on his block, but McCoy is ready to unload the football:

Back with Shipley, he's still got that separation: 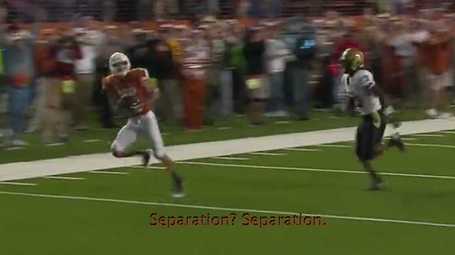 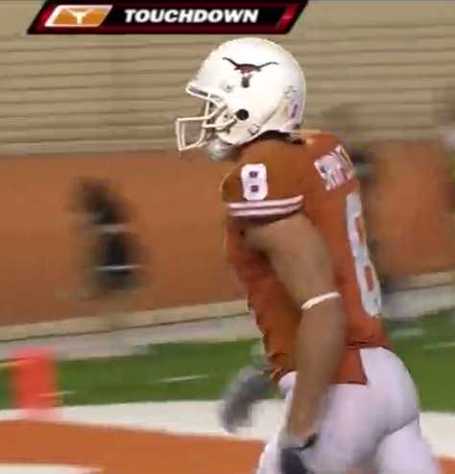 Defensive backs will continue to sit back in coverage and try to keep what the Longhorns are doing in front of them. In addition, Shipley will see bracket coverage most of the year -- Colorado made a pretty big mistake by trying to defend him with one player early in the game, the Longhorns just didn't make them pay until this play. With a safety over the top, it might become harder to hit the double move over the top, but Shipley also runs excellent double moves on short routes like the crossing route or other more intermediate routes, like the play that sealed the game against Oklahoma State last season.

In the Cotton Bowl this weekend, Shipley will need to be a major factor for Texas and expect Greg Davis to move him around a bit more than he has so far this season if Oklahoma puts more than one defender on Shipley's side of the field. If the Oklahoma defensive backs start jumping the shorter routes, expect a double move from Shipley, which could prove to be a major turning point in the game.

The best aspect of it all? McCoy staring down Shipley only helps these types of moves. Roommates!