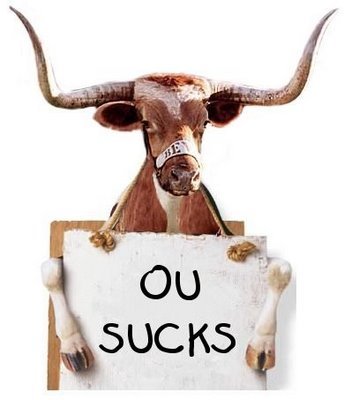 This is the game of the week.

Jordan Shipley will be the most important offensive player in the Cotton Bowl. Last year's Heisman winner and runner-up haven't put together the seasons we expected. Sam Bradford missed three-plus games with a shoulder injury. Colt McCoy has already thrown six interceptions. Their duel is an interesting storyline, but McCoy's roommate and fishing buddy Shipley could overshadow it.

This is our first big test of the season.

When Texas coach Mack Brown sat down for his Monday news conference, his first words into the microphone were, "It's finally here."

To which the rest of us say: It's about time. We need the Red River Rivalry between Texas and Oklahoma to get a read on the boys in burnt orange.

You just kind of have to go with who’s healthy. You have to really rely on your doctors and your players for information and their input and how they feel and get a good read on those players. I was very optimistic about what I saw today. I feel good about that. When you’ve got guys like Vondrell and Tre’ who have taken a lot of reps, it’s good to get somebody else some reps to get them worked in the routine and those guys can get mental reps. They’ve gotten a lot of grass reps in the last five weeks, so it’s good to stand back and let somebody else get a few more looks at the runs.

You gotta be yourself. Colt McCoy has to find his own way.

One reason for McCoy's slow start, a factor that has remained under the radar, was his attempt to incorporate suggestions from Manning, the cerebral Indianapolis Colts quarterback.

As a counselor at the Manning Passing Academy this summer, McCoy received the all-access tour of being Peyton Manning. A key, Manning told McCoy, was preparation – constantly taking notes and focusing on the mental game during film sessions and talks with coaches.

McCoy immediately put Manning's insight into practice and found he was overloaded.

"You can definitely do that in a place like this with the expectations and pressures," McCoy said. "You can almost watch too much film, take too much notes instead of going out there reacting and playing with the gifts you have. I've had to balance that.

Our secondary has matured.

Texas coach Mack Brown talked Wednesday about the pie-eyed look he saw in his secondary during last year's OU game. The memory made him smile Wednesday; a year ago at this time, he was fretting.

Brown said he hasn't witnessed such a look since, especially this season. Last year's group, which included two freshmen and three sophomores against Oklahoma, now is considered a strength.

Brown credited that harsh initiation that Bradford and the OU offense gave the Texas secondary in 2008 for helping the group to play at a higher level in 2009.

"The game last year really helped those guys," Brown said. "And, we're getting more pressure on the quarterback than at any other time I can remember."

Despite a report to the contrary, McCoy is fine.

"If he got hurt, it was in the locker room," Brown said after the American-Statesman reported McCoy was walking stiff-legged when two reporters saw him leaving Texas' athletic facility on Tuesday. "He was running around and doing everything he typically does at practice."

We really need this win.

Besides border feud bragging rights, Texas needs a win to hang on to its national title hopes. The Sooners, even with two losses, can seize control of the Big 12 South Division with a win and with Sam Bradford back at quarterback, could run the table. Texas QB Colt McCoy needs a big game to restart a Heisman Trophy campaign.

A fearless prediction. Texas by a hair...or so.

Of course the spotlight will be on the two quarterbacks, who should be slinging it around on Sundays right now instead of for their respective college teams, but they hardly the only main players. McCoy has been fine, but nothing special, while his best friend, Shipley, has been a game-changing, All-America target who has taken the offense by the horns. The sixth-year senior caught 11 passes for 112 yards and a touchdown against the Sooners last year, and over his last three games he has caught 11 passes (Texas Tech), 10 (UTEP), and 11 (Colorado) and returned punts for scores against Texas Tech and Colorado. For Oklahoma, this is the big redemption game for LB Ryan Reynolds. The Sooners were in control of last year's game against the Longhorns, and then Reynolds suffered a season-ending knee injury and everything changed. All of a sudden, McCoy was connecting on everything over the middle of the field and the Longhorn passing game started to catch fire. 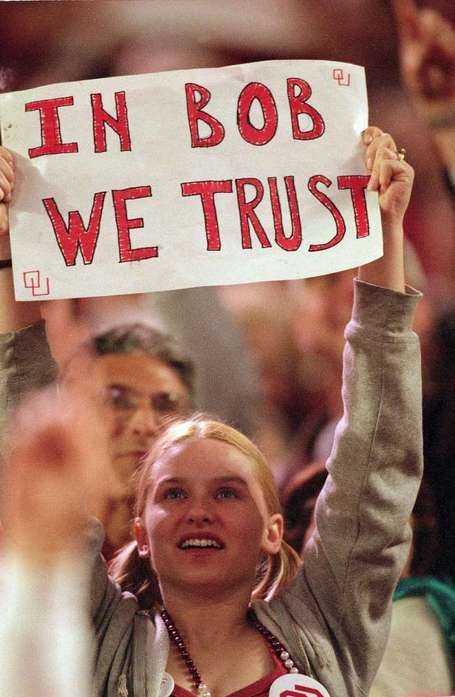 Oops. Dropped passes have been an issue for the Sooners.

Cameron Kenney earned himself a spot on the bench for No. 20 Oklahoma with a series of dropped passes.

Brandon Caleb, DeMarco Murray and DeJuan Miller were guilty, too. By the time offensive coordinator Kevin Wilson was done counting up the number of drops, he had reached double digits.

"We had enough drops the other day if we benched everybody for drops, we'd be playing with six or seven players," Wilson said.

Blame it on a lack of rapport with Heisman Trophy winner Sam Bradford, who returned after missing a month with a sprained joint in his right shoulder. Blame it on the inexperience of an Oklahoma receiving corps that was without its top four pass-catchers from last season. Or blame it on a simple lack of concentration.

The Sooner defensive front had a lot of preseason hype. Have they lived up to expectations?

So maybe the Oklahoma front four shouldn't step to the front of the class after all.

They certainly don't belong anywhere near the back of the room, but Gerald McCoy and friends still haven't played quite as advertised.

Remember, the ballyhooed defensive line of the Sooners was billed as the greatest thing since sliced Tebow. They were supposed to make fans forget the Selmon brothers of the mid-'70s.

This is Ryan Reynolds' year.

Heading into last year’s Red River Shootout, Reynolds was playing the best football of his life. The week before the Texas game, Reynolds earned a 100 percent grade from Venables. Never before had Venables awarded a perfect score, and Venables coached two Butkus Award winners.

"I was feeling real good,” Reynolds said. "Everything was going my way.”

He was also arguably the most valuable player on a defense breaking in a pair of first-year starters at outside linebacker in Keenan Clayton and Lewis.

Receiver Ryan Broyles is back practicing but Stoops has not made a decision about Saturday. Safety Quinton Carter is a game time decision.

Will Bradford come back next year?

Sam Bradford was walking away from the podium after the Sooners' news conference yesterday in Norman when he was asked if he would like to duplicate the four-year career that his good friend Colt McCoy has enjoyed at Texas.

Will this game be a defensive showdown?

Whereas run 'n' gun was the name of the game in 2008's Red River Shootout, it appears as though the two teams' defenses may lead the way on Saturday.

Are we looking at a 13-10 defensive battle? Perhaps.

This game can be great for recruiting high school players.

"It's definitely a fun game to be at," Shipley said. "There's no other atmosphere that I've seen that's like it with the State Fair going on and it being on a neutral site, half burnt orange and half crimson. It's really a special atmosphere."

After attending the game, the Red River Rivalry was among the reasons why Shipley decided to attend Texas.

"When you come to Texas, you want to be a part of really big games and be on good teams," Shipley said. "It's definitely the reason you come here is to be in games like this one."

With all the Horn love for Sam Bradford, will this be a reunion instead of the tough game we know and love?

With such gushing praise for the opposition, we have to wonder... has the Red River Rivalry gone soft?

Not likely. A more reasonable explanation is a desire to not rehash what happened last year — when the Longhorns defeated the Sooners, 45-35, but still lost out on the opportunity to compete for the BCS Championship because of convoluted conference tiebreaker rules.

Hungry? There are a bunch of juicy story lines in the RRS.

IH-35 traffic. If you are driving, you are in for a fun time.

I bet that was a meaningful talk. Barry Switzer talks to first graders.

Former University of Oklahoma and Dallas Cowboys football coach Barry Switzer made an appearance at a Crossings Community Church on Tuesday night as he talked to members of the Crossings Colts, a first grade football team.

After telling the young boys to try hard in everything they do, the legend opened himself up to questions from the parents. The Super Bowl Champion coach spoke on everything from fur coats, Urban Meyer, the wishbone, to OU vs. Texas, to the game that slipped away.

And just what is a Sooner?

Sooner is the name first applied about six months after the Land Run of 1889 to people who entered the Oklahoma District (Unassigned Lands) before the designated time. The term derived from a section in the Indian Appropriation Act of March 2, 1889, which became known as the "sooner clause." It stated that no person should be permitted to enter upon and occupy the land before the time designated in the president's opening proclamation and that anyone who violated the provision would be denied a right to the land.

Illegal claimants were initially called "moonshiners," because they entered the area "by the light of the moon." Sooners or moonshiners hid out in brush or ravines, then suddenly appeared to stake a claim after the run started, giving them clear advantage over law-abiding settlers who made the run from the borders.