The State of Oklahoma: OU's Aggressive Linebackers and Safeties. Can We Make Them Pay?

Share All sharing options for: The State of Oklahoma: OU's Aggressive Linebackers and Safeties. Can We Make Them Pay?

Forgive my lack of content the last couple of days.  I've been busy, but now I'm glad to be able to just focus on the game this weekend.

Let's cut to the chase.  PB noted Brent Venables' aggressive style and OU's vulnerability against passes around the middle of the field.  With that in mind, I want to focus specifically on the linebackers and safeties for this post and discuss some of the things I saw when I was watching film of the Miami game.  In a nutshell, while OU has a good set of linebackers, they can be a bit too aggressive at times and get out of position, leaving the OU defense susceptible to big running plays and/or open passes in the middle.  Don't get me wrong; while Reynolds is slow, Clayton and Lewis are pretty athletic and they can make plays.  Nonetheless, their aggressive style can be used against them, and I think Miami did a decent job of  using misdirection plays to take advantage of this.  As far as their safeties... well, they aren't slower than last year's, at least.

Disclaimer:  Texas is not going to be running these plays, as far as I can understand.  One may question how much use this can be since we will not be in these formations, nor do we do a whole lot of "misdirection," but here's hoping that GD has seen the same things and will have something along these lines.

Anyway, I decided to look at three plays in the Miami game:  The 20 yard run, the 50 yard run, and the playaction pass to Epps that iced the game for the 'Canes.  They are remarkably similar, as you will see below.

This is Miami's second drive, before Harris threw his second interception. 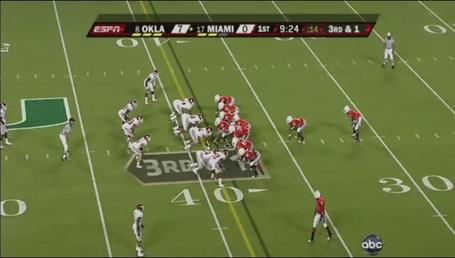 Miami is in the I-formation here with two tight ends.  Oklahoma is in their  4-3, with Clayton up at the line of scrimmage over the tight end and Sam Proctor scooting up in the middle. 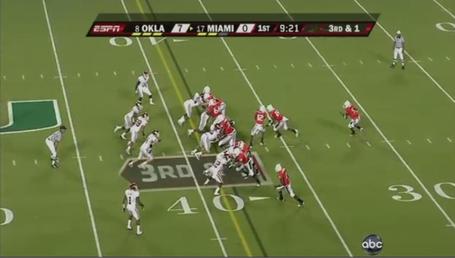 At the snap of the ball, Reynolds, Proctor, and Lewis move forward.  Playing run is here is obviously logical, but that's not what the problem is. 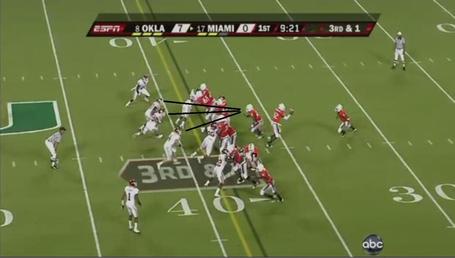 Unfortunately for Ryan Reynolds in particular, this is a counter play.  Notice how all three linebackers have their eyes on the fullback.  Reynolds begins to move out of position. 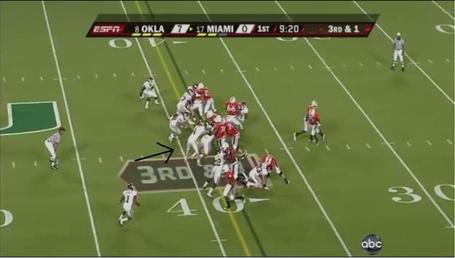 At this point, Reynolds is way out of position and has no idea that James has the ball. 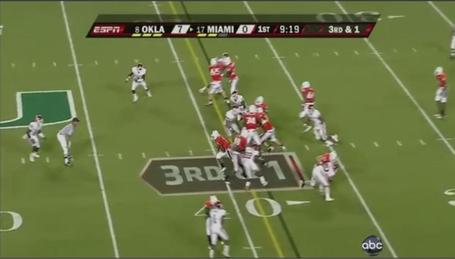 Reynolds realizes what's going and tries to come back and make the tackle, but he's too late.  You can't see him here since he's on the ground, and James is loose in the secondary for a 20 yard gain.

This play is very similar so I'll use less pictures. 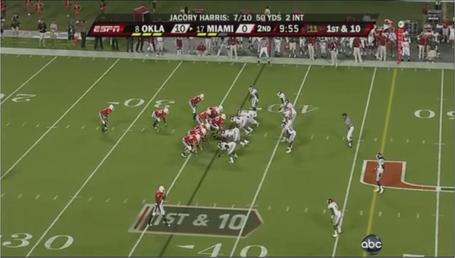 Again we have two tight ends and a fullback, although Miami is not in the I.  Also, Oklahoma is the over 4-3. 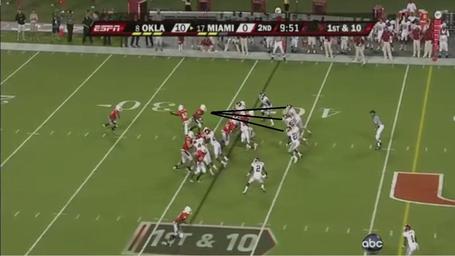 After the tight end Tervaris Johnson goes in motion, the ball is snapped and the fullback goes to lead block.  Notice that again, all the eyes of the linebackers plus Proctor are on the fullback. 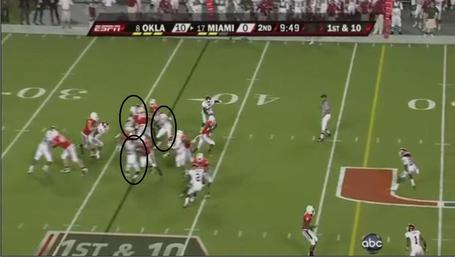 Once again, this was a counter play.  I've circled Proctor, Reynolds, and Lewis.  Proctor, the bottom left circle, figured out what was going on and tried to recover, but not only did the guard see him coming and move off from his double team to take him out of the play, Proctor overran it anyway.  Reynolds is the top left guy and was well out of the play.  Lewis got picked up bya block and then it was off to the races for James.

Proctor, Lewis, and Clayton can all hit, and Reynolds is decent.  They don't, however, seem great at reading misdirection plays, seeming jumping at the first sign of movement and committing away from their positions.  To be fair, they were a bit better against similar counter plays later in the game, although one time James was robbed out of  a large gain by a tackle from Jeremy Beal, who is playing very well right now.

We don't have a lot of misdirection in our offense so far; I'm not sure if I would classify our favorite counter play as such.  Who knows what GD will do with this, if anything, but these guys will take a false step on a misdirection and give up some yards.

3rd and 6, first down throw to Epps 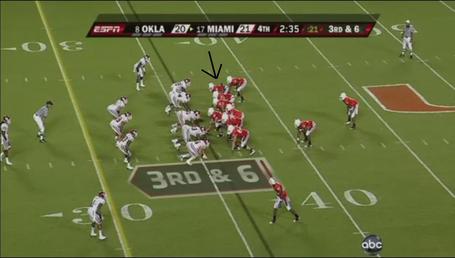 Same formation as above, for both squads, except the second tight end starts out on the strongside.  I've located Epps for you. 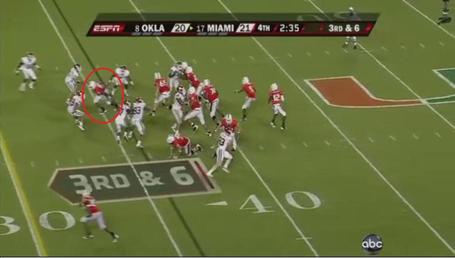 The fullback switches sides before the snap and causes the three players in the middle to likewise shift over andl look for the run.  Harris fakes the handoff and once again, Proctor, Reynolds, and Lewis commit and have their eyes on James this time.  Epps does the ol' falling down trick and slips out. 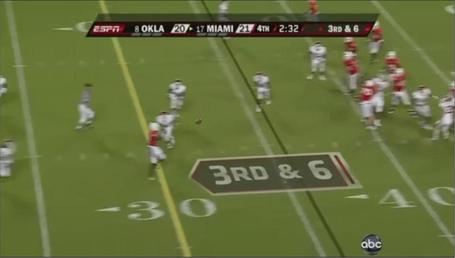 Proctor has no chance of recovery and this first down pretty much ends the game.

While Dan Buckner should be successful anyway this weekend, using playaction like this on these aggressive players can really open things up underneath the deep coverage.  Granted, there's a certain logic here for Oklahoma to play the run aggressively since the "safe" option for Miami would have been to run the ball to guarantee that the clock would keep running.  However, they had to know that the pass was a very real possibility to go for the win, and it was a pretty easy throw for Harris since Proctor vacated that area.

This applies to us how?

Uh, good question.  Certainly, Buckner can punish OU in the middle of the  field, as can Shipley, without the need of "misdirection."  Furthermore, it's difficult to fool defenses with a playaction if you can't run the ball well.  Still, noting the tendency to be overly aggressive is something GD should do, and if we have plays to exploit that, I expect to see them.  Who knows; maybe OU will give us a big play in the Wildhorn, if we see the formation (personally, I'm not too much of a fan of it, but we'll see).  Given our struggles against CU, I wonder if OU will even drop Proctor down; even so, Proctor likes to fly to the action and can be beaten when he's deep as well.

On a more general level, this at the least reaffirms to me that I'm not all that worried about OU's secondaries, and I'm not even all that worried about their linebackers.  It's their line that concerns me, and I think only they can really beat us.  If our offensive line can hold their own, I think that while the LB's will rack up some tackles, we can have a lot of success against this back seven.