The Sapid Destruction of the Sooner Season

Share All sharing options for: The Sapid Destruction of the Sooner Season 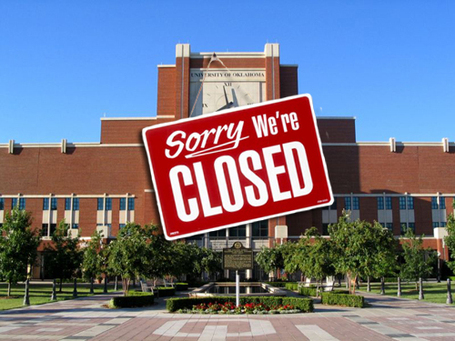 The season is over, Sooners. Get on with your lives. 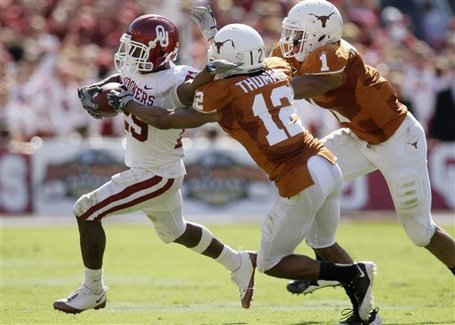 Beauty is always in the eye of the beholder. It was ugly, but it was a win.

The 104th edition of this series was one of the ugliest, with the teams combining for eight turnovers and only a single touchdown from each of their supposedly high-scoring offenses.

But for McCoy and the Longhorns (6-0, 3-0 Big 12), all that matters is the W. It's their fourth in five years against the Sooners and it keeps alive their hopes of winning the national championship. They'll have to be a lot crisper than this to win at Missouri and at Oklahoma State the next two weeks.

Sergio KIndle summed it up.

"We basically had to put it on the shoulders of the front four and let the back seven take care of the passing game," said defensive end Sergio Kindle, who had four of UT's 10 tackles for losses. "We welcome for the game to be on our shoulders. We want it to be a down-in-the-trenches kind of game. What more could you ask for?"

Well, burnt orange nitpickers might want more sacks from Kindle and Co., but the threat of the front four's pass-rushing ability did enough damage.

Turns out, McCoy hit his right thumb on the helmet of Oklahoma's Gerald McCoy early in the game. It left him with a bruised and battered fingernail. On top of that, McCoy had been ill for much of the week.

"It didn't impact my throwing," said McCoy, who was 21-of-39 with an interception. "My fingernail is about gone. I guess I'll have it checked out by the doctors."

But enough about Colt McCoy...

Enough about Colt McCoy and the Texas offense. The Longhorns knocked off rival Oklahoma on Saturday because of their defense.

Aaron Williams knocked out Heisman Trophy winner Sam Bradford on a first-quarter sack, then he and Earl Thomas picked off backup Landry Jones in the fourth quarter to send No. 3 Texas to a 16-13 victory Saturday over the No. 20 Sooners.

The 104th edition of this series was one of the ugliest, with the teams combining for eight turnovers and only a single touchdown from each of their supposedly high-scoring offenses.

That's not to say Texas' offensive line was ever in control. It's only by the twists of fate that Bradford was the quarterback who left the game instead of Colt McCoy, who survived four sacks by the Oklahoma defense and a dozen more heavy hits. For some perspective on how uncomfortable McCoy was in the pocket from beginning to end, consider his vaunted completion percentage: After setting a new national record by hitting more than 76 percent of his throws last year and connecting on a national-best 73.4 percent through his first five games this year, McCoy's 21-of-40 effort today (52.5) was his least accurate since October 2007, a span of 23 games. He was forced to get rid of the ball so quickly that the Longhorns' longest gain of the game through the air was 14 yards, on the quick slant to Marquise Goodwin for UT's only touchdown. Sixteen points on 265 total yards was the 'Horns' worst production in both categories since 2006. The battle of "Texas Offense vs. Oklahoma Defense" was clearly won by the Oklahoma defense.

The Austin American-Statesman has the box score and the season interactive scoring drives. 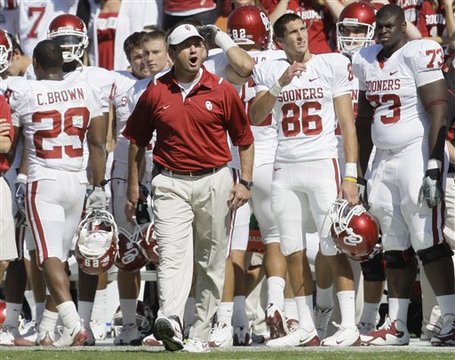 That's really too bad. The Sooners are restless.

And just as Brown not so long ago needed a victory over the Sooners in the worst of ways, Stoops now desperately needs to beat the Bevos.

The honeymoon has ended in Oklahoma. Sooner Nation still loves its coach, but the sizzle is gone.

Some time during the BCS bowl drought, or after yet another narrow defeat, or during Brown’s ascension back to equal status in this series, Stoops’ star lost its shine.

Bob has some thoughts about the game.

Ryan Reynolds finally finished a game. And it was a pretty good one, too.

Reynolds finished the day with seven tackles, a tackle for loss and a fumble recovery coming on Texas' third play from scrimmage.

"It was great. Being hurt last year, it was nice to be able to play," Reynolds said. "Great atmosphere. Fun game.

"Couple plays here or there, and it's a different outcome."

Tight end, center, left guard... who can keep up with Brody Eldridge?

First, the Sooners were missing starting left guard Brian Simmons, out with a knee injury.

Second, Wilson's game plan was to run predominantly a spread offense against the Longhorns, which would have put Eldridge on the sidelines for much of the game.

And once again the Sooners did not win the special teams war.

On his first kick of the day, Oklahoma kicker Jimmy Stevens rattled the left upright with a 26-yard attempt, but the ball slipped behind the right upright to give the Sooners an early 3-0 lead. 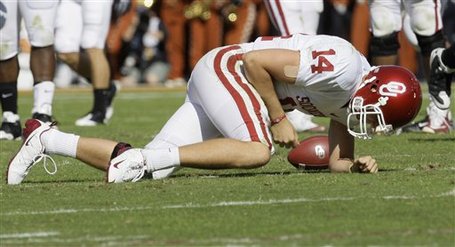 Oklahomans are tired of the same scenery.

The scene was too familiar: Oklahoma's Heisman-winning quarterback hunched over, his helmet on the turf, gingerly reaching for his right shoulder.

Bob is a gambling man.

Oklahoma coach Bob Stoops was faced with a pair of fourth downs with less than a yard to gain twice in the fourth quarter.

He gambled both times.

Texas didn't want Jeremy Beal. At least not until Oklahoma did. But by then, it was too late. Beal's commitment to the Sooners back in 2005 was much more than just verbal. "I had already committed to OU, so it was pretty much a done deal," he said.

NewsOK has the Sooners' report card.

What we can assume everyone in Norman is feeling tonight...

Christmas has come early this year. Enjoy the rest of your weekend.