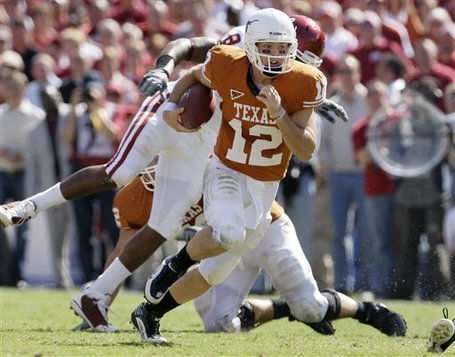 Colt McCoy is learning all the time.

It was a frustrated yet resolute Texas offense that gathered in the home locker room at halftime of Saturday's Red River Rivalry at the Cotton Bowl.

Something had to change. That much the Longhorns knew.

For the first 30 minutes, nothing went right. The Sooners dominated the line of scrimmage and confused the Longhorns with formations and schemes that hadn't been in the playbook in years.

"I saw four or five blitzes I'd never seen in my life," quarterback Colt McCoy said.

McCoy's thumb is just fine and he is ready to go, but he will probably lose his nail.

So what if a few mistakes were made on Saturday? We won and that's all that really counts.

So who cares if Colt McCoy kept throwing the ball to Oklahoma defenders?

Raise your hand if you've never made a mistake, and be honest. The truth is only sports columnists know all and see all.

Besides, McCoy could spend a day and a half telling you how his young receivers kept turning the wrong way and OU's blitz was brutal. He knows you're probably not interested in how the sausage is made.

Thanks for making a larger point for me. Texas defeated Oklahoma 16-13 on Saturday afternoon. Texas is 6-0.

It was dirty in the trenches. Just what Sergio KIndle likes.

"We basically had to put it on the shoulders of the front four and let the back seven take care of the passing game," said defensive end Sergio Kindle, who had four of UT's 10 tackles for losses. "We welcome for the game to be on our shoulders. We want it to be a down-in-the-trenches kind of game. What more could you ask for?"

Kirk Bohls is looking for Dan Buckner. If you see him, contact Kirk immediately.

Anyone seen Dan Buckner? I realize Texas went to blocking tight end Greg Smith for extra protection for an under-siege Colt McCoy, but McCoy threw to Smith four times, by my count, and only once to Buckner, Texas' best wide receiver weapon after that one-time Heisman candidate Jordan Shipley. It's pretty clear McCoy is missing Quan Cosby big-time. Note to the highly disappointing James Kirkendoll: great catch, but keep your cool. Yours was the stupid penalty of the day.

Some love for Marquise Goodwin from none other than Thayer Evans.

The move paid off Saturday, when Goodwin scored Texas’ only touchdown of the game and the first of his career on a 14-yard reception in a 16-13 victory against Oklahoma. He finished the game with four catches for 36 yards.

"He’s really good," Brown said. "I’m excited about watching him in the future."

We'll take it. It just may not look good to anyone else.

Halfway through the season and Texas is right where it wants to be. Well, if you consider a clunky offense featuring anonymous running backs, guided by a quarterback with a banged up thumb the way to go.

Well, yes, then Texas is right where it wants to be.

There is only one goal.

After they beat Oklahoma last year, the Texas Longhorns learned just about everything there is to know about the Bowl Championship Series standings.

And when their crash course was completed?

The Longhorns still were stuck with just the one simple truth they knew along.

"If you win ‘em all," defensive end Sergio Kindle said, "there's no doubt."

The Horns are in a prime position in the BCS rankings.

Never before in the history of polls have the Longhorns lost ground after a defeat of Oklahoma. However, being third behind Florida and Alabama in the first BCS rating of the season isn't such a bad thing because the Gators and Crimson Tide are on track to play in the Southeastern Conference title game, and one of those teams likely would drop behind Texas if the Longhorns stay undefeated.

Last year, Missouri's running game was abysmal against the Longhorns. Texas took a commanding lead so quickly that Missouri could not run with any effectiveness. Washington and former running back Jimmy Jackson carried the ball 14 times for just 34 yards.

"We gotta play a physical game," Moore said. "They're a great team. That just makes us step it up."

The offense is looking for more consistency.

In recent seasons, the Tigers offense was known for lighting up the scoreboard. In 2007, the team averaged 39.9 points per game, then upped that to 42.2 last season.

This year, Missouri has seen that production drop to 29.3 points per game. The games against Nebraska and most recently, Oklahoma State, have especially illustrated Missouri’s struggles pushing the ball into the end zone.

"It’s just obvious if you look at us all year on offense, you haven’t seen us, except for our first football game, consistent," coach Gary Pinkel said.

Quarterback Blaine Gabbert is playing in pain, but he will start against Texas.

While not elaborating on the depth of quarterback Blaine Gabbert’s ongoing ankle injury, Pinkel continued to express his admiration of Gabbert’s toughness and ability and willingness to keep playing in pain: "Chase Daniel never had to do this; Brad Smith never had to do this," said Pinkel, adding that Gabbert’s continuing play is predicated on clearance by the medical staff and Gabbert’s own desire.

We hate to ruin Missouri's homecoming game, but that's the way it has to be.

This isn't a political statement, but this really is the only thing going on in College Station. There certainly isn't any football happening. President Obama spoke to the Aggies about the importance of service.

In case you missed this over at Every Day Should Be Saturday...

Oh, and someone is really pee-ood in College Station.

I could sit here with a thesaurus for about an hour and come up with more words to describe your "Fighting" Texas Aggies' performance Saturday in Manhattan, Kan.

62-14. Come on sunshine pumpers, let that resonate for a second.

That really wasn't the Aggies in Manhattan last Saturday? Then who was it?

Junior quarterback Jerrod Johnson said, " For whatever reason, it wasn't us out there. This isn't how you play the game. This was a completely different team from last week and I really don't know why. We can assess the problems and try to get back and get a win against Texas Tech."

Maybe the Aggies should just focus on serving mankind.

Sam Bradford will not start against Kansas.

The Sooner defense gives everyone hope about the rest of the season.

"I think we have enough tough, strong-minded guys that they recognize that we’re still a very good team," said defensive coordinator Brent Venables. "We’re just a few plays away from being in much better position. We have to continue to fight, continue to do the things that we’ve done in terms of preparation and practice.

"Things will go our way. We’ll make things go our way and I know they will."

They are succeeding in one area. The Sooners lead the nation in penalty yardage per game.

The Sooners have lost 12 turnovers this season, which, compared to other teams, isn’t so bad.

But penalties have been a killer.

OU currently is leading the nation with 84.5 penalty yards per game.

The Cowboy defense had a great second half against Missouri.

"I was proud of our team and how they bounced back and stopped them after that reverse,” coach Mike Gundy said. "That was a big momentum swing right there.”

Those four plays were the opposite of the opening 30 minutes, which saw the Cowboys’ poor tackling lead to big plays and Mizzou touchdowns.

Can you guess who is at the top of the North Division?

How did the Wildcats decimate the Aggies?

"We were just getting out there, getting after it, and trying to cause turnovers and put our offense in a good position to score," Fitzgerald said. "As a team we did a lot better job of getting after the quarterback."

"The defensive line got down and did their job," Moore said. "They were relentless tonight. If we can keep getting that out of them, I think we will be good on the back end."

There are some new faces on the Jayhawk defense.

"I was pleased with the performance of Lubbock Smith and D.J. Beshears," Mangino said. "In what limited time we had John Williams out there, and Bradley McDougald I'm pleased with the direction they're going. They're kind of on a speed course, but I like what they did and they're gonna play more and more at those positions."

There was a method in Dan Hawkins' madness.

Tyler Hansen made an impression Saturday night in his first start of 2009.

Receiver Scotty McKnight remembers watching Colorado’s sophomore quarterback scramble around the backfield on many occasions. A few were more memorable than others.

"Sometimes, it looks like it’s helter-skelter, but it’s not," Hawkins said. "There’s a rhyme and a reason to the way to do things."

Who will start at quarterback when the Cornhuskers play Iowa State? Bo Pelini isn't telling.

Nebraska coach Bo Pelini says who starts at quarterback against Iowa State on Saturday will be a "game-time decision."

Pelini said Monday on the Big 12 football coaches teleconference with reporters that he needs more leadership from the quarterback position.

Pelini said nothing has changed with regard to the starter but that Zac Lee and Cody Green will compete for the job in practice this week.

Baylor has more problems than just a couple of losses.

But in 30 years in the business, he’s never dealt with a rash of injuries quite like this season’s.

It is that time of year again. The BCS rankings are out and everyone is taking shots at the system.

Despite moving up to No. 4 in the polls Sunday, USC ranked only 11th in the computer component that is part of the formula for determining the BCS standings.

That left the Trojans at No. 7 in the first standings.

"It's a huge discrepancy," Carroll said. "I would think that gives you a lot of reason to question the end result. Is the goal to find the team with the best record or the best team?"

Cincinnati's Brian Kelly also has problems with the BCS.

"It’s pretty clear there are some people in the media that look at it as the elite teams are the ones that should get recognized and not those teams that haven’t been recognized in the past," Kelly said. "That’s a shame.

"I think there’s a strong vocal contingent out there that even with the data that has been presented with Cincinnati being fifth in the county, there are some people that still don’t think that Boise State or Cincinnati or TCU or any of those schools that still don’t have that pedigree should be part of the conversation."